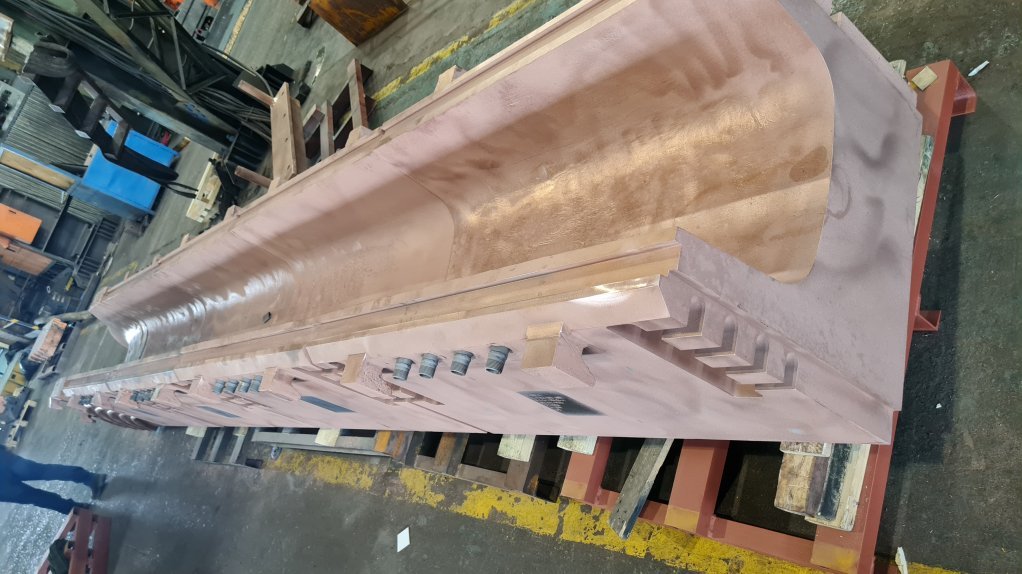 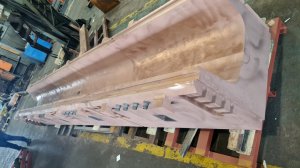 COPPER CHUTE The copper components for a new German client requires the use of raw, pure copper

South Africa-based foundry and engineering company Thos Begbie has shipped the last of three batches of copper furnace components to a metal smelting and recycling firm in Germany.

The third and final batch was shipped last month and arrived at its destination on time.

The supply contract, which is one of Thos Begbie’s newest projects, entails the export of about 40 000 kg in copper components to a new client.

The opportunity arose after one of Europe’s major furnace component manufacturers closed its doors in 2020, consequently leaving the metal smelting and recycling firm in need of components for a planned maintenance shutdown and rebuild last month.

“We were able to capitalise on the opportunity as an already registered vendor to the company, whereby we voluntarily offered a request for quote,” says Thos Begbie sales engineer Esli Bantjes.

The supply contract, which is for a furnace rebuild, is scheduled to take place in different stages and, as such, has been divided into three packages.

Using airfreight allows for the components to be shipped from the Thos Begbie facility in Middelburg, Mpumalanga, to Germany within four to seven days, including road transport to the respective airports, custom clearance and, finally, transport to site.

Bantjes stresses that the components being supplied had to adhere to certain criteria, such as high conductivity and grain structure size, which meant that recycled copper could not be used.

“The highest purity of copper cathode is melted down to achieve the high-quality standards for these castings,” he says.

The copper components that Thos Begbie is manufacturing are mainly for the tapholes on the client’s flash furnace. The components range from tapping launders to taphole blocks with the accompanying tapping inserts.

The components, once supplied, will play a vital role in the furnace, as they serve as the conduit in which the molten material is transferred from the main flash furnace to the slag cleaning furnace.

The components are also used to ultimately skim the slag off the molten materials.

Thereafter, the slag is processed using an alternative operation to reclaim copper deposits, which might still be contained in the slag material.

Historically, end-users prioritised factors such as improved productivity and profitability; however, safety is now as key a consideration as enhanced profitability.

“It is no use meeting, for example, a production target, if it results in plant or equipment failure or fatalities,” Bantjes adds.

Further, modern furnace designs are conducted with safety in mind while maintaining the requirements for increased productivity.

Bantjes says the majority of failures of smelter furnaces occur at the matte and slag tapholes, where a burn-through is more likely to happen.

The tapholes used to be cooled by cooling passages situated all around the taphole, but as the molten metal is tapped, erosion takes place on the tapholes, especially on the bottom face, he explains.

“This resulted in molten metal coming into contact with the cooling water, which, ultimately, results in an explosion because of the rapid expansion of water as it is converted into steam.”

The explosion could either be localised or could result in an end-wall collapse that results in all the molten metal spilling out.

To combat the possibility of explosions, the tapholes and launders are now designed so that there are only cooling channels in the sides of the components, which eliminates the possibility of molten material coming into contact with cooling water, should a burn-through occur.

Alternative cooling mediums, including ones that “merely evaporate” when in contact with a high-temperature molten metal, are also being explored, he enthuses.

“At Thos Begbie’s facility, we use state-of-the-art simulation, machining and testing software to ensure that the end-product aligns with the requirements of the customer,” Bantjes says.

The company is also involved in various design houses to conduct research and development aimed at developing technologies for a safer and productive product.

The difference between a drill-and-plug cooler and a copper-cast component is merely grain structure size, states Bantjes.

The copper block is rolled to the required thickness, before production, thereby compacting the grain structure.

Drill-and-plug coolers are manufactured out of the hot rolled copper slabs, where water passages are drilled into the slab, and the ends are plugged so that the end-product has an inlet and an outlet.

The difference is that the copper-cast components will have an embedded cooling circuit constructed out of a copper alloy that bonds with the molten copper poured into the moulds.

This method allows for the versatility of manipulating the cooling circuit where it would be difficult to drill a water passage.

The added benefit to using an embedded cooling circuit coil is the extra layer of protection it provides, should a burn-through occur, Bantjes concludes.