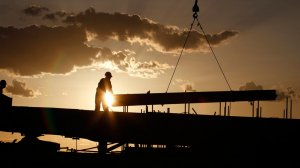 The Thiess-led contract will include the construction of a box cut and the development of twin declines, incorporating a service and a conveyor tunnel. The project is starting this month and is scheduled for completion in 2020.

“This project is key to unlocking Oyu Tolgoi’s potential and is a great addition to Thiess’s diverse mining portfolio,” Cimic executive chairperson and CEO Marcelino Fernandez commented on Wednesday.

Thiess MD Michael Wright said the partnership with Khishing Arvin, which would hold 20% in the JV, would assist the contractor to build local capability, with about 90% of the workforce on the project expected to be Mongolian.

In June, global engineering group Jacobs Engineering was awarded the engineering, procurement and construction management contract for the underground development, setting a project timeframe of five to seven years.

Considering that about 80% of the mine’s value resides underground, with copper grades about three-and-a-half times higher than the openpit, the underground mine is key to Oyu Tolgoi and Rio Tinto’s copper growth ambitions.