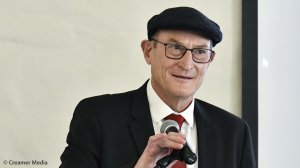 After 22 years with the Wits School of Mining Engineering, Wits Mining Institute director Professor Fred Cawood is planning to retire at the end of May, starting what he calls his “second life” at the age of 60.

He explains that the theory behind a “second life” is based on Japanese work ethics and that one enters a new period in their life once they reach the age of 60, having learnt from past mistakes and intending to do better in their retirement.

Head of the school, Professor Cuthbert Musingwini says Cawood’s time at the school has been his “hard yards” in reference to the hard work and dedication he put into his work.

Musingwini adds that Cawood will leave the school in a “very healthy position”, with his having inherited it from Cawood (who used to be the head of the school) in a manner that meant it was easy for him to steer onto a growth trajectory.

“You were so passionate that it appeared sometimes as if you were throwing your toys out of your cot – that is the extent of the passion you had and what was needed for people to grow and ensure that the school continues to be what it is,” says Musingwini.

He also thanks Cawood’s wife, Antoinette for allowing Cawood to often sacrifice family time to the school.

However, Musingwini adds that a peculiar thing with career academic jobs is that they are difficult to leave. “Even though you think you might have left, you will never truly retire.”

An example of this is Professor Richard Minnitt, who Musingwini points out retired many years ago and supervised Cawood’s PhD paper, but who remains at the school as a visiting professor, conducting lectures and marking papers.

“Although you are retiring, officially, you will still continue. Thank you for availing yourself for that role of being a visiting professor so that you can continue to supervise most of our post-graduate students, says Musingwini of Cawood.

“[The Wits Mining Institute] culminated in the establishment of the DigiMine programme, under [Cawood’s] leadership with the aim of shaping the mine of the future and embracing the Fourth Industrial Revolution.”

He adds that he has always admired Cawood’s passion and commitment to mould talented mining engineers who, once they pass through the school, possess a sound theoretical understanding of mining engineering principles, coupled with a strong appreciation of how to apply the theory in practise.

While the DigiMine is still in its early days, Froneman says he has no doubt that the vision Cawood has launched will leave a legacy that everyone in mining education can be proud of.

“We are immensely grateful for the immense contribution that you have made towards professionalising and modernising the mining industry and I would like to share my best wishes for a well-earned retirement,” he says.

Minnitt lauds Cawood’s “huge contribution” to not only Wits University, but also to the entire mining industry, its institutions and the development of many people’s skills.

He adds that the way in which Cawood tackled his PhD was “absolutely fantastic”, and that the education material produced by Cawood all those years back is still being used as benchmark research today. This included work on mining regulations and mining royalties.

“Those were outstanding pieces of research and documentation, and I still use them, we still go back to them every year – there is stuff embedded in there that is just irreplaceable, and I really appreciate that from [Cawood],” says Minnitt.

“I am not sure what the future holds for Fred, but I guess there will be quite a lot of work involved in helping countries arrange and organise their mineral policies and that sort of thing. I trust that it will be a time of growth and development for [Cawood],” says Minnitt.

During his time at Wits, Cawood also established and coached, for a brief period, at least on season, a mining school rugby team, as well as established a mining choir that proved to be quite popular.

One of his personal best achievements was establishing board games events that were held during Wits sports events. These were important because he notes that only 30% of the school’s students came from Gauteng and these games served as important social events to build cohesion and fostered relationships between students.

“I promise you, at the chess games, there was more shouting around the chess board than on the soccer field.”

However, Cawood says it will be difficult to leave the school of mining. “It gets to you and becomes part of you and before you know it, it has sucked you into everything it is doing.”