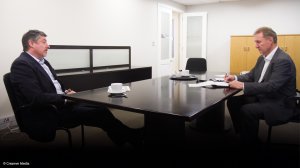 Presenting a narrowed cash loss of $21-million in the 12 months to June 30, compared with the $68-million loss of last year, Brown said that the Makhado project represented a significant potential step-change for the company, on top of the production of semi-soft coking coal and thermal coal from the modified Vele plant in Limpopo, which have been given the thumbs up by both steelmaker Arcelor Mittal South Africa and State electricity utility Eskom.

Equity capital will fund the $23-million plant modification at the dual-product, 50-year Vele, which is expected to ramp up to 2.7-million run-of-mine coal a year from the third quarter of next year.

An incoming strategic partner will be introduced to fund the full equity requirement for Makhado, where CoAL will retain majority ownership in a part debt structure.

“While Vele represents our short-term aspirations, the real excitement for the company is around Makhado,” Brown told Mining Weekly Online in a video interview (see attached).

The incoming strategic partner will hold 20% to 23% of the shares in the project company and the black economic-empowerment (BEE) shareholder 26%.

While 6% of the BEE holding is available as an employee share ownership plan, the 6% may also be used to create black industrialists in line with government aims.

The hard coking coal produced may find growing domestic offtake following the announcement of Trade and Industry Minister Dr Rob Davies that the Hebei Iron and Steel Group of China is to partner South Africa’s State-owned Industrial Development Corporation (IDC) in the development of new steelmaking capacity in Limpopo province.

Hebei and the IDC have signed a memorandum of understanding outlining the Chinese steel group’s intention to take a 51% stake in the steel mill, which may begin production by late 2017. Construction on the project is scheduled to begin in 2015 and part funding is expected from the China-Africa Development Fund.

IDC CEO Geoffrey Qhena has reported that a detailed feasibility study into the planned $4.5-billion, two-phase steel project should be completed in the first quarter of 2015.

CoAL, which ended the period with cash of only $2.1-million, is about to raise $65-million equity plus $23-million from the sale of its noncore Mooiplaats colliery, which is expected to provide it sufficient working capital for the next 18 months.

Investec Securities said that all the conditions for the first-stage of the placement for $23.4-million of equity capital are in place.

“We remain particularly positive on Makhado, which could stand to benefit from an expected future turnaround in the metallurgical coal market,” Investec mining analysts added in a note.

There are no producers of hard coking coal in South Africa currently and local steel producers are required to import hard coking coal, which uses up precious foreign exchange and effectively costs more to bring in from Australia and the US than it would to source from the Limpopo province.

“We believe we can play a pivotal role to lower the cost of inputs into the production of steel in South Africa, which is a good benefit for industrialisation in South Africa,” Brown told Mining Weekly Online.

CoAL would be able to introduce 2 500 jobs into the economically under-developed Limpopo during the construction phase of the Makhado project and 1 100 permanent jobs once in steady state.

“We’re very excited about this particular project,” he added.

The economic benefits from hard coking coal in the next few years were expected to be substantial, which would allow social uplift of the area, where the company had signed a memorandum of agreement with the community.

Front-end engineering and design for the Vele Colliery plant modification project is being engineered by project house Sedgman and the Makhado project has received environmental authorisation under National Environmental Management Act and the environmental-impact assessment (EIA) regulations from the Limpopo provincial government.

In the 12 months to June 30, CoAL repaid the remaining $12.5-million of its bank facility from Deutsche Bank and secured a $21.4-million, 18-month credit facility from Investec Bank, and legacy issues that have plagued its ability to create value for the last few years have been removed.

Shareholders have voted overwhelmingly in favour of an equity placement of up to $64.9-million.

CoAL has finalised the public participation for EIA phases for the Generaal, Chapudi and Mopane projects, which form part of the long-term greenfield Greater Soutpansberg project, where there are also hard coking coal resources and which also has potential for positive job-creation and social-upliftment benefits.

Hard coking coal attracts a price premium over themal coal because of its relative scarcity.

CoAL CFO Michael Meeser said that while all noncore assets had been sold off, only the proceeds from the NuCoal sale had been received.

Meeser described the company as still being in the batten-down-the-hatches stage while it waited for markets to improve and the strategy to be completed.

Cash burn in the 12 months to June 30 totalled $42-million compared to the comparable period last year when the cash burn was $138-million.

CoAL ended its financial year with a free cash balance of just over $2-million and is taking steps to complete the equity raise to augment its cash resources.

The company continues to have significant unrealised foreign exchange losses against the background of the accounts being reported in US dollars but the company loans from the holding company down to the subsidiaries being rand denominated.

When those loans are revalued back into dollars, losses are shown as a result of worsening rand weakness.