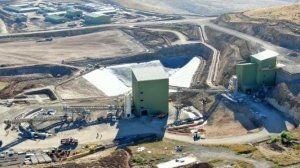 The Öksüt mine in Turkey

Toronto-listed Centerra Gold’s share price tumbled nearly 22% on Wednesday, as the company lowered its 2022 production outlook following the suspension of certain operations at the Öksüt mine, in Turkey.

Gold room operations at the ADR plant at Öksüt have been suspended since early March, owing to mercury detection. The company suspended stacking and leaching this month and is now considering suspending mining and crushing too.

“The company has completed engineering work and ordered equipment to retrofit the ADR plant for safe operation within the gold room at the Öksüt mine, with all equipment expected to be installed by late 2022,” reported CEO Scott Perry.

He said stacking and leaching had been suspended while Centerra pursued an amendment to its environmental-impact assessment to align permitted limits with current operational plans.

The potential suspension of mining and crushing activities would impact on 2022 results. “The company will continue to seek requisite approvals to recommence full operations as quickly as possible.”

As a result of the suspension of certain activities at Öksüt together with the continuing impact of declining copper prices at the Mount Milligan mine, in Canada, Centerra revised its consolidated 2022 gold production to between 245 000 oz and 265 000 oz. This compares with a previous guidance of 400 000 oz to 450 000 oz.

In the second quarter, gold production of 42 728 oz was solely from the Mount Milligan mine. At Öksüt, 58 469 recoverable ounces were stored as gold-in-carbon inventory at the end of June. Copper production for the quarter was 17.4-million pounds.

Owing to no gold ounces sold at Öksüt and lower copper by-product credits at Mount Milligan, AISC on a by-product basis increased to $1 659/oz.

The company ended the quarter with a net cash balance of $723.3-million. Based on the strong financial position, the board approved a quarterly dividend of C$0.07 a share on August 9.

“Despite a challenging quarter, we continue to see strong operational future for our existing mines and anticipate that this will be reflected in our financial performance in 2023. We look forward to completing our 2022 drilling program at the Goldfield project [in Nevada], and publishing a resource update in 2023 and a feasibility study thereafter,” said Perry.