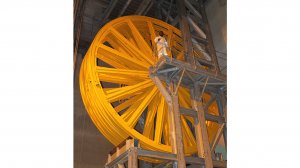 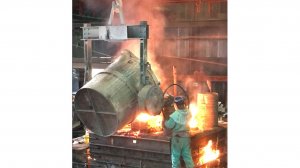 NICHE CASTER KEW Foundries remains the only manufacturer in Africa of cast headgear sheave wheels for the mining and industrial industries
CASTING VS. WELDING Casting allows for design flexibility such as reducing the mass or increasing the strength of mining sheave wheels

The company – which has been in operation in South Africa for 125 years – remains the only manufacturer of cast headgear sheave wheels for the mining and industrial industries in Africa, states KEW Foundries operations director Jaime Goncalves.

KEW’s casting background and extensive experience in the foundry and casting industry have resulted in the company’s accumulating a “vast amount” of industry know-how, which has enabled it to manufacture headgear sheave wheels that Goncalves describes as the “Rolls-Royce” of mining application sheave wheels used in vertical transport infrastructure. He states that cast sheave wheels are ideally fabricated to reduce mine shaft maintenance costs and increase shaft longevity.

Using the accumulated experience gathered in producing these safety critical products for the mining industry, KEW has increased its market share in other manufacturing sectors in South Africa that service the mining and heavy engineering industries. Goncalves states that, from its present location in central South Africa, KEW services original-equipment manufacturers (OEMs) in the materials handling industry, rolling elements industry, pumps and valves industries and driven machines industries, to name just a few.

“With the growth in servicing these industries, KEW’s attention to customer service, product quality and delivery has led to KEW being one of a few South African foundries which has achieved ISO 9001:2015 accreditation.”

Coupling the use of simulation software solutions to assess new sheave wheel casting designs and other complex OEM castings, KEW is positioning itself to be a preferred supplier to the mining end-user and supporting sectors.

Goncalves explains that other manufacturers of sheave wheels use welding technology as a means of manufacture to join all loose steel elements, such as the spokes and rim to create a sheave wheel. This mode of manufacture limits the designer of the welded construction to available steel sections within the steel supply chain.

In contrast, KEW cast sheave wheels are fabricated by melting down scrap metal using industrial furnaces and chemically altering the metallurgical and mechanical properties to fit the specific operating requirements of the material specifications and those of a project.

Once the ideal chemical consistency of the metal has been achieved, the molten metal is then poured into a mould that can be produced to suit any industry application or requirement. This, adds Goncalves, allows for design flexibility, such as reducing the wheel mass or increasing its strength.

Further, using a pattern to produce the moulds allows for repeated casting consistency of the sheave wheels, which is “a remarkable benefit”, as it guarantees sheave wheel quality and delivery, says Goncalves.

During the casting process, KEW adds a suitable amount of carbon, and other elements, to the molten scrap metal. Once the sheave wheel is solidified, machined, assembled, installed and operating, the wearing characteristics between the sheave wheel and the rope are beneficial to the life of the rope. During the wearing of the sheave wheel rim, carbon in the form of graphite flakes coats the rope thereby reducing the friction between the two dissimilar materials. The graphite acts as a natural lubricant, subsequently mitigating the damage done to the winder ropes, ensuring the extended longevity of a mine rope and resulting in reduced overall cost of the capital equipment.

Goncalves states that the company has sold approximately 5 000 sheave wheels to mining operations worldwide in the past 20 years. Although the global mining industry is “stuck in a repair and maintenance rut”, which has slowed orders in recent months, KEW’s cast sheave wheels remain a popular offering to the market, he adds.

KEW is an accredited supplier of sheave wheels to all major mining groups in South Africa and has exported wheels to several countries outside Africa, including the US, Australia, Canada, Chile, Brazil, Finland, Mongolia, India, Russia and the Philippines.

Goncalves explains that Africa represents KEW’s largest installed and operational base and among all the global installations, KEW’s sheave wheels have been proven in all types of weather, extreme temperature and operational conditions.

“KEW prides itself on its customer aftercare and service,” Goncalves stresses, noting that the company understands that extended periods of downtime are costly and unacceptable for mining houses. The company prioritises safety and consumer care to help mitigate costly shaft complications, and offers on-site inspections to gather pertinent data to design its sheave wheels.

Goncalves concludes that KEW is continually seeking new ways of improving wheel designs and reliability, as well as efficiency to produce a product that requires less maintenance and reduces downtime.

By: Paige Müller
Amid a shrinking South African mining market, Vereeniging-based furnaces and industrial services provider Dickinson Group of Companies states that an extensive focus on extending its service offerings to the international market has been a key strategic success that has insulated the company against the negative effects of local market fluctuations. Dickinson Group sales manager Brighton Mapiku states that unpredictable commodity prices, aging infrastructure, reserve depletion and accidents that have raised costs and curbed output in South Africa, have made the local mining market unstable in terms of market demand for the past few years. He explains that Dickinson Group caters for the furnace turnkey installation, refractory maintenance, refurbishment and demolition requirements of the local mining industry. →