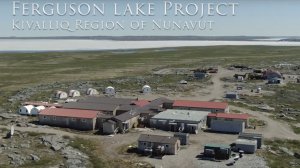 With significant demand and potential in Canada for high-grade palladium, platinum, rhodium, copper, nickel and cobalt, Canadian North Resources Inc. (CNRI) is at late-stage exploration and development of its mining property in the Kivalliq region of Nunavut, in Canada, namely the Ferguson Lake project.

These estimates are for the West and East Zone, and the West Extension Zone that are less than 6 km in length along a 15 km mineralised horizon. There are multiple target zones for massive sulphides and distinct low-sulphide zones for platinum group metal (PGM) mineralisation.

The project in the Western Churchill province has diverse geological environments spanning 1.5-billion years and is host to gold and base metal deposits, prospects and mining operations.

In comparison, Australian miner Wyloo Metals' Eagles Nest project, in James Bay, Ontario, in Canada, has reserves within vertical mineralised pipe of between 60 m across and 200 m in length, hosted by granodiorite.

Both projects have great potential though noticeable differences in indicated and measured categories of mineral resources, though CNRI is confident that its Ferguson project “has greater potential owing to its significant open-pit resource”.

“The Nunavut regulatory authorities have approved the building of roads and the operation of open-pit mining at the Meadowbank gold mine north of Baker Lake, so this is a viable option,” the company tells Mining Weekly.

In comparison, CNRI explains that the economics in the Eagles Nest final feasibility report incorporates the Ontario government paying for the building of a road to its mine site.

Bearing this in mind, the company notes that “there is a probability of government financial assistance to the Ferguson project for the transportation of concentrates and supplies to either Baker Lake or Arviat”.

Overall, considering the various elements of both projects, CNRI’s Ferguson Lake project is better positioned to feed into demand for critical metals, which are increasingly being used in the clean-energy and high-tech industries worldwide.

Taking this into account, CNRI states that Ferguson Lake is positioned more favourably for growth and demand as the just energy transition gains momentum, though more so in combination with all the base metals, such as nickel and copper, and the environmental and industrial added value of palladium and platinum.

Previous mineral deposit modelling and re-examination of historic resources for the main West Pit and West Extension Zones has shown that enlarged pods of base metals (BM) and PGMs mineralisation are present within massive to semi-massive sulphide lenses and stringers within zones with thicknesses of between two and tens of metres.

As previously indicated, the company’s plan is to further test and expand the BM and PGMs resource by focused diamond drilling exploration for high-grade sulphide zones and low-sulfide PGMs-enriched targets along the mineralisation belt, to expand metallurgical testing, to update the technical report and to advance the project to prefeasibility stage.

These work plans are scheduled through 2022 and 2023 with expectations for dedicated definition drilling, environmental studies plus metallurgical testing and development activities into 2024 and beyond.

Overall, CNRI says the Ferguson project’s resources evaluation and exploration will target diamond drilling the upgrading and adding of resources down dip and down plunge to the west in the West Zone.

There will also be drilling along strike to the west and east at shallow depths in order to upgrade and expand the open-pit resource bodies, as well exploration targeting of prospective zones outside the main mineralized horizon.

CNRI’s directors and advisers bring to the project immense competence and knowledge in technical, operational, political and corporate social responsibility.

CNRI maintains strong ties of communication, consultation and community engagement with the Kivalliq Inuit Association, Federal and Territorial permitting agencies and residents of local hamlets in the region.

Click here to watch a video of CNRI's project overview.