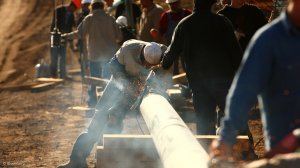 TORONTO (miningweekly.com) – The new Pipeline Safety Act has come into force in Canada, heralding a new era of absolute liability for pipeline owners and operators and setting out financial resource requirements to pay for all costs related to a spill or rupture.

The National Energy Board (NEB) on Monday welcomed the Pipeline Safety Act, which first received Royal Assent on June 18, 2015. This also resulted in changes to the NEB Act and to some extent the Canada Oil and Gas Operations Act.

According to the NEB, the most significant changes to the the Pipeline Safety Act (Bill C-46) related to absolute liability and financial resource requirements, abandonment, pipeline releases, damage prevention, as well as audit and enforcement powers.

The absolute liability provisions in the Pipeline Safety Act applied to the company that owned the pipeline, not landowners or other companies such as incorporated farms.

The NEB stated that it would hold the company that owns the pipeline, and not farmers or other parties, responsible for any clean-up costs in the event of a spill or rupture.

FINANCIAL OBLIGATION
The Pipeline Safety Act put in place new measures to help ensure that pipeline companies held enough financial resources to pay these types of costs in the event of a spill or rupture. NEB-regulated companies operating pipelines that had the capacity to transport at least 250 000 bbl/d of oil would from now on be liable for all costs and damages for an unintended release, of up to C$1-billion, regardless of fault.

According to the NEB, each of these companies had submitted a plan explaining how it proposed to meet the C$1-billion of financial resources.

The remaining pipeline companies under NEB jurisdiction would have absolute liability limits set through regulations currently being developed by Natural Resources Canada.

The new regulations also provided improved provisions for damage prevention, which laid out obligations of those planning construction of facilities, ground disturbance activities or vehicle or mobile equipment crossings in the area of an NEB-regulated pipeline, as well as the obligations of pipeline companies.

Further, the NEB’s jurisdiction had also been expanded to provide oversight of pipelines post-abandonment. Companies will remain liable for post-abandonment costs and damages. It also provided the NEB with new powers for inspection officers, and new authority to assume control of an abandoned pipeline if a company was not complying with a NEB order.

Under the new regulations, the Governor in Council had also been provided the authority, in the event of a pipeline release, to ‘designate’ a company if it either did not have the ability to pay for the release, or did not comply with a board order, and for the NEB to take over spill response.