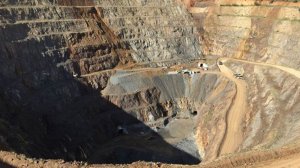 Gold ore mining company Galane Gold announced earlier this month that it had completed the sale of its Mupane gold mine to majority citizen-owned company Hawks Mining Company.

Mupane gold mine, located about 30 km south-east of Francistown, is the only gold mine currently in operation in Botswana.

The full details relating to the transaction were set out in a press release published on February 7, 2022, and as of May 3, 2022, all the conditions for the completion of the transaction have been met.

“As the cornerstone of Galane Gold for the last 11 years, Mupane mine has been a critical part of our operations and a springboard to other opportunities, while also providing certain challenges to enable building a strong executive team,” said Galane Gold CEO Nick Brodi.

He added that Galane Gold transitioned Mupane from an openpit, short-term, high-cost producer to an underground mine, with an extended life and significantly reduced operating costs.

Additionally, the company has now leveraged those skills to put Galaxy mine, in Mpumalanga, South Africa, into commercial production, and endeavours to do the same at its Summit mine, in Grant County, New Mexico, in the US.

“The transaction also significantly improves our balance sheet and provides an opportunity for Galane Gold to provide a greater return to its stakeholders,” he added.

“We thank Galane Gold for the support they have provided in helping us complete this transaction and look forward to their continued guidance,” said Hawks Mining representative and Mupane mine GM Cedric Sam.

He noted that the transaction was a “very exciting and important” event with the only producing gold mine in Botswana being transitioned into a majority local ownership.

“This is a significant first step for Hawks Mining, who, like Galane Gold, intends to build a team to take on other opportunities, specifically in Botswana.”

“I would like to reiterate that our experience with Mupane in Botswana over the past 11 years has been outstanding in every respect,” commented Galane Gold chairperson Ravi Sood.

He added that, while the company is sad to be leaving such a constructive and progressive country, it is pleased to be part of a transaction that will result in one of the largest businesses in the country becoming wholly owned by the local management team.

Galane Gold is an unhedged gold producer and explorer with mining operations and exploration tenements in South Africa and the US.

It is a public company, and its shares are quoted on the TSX-V as well as the midtier over-the-counter equity market.

The company concludes that Galane Gold is committed to operating at world-class standards and is focused on the safety of its employees, respecting the environment, and contributing to the communities in which it operates.