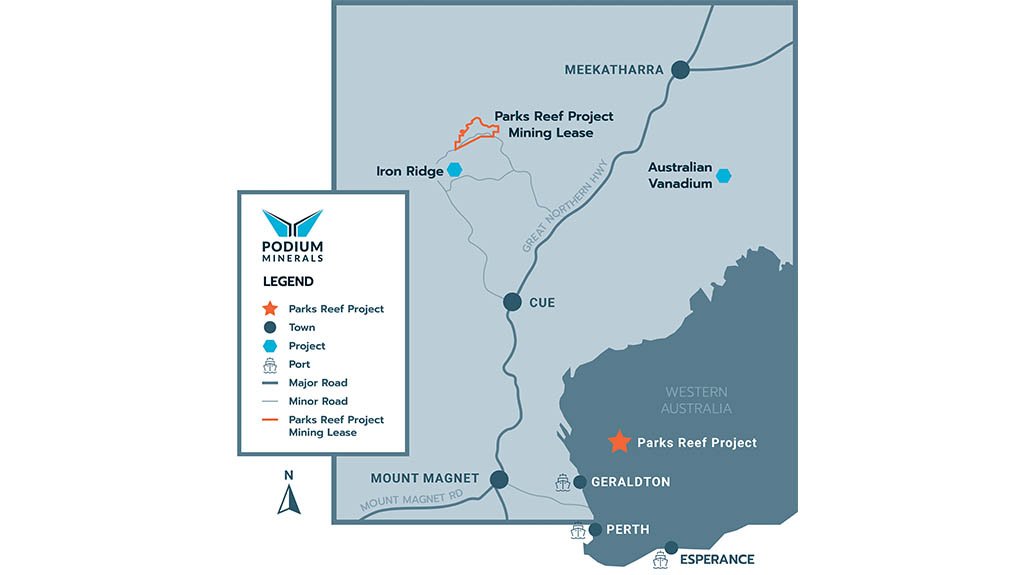 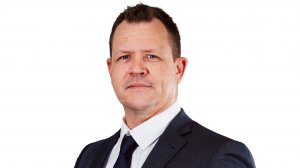 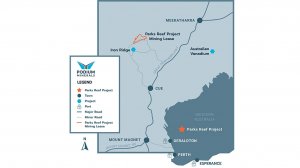 JOHANNESBURG (miningweekly.com) – Australia’s platinum group metals (PGMs) pioneer, Podium Minerals, is evaluating the cleanest and greenest mining and processing options that include the possibility of circumventing the need for smelting.

The Australian Stock Exchange-listed exploration and resources development company, which is placing major emphasis on environmental, social and governance (ESG) considerations, has just completed a conceptual study as part of an update of its six-million-ounce Parks Reef resource base in Western Australia. (See attached map.)

“We're entering our study phases at the moment,” said Podium MD and CEO Sam Rodda, who spoke of Podium being well placed to enter production within the end of this decade, aligned with an envisaged platinum demand pinch point. (Also watch attached Creamer Media video.)

“We're well placed with a significantly large orebody. We've been able to grow it,” Rodda outlined to Mining Weekly in a Zoom interview.

“We're looking at smelterless processing. We have the right team in place and I think this is really the start for Podium Minerals, but it's also the start for Australia and Western Australia as a growing PGMs jurisdiction moving forward,” Rodda enthused.

The orebody, which offers a mix of platinum, palladium, rhodium, iridium, gold, copper, nickel and cobalt, has a 15 km strike, a width of up to 20 m, and remains open below 500 m.

Within the reef package, higher grade hanging-wall and footwall zones provide an opportunity for elevated kick-off margins, which the company is considering taking up.

In addition to PGMs flotation concentrate, downstream processing developments have proven that high metal recovery of the eight payable metals can be achieved using atmospheric leaching, culminating in product suitable for refinery feed.

Additional benefits include higher metal payables as well as the ability to reduce the project’s logistics costs.

“For us, having a very long and potentially very deep and large PGMs orebody, it is important to start small, start building cash flow and confidence in our PGMs operation in Australia, before really ramping up and kicking production rates, or more marginal ounces moving forward.

“High-grade zones give us optionality and help us with managing some of the highs and lows which the market still might see in the next ten years,” said Rodda.

On the technology front, indications show that smelterless metal recovery from the leach solution of an atmospheric leach process can produce a PGMs product suitable for refinery feed, which translates into lower transport costs from Western Australia to a global PGMs refinery.

In Rodda's view, demand from the internal combustion engine (ICE) market has still to peak. With increasing emission standards, he foresees ICE vehicle demand extending to the end of the decade, coupled with a slow tailing-off beyond 2030.

“We think demand will be really strong for PGMs in the existing supply space, but equally we're very positive around the future demand on PGMs for green hydrogen production, hydrogen electricity through PEM electrolysers, which are heavy users of PGMs, and then commencement and growth of fuel cell vehicles.

“We think the demand will stay strong and we look forward to seeing what the world looks like in the next ten years. We think the broader world will really need to start thinking where new sources of PGMs will come from,” added Rodda.

Mining Weekly: What is the likelihood of Podium opting to launch with higher grade mining to optimise kick-off value?

Rodda: Whilst we have similarities to some of the reefs in South Africa and some parallels with Merensky reef, our total reef package is between 10 m and 20 m wide. Within that reef package, we do have higher grade zones on the hanging wall and footwall side of our orebody, which will enable us for higher grade, higher return and higher margins going forward. For us, having a very long and potentially very deep and large PGMs orebody, it is important to start small, start building cash flow and confidence in our PGMs operation in Australia, before really ramping up and kicking production rates or more marginal ounces moving forward. In summary, high-grade zones give us optionality and help us with managing some of the highs and lows which the market still might see in the next ten years.

What would be the advantages of a smelterless approach to the processing of your platinum group metals and base metals?

It's a very timely question. We've just released our processing update to the market here in Australia and step one for us was testing whether or not our ore could produce a sulphide flotation concentrate, which we're happy to report it can. But, equally, along the lines of a smelterless product, we are also pursuing our preferred processing route, which is using an atmospheric leach process, which is looking at producing a significantly high grade PGMs product, with really strong early indications, to enable us to chase higher payabilities of our metal-in-product, as well as significantly reducing the logistics cost from the middle of Western Australia to a global PGMs refinery. With ESG and reduced electrification, the carbon footprint of our PGM products should be significantly reduced. We see three major ticks in that area and we think Parks Reef and Podium are well placed to take advantage of all three.

These days, we hear a lot coming out of the world, and also Australia, about green hydrogen electrolysers and green hydrogen fuel cells. Is it this, perhaps, that has prompted Australia to declare platinum group metals as critical metals, along with countries such as the United States, Japan, India and the Eurozone?

I definitely think that's part of the story. Globally, the world is looking to identify what is the suite of green metals and critical metals to support a decarbonised world and PGMs, being a critical element in electrolysers for green hydrogen production and hydrogen energy, is significantly important, so I think that’s part of the story. With supply disruptions caused by Russia's invasion of Ukraine and Covid-related impacts to global supply chains, we're also seeing different continents looking to secure scarce and rare metals. Those two, hand in hand, really focus each of those continents around understanding where they source PGMs from and what alternate avenues there are from existing supply routes.

PGMs help the world to be a greener place but how green does Podium aspire to be as an opencast and/or underground miner?

In Australia particularly, but globally, mining has a duty to significantly consider ESG and cleaner mining moving forward. So, heading into the study period, absolutely we'll evaluate the cleanest and greenest options through our study work, and as we head into production, we want to make sure that we consider the smallest carbon footprint possible, as well as engaging other stakeholders along our journey for a broader ESG perspective. We're excited to come in at a stage where we can influence the outcomes right at the start, rather than inheriting an old mine and rebadging it with that lens. I think it's hugely important.