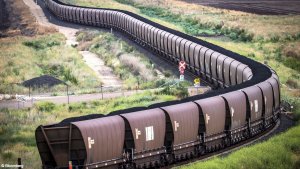 More than $500-million worth of Australian coal and about  ,000 crew on the ships are stuck after China blacklisted a wide swathe of Australian commodities and foodstuffs, amid what Morrison described on Thursday as an “extraordinary period” in the relationship.

“We will work the process through with the Chinese government to get the best possible outcome that we can,” Morrison said in an with Nine Network television. While he said “there are obviously tensions” in the relationship, they wouldn’t be “resolved by Australia surrendering its sovereignty.”

Mending ties won’t be easy: Morrison’s ministers have had no direct contact with their counterparts in Beijing since at least April. That’s when Australia exacerbated existing grievances with China by calling for independent investigators to be allowed into Wuhan to probe the origins of the coronavirus.

As well as the deadlock over Australian coal, Beijing has placed crippling tariffs on Australia’s barley exports, halted beef imports from several large meat plants, warned its citizens against holidaying or studying in Australia and ordered traders to stop buying at least seven commodities including copper and wine.

China, which said Wednesday that the coal shipments were delayed due to strengthening of examination and testing of the imports, has become increasingly vocal in recent weeks in saying Australia is to blame for strained ties.

“The root cause of the deteriorating bilateral ties is Australia’s repeated wrong acts and remarks on issues concerning China’s core interests and major concerns as well as its provocative and confrontational actions,” China’s embassy in Canberra said in a statement posted on its website on Monday. “Those who have caused problems should be the ones to solve problems.”

Beijing toned down that rhetoric somewhat this week after a speech by Morrison in which he said that Australia did not seek to contain China economically, and that China had pulled more people out of poverty than any other nation. A Chinese diplomat in Canberra last week gave a document to Australian media outlets outlining 14 grievances and accusing the nation of “poisoning bilateral relations.”

‘IT IS MISTAKEN’
Australia’s top diplomat Frances Adamson said in a speech in Canberra on Wednesday night that “China may have reached a point where it believes that it can largely set the terms of its future engagement with the world.”

“If it has, it is mistaken-- and that is because there is far more to be gained for China, and for everyone else, through working constructively and collaboratively within the international system, without resort to pressure or coercion,” said Adamson, who is secretary of the Department of Foreign Affairs and Trade.

Morrison is seeking to create a buffer against what his government sees as an increasingly assertive China under President Xi Jinping’s leadership by bolstering multilateral forums of “like-minded” liberal democracies in groupings such as the Quad and Five Eyes.

“Of course we want happy co-existence and positive relationship with China,” Morrison said on Thursday, adding that it was “not simple” to walk a middle path between China and the US.

“But we also have a wonderful alliance with the US and a friendship with them as like-minded countries with a similar outlook with liberal democratic values,” he said. “And then we have our core national interests as well. And we want to see all those managed together.”