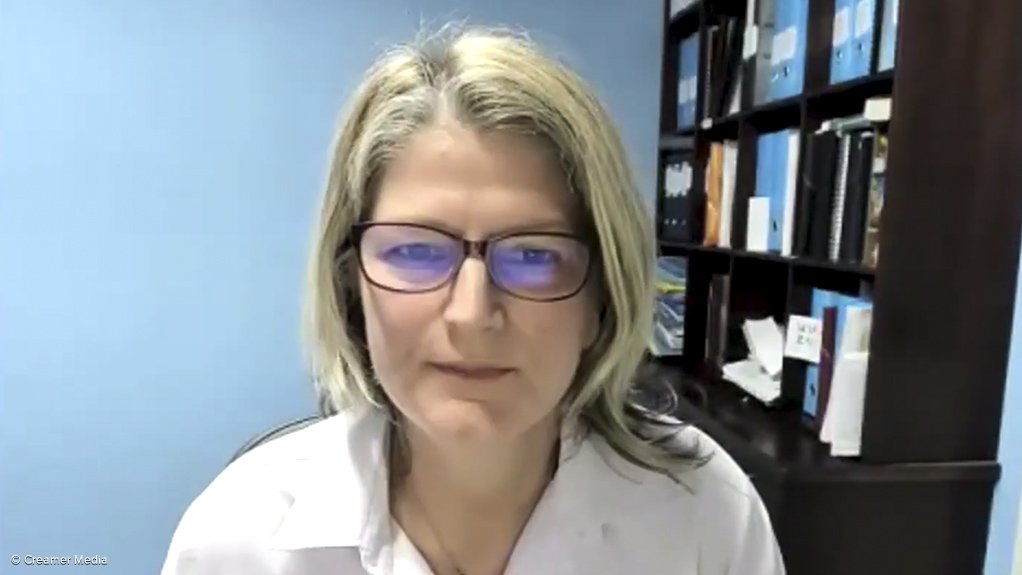 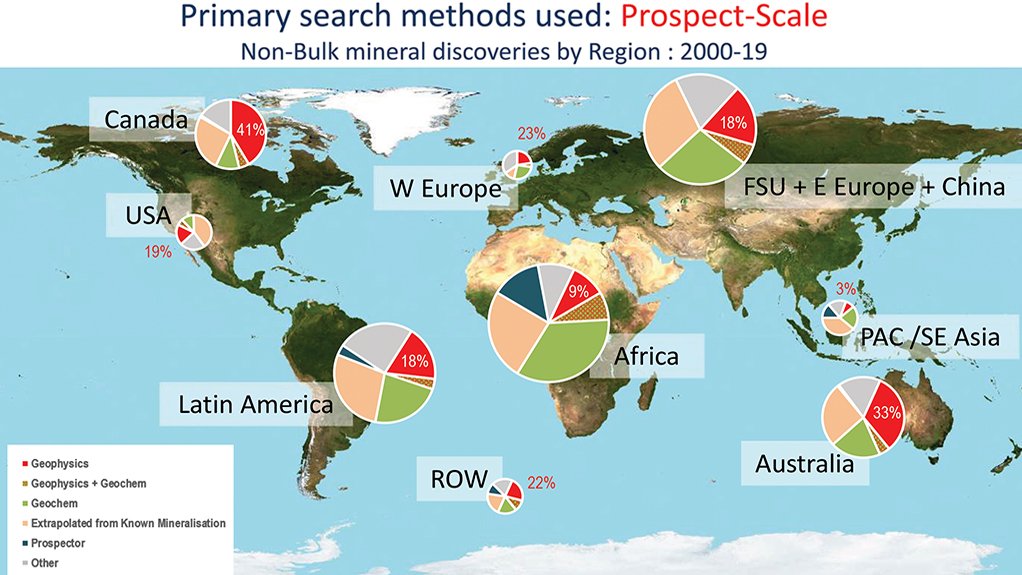 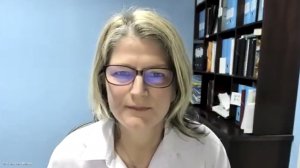 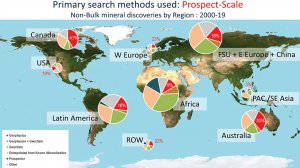 Photo by Creamer Media
Exploration Geological Consultancy MD Regina Molloy
Red is geophysics, brown is geophysics and geochem, cream is extrapolated known mineralisation, green is the prospector discovery, and grey is the other.

“Geophysics is now key to the exploration industry, particularly for metalliferous-type deposits, which have the largest value,” Exploration Geological Consultancy MD Regina Molloy said in a presentation to South Africa’s Overberg Geoscientists Group on how South Africa’s exploration and minerals potential can be unlocked.

Molloy was speaking against the background of Mineral Resources and Energy Minister Gwede Mantashe setting a target for South Africa to move from 1% of global exploration dollars to an ambitious 5% within the next five years, and Department of Mineral Resources and Energy (DMRE) director-general Advocate Thabo Mokoena committing the DMRE to having a comprehensive exploration strategy ready by January.

Molloy stated that if she were in Mantashe’s position she would:

“Because exploration is so high risk, it needs to have a very high level of collaboration and transparency throughout the entire mine value chain, and this is evident in the new environmental, socioeconomic and governance (ESG) world that we live in today. That’s the expectation from shareholders and society.

“We basically have a very good understanding of where minerals are on the earth and the type of mineralisation styles that are the most economic.

“We have more minerals to find now than ever in the past and because of these factors, exploration funding is globally competitive,” Molloy stated in a video release to Mining Weekly.

JSE SHOULD BE AFRICA’S BOURSE

Latin America, the region with the largest metal endowment, attracts the most funds, which is largely investment, along with the free flowing money of exchanges such as Canada with the TSX, and Australia with the ASX.

“These stock exchanges know that if they maintain financial competitiveness in their mining investment instruments, they will profit off financial instruments where these exchange controls are absent, namely Africa, Asia Pacific/Middle East, Latin America and to some degree Europe.

“The key point here is that there is no reason why South Africa’s JSE should not be the preferred bourse for Africa, as is the case for the banking industry in South Africa.

“You can trade that capital gains tax on projects that don’t even exist in your country, if you offer the right exchange rate controls. This is how Canada attracts the largest global funding. Canada has great taxation flow-through share schemes,” she said.

“In the future, one or other African country is going to wake up and target this market in Africa and the question is why can’t this be South Africa?

“The change needs to be around the current controls to attract capital into South Africa and the benefit is the flow-throughs, the minerals exploration, mine development and creating a sustainable mining industry for future generations to benefit,” Molloy added.

Referring to work done by economic geologist Richard Schodde of MinEx Consulting of Melbourne, she said that the discovery rate had fallen in recent years on lower expenditure and higher unit cost discoveries.

The mining industry had in recent years been struggling to attract funding against other industries, and this was evident with the dividend pressure large mining companies were under.

“They are judged more by their dividend than they are by the share price increase and their capital values over time,” she pointed out.

Government management and legislation were now being compared per jurisdiction by investors.

There was now a greater focus on fiscal stability and competitivity to ensure mining funds flowed to where they were treated best.

Also on the increase were unreported discoveries by private companies. High wealth individuals and companies were choosing to go private rather than remain publicly listed and exposed to ESG requirements.

Between 1975 and the start of the 2003 mining boom was a period during which surface outcropping minerals discoveries provided enormous returns and benefits to society.

But the high expenditure on mineral exploration from 2003 to 2005 during the mining boom had not led to more discoveries and as a result, the industry was now under pressure for not delivering the same amount of success as in the past. This was because most of the very large surface mines had been discovered and were now concealed.

“We’re experiencing a step change in which data is driving mineral discoveries, particularly in geophysics, in search of concealed deposits with new traits, and also the collective data generally generated by explorers being available and ready to use to play in future programmes,” Molloy revealed.

“In Australia, the government tracks the amount of expenditure on the licences and the number of metres drilled. Each of the mining jurisdictions is managed by the State so this is collective research by the national government. Basically, $2.3-billion spent for 10 000 drill metres, which is around $230/drill metre.

“We don’t have any of this information recorded in South Africa to the see the state of health of the exploration industry.

“Since the mining boom ended in 2013, you can see that the cost of expenditure on mineral exploration and drill metres increasing at roughly about the same rate. But since 2013, with new innovations, drilling is getting cheaper over time and we are as an industry becoming more efficient at exploring and bringing the cost curve down.

“Since 2010, fewer mines are getting closed and there are also fewer operating mines. During the mining boom an enormous amount of cash was invested into the exploration sector resulting in a step change in the number of feasibility studies. We are, however, experiencing more projects not reaching development for ten to 20 years and this is due to environmental, regulatory and commodity cycle reasons,” she said.

“Africa is definitely the quickest continent to obtain mining licence approval and Orion Minerals here in South Africa managed to get through the eye of a needle and obtain their approvals in six months.

“That’s a remarkable achievement. However, having a mine footprint does assist a more efficient approval process. So, this could definitely be a drawcard for South Africa, to focus and track its mine approvals to earn a reputation of engaging in efficient processing while also maintaining its standards for environmental and community obligations.

“Looking at how a country approves its mines works with bringing those mines into production as quickly as possible because it does take ten to 20 years to commission mines from the time at which they are discovered The average delay between discovery and development is now 20 years on a global basis,” she said.

She drew attention to South Africa’s huge success between 1930 and 1950 – “an amazing performance in its time and truly remarkable and for me this really showcases how South Africa developed as a nation when you consider this alongside its diamond endowment and other minerals.

“But you can also see that between 1950 to now, not a lot of additional large significant gold discoveries have been made. The resource is also deep and this does not sit favourably for modern investors who are seeking projects with good ESG factors and comparable to other projects.

“You can see lots of surface gold deposits in the era of geochemistry from 1979 and 1990 but the world appears to be at the end of that phase of exploration on a global basis.

“When it comes to the mode of exploration method discovery, Africa is largely a geochemistry and extrapolated known mineralisation prospect discovery terrain, whereas the dominant mode of exploration is notably geophysics in Canada and Australia. More than 40% of the primary search methods used in Canada are geophysics and 33% is also geophysics in Australia, compared with Africa’s 9%. Both Canada and Australia are very successful in concealed discoveries in tier 1 and tier 2 deposits.

“We’re now in a climate in which countries need to offer readily available geophysics data for the benefit of explorers to help to derisk their exploration programmes.

“So, geophysics is now key to the exploration industry, particularly for metalliferous-type deposits, which have the largest value, particularly in polymetallics," she said.

TO FUND OR NOT TO FUND

“The question centres on whether South Africa wants to fund the discovery of its future mines itself or whether it wants to use the funds of international investors.

“Each model has different merits and advantages and disadvantages. When it comes to international exploration funds, steps have to be taken beyond the current focus of providing proper mine cadastre and geology maps," said Molloy.

“South Africa’s Minerals and Petroleum Resource Development Act is nationalistic with 26% to 30% black economic empowerment and even with exploration permits having no empowerment, getting eventual mine licence approval does require empowerment, with projects not having as much value until having obtained that approval.

“So the model for funding exploration has to be considered and how the source of funding fits within the legislation. The reality is that international investors have great choice as to where to invest, and generally do not want to dilute their ownership down during the exploration-to-mine mine phase. On the other hand, the requests of international investors are fairly standard. They ask for a 20- to 25-year mine life, they want to have 90% to 95% ownership and they want payback in three to five years.

“So, I feel in Africa it's basically a conundrum of balancing international investment and wanting the profits to stay in the continent and benefit future generations, yet we can't afford the high-risk exploration investment, where the likelihood of success is very low.

“The mining legislation needs to align the model of investment for exploration with local and international needs, and build that model themselves,” Molloy advocated.

A flow-through share scheme tax incentive, currently under consideration for South Africa, must serve to incentivise not only exploration but also public listed market development and market participation by a diversity of investors.

Many are in favour of South Africa emulating Canada's flow-through share model, which has received an initial tentative nod of official approval.

“Let’s not miss the point, the Canadian flow-through shares are liquid, listed instruments and the tax incentive must serve to incentivise exploration as well as – and ­I can't emphasise this enough – public listed market development and market participation by a diversity of investors,” reiterated Miller, who formerly led the JSE-listed coal exploration and development company Keaton Energy, and advised many mining entities in his former capacities as Nedbank CIB mining finance principal and as MD of the CCP 12J startup, which specialised in the financing of secondary and ancillary projects on existing mines.