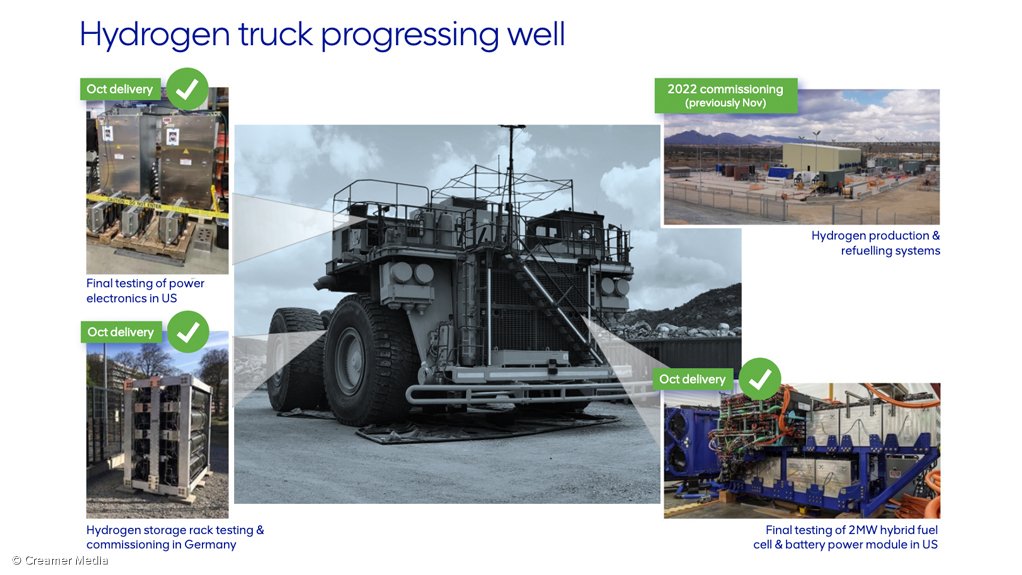 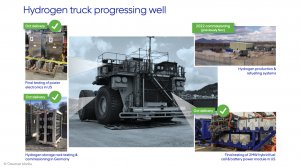 JOHANNESBURG (miningweekly.com) – Diversified mining company Anglo American, which is piloting the world’s biggest green hydrogen-powered haulage vehicle, is planning to replace its global truck fleet of 400 diesel trucks with hydrogen trucks over a ten-year period from about 2024.

Introducing hydrogen mobility on its mines will be material to its ambition of achieving carbon neutrality by 2040 as diesel represents 17% to 18% of the London- and Johannesburg-listed company’s carbon emissions. This change is expected to reduce group carbon emissions by 15%.

Anglo expects to start transitioning its truck fleet from around 2024 and complete the task over the ten years that follow, Anglo CE Mark Cutifani said during the company’s second 2021 sustainability update covered by Mining Weekly.

Cutifani had just returned from Anglo American Platinum’s Mogalakwena platinum mine in South Africa’s Limpopo province, where he took a look at the chassis and moving parts of the huge 290 t capacity hydrogen haul truck that is taking the world by storm. The truck is expected to be functioning early next year. (Also see attached image.)

“The pilot project’s progressing well,” Cutifani reported, while emphasising that the 2 MW hybrid fuel cell and battery powered unit is heading for full in-mine functionality – it will load, haul and then dump material at the crusher.

“It’s the real deal," said Cutifani, who enthused about it being at least two years ahead of competitors.

Based on what has been learnt in building this first unit, a second hydrogen haul truck pilot is already being looked at.

“We’ll finish the trials. We’ll then go on to the second phase and after that, we’d expect to start changing the truck fleets from around 2024. We’ll then look to replace our global fleet as trucks come up for lifecycle change,” said Cutifani.

That would, he said, be done at a pace of ten trucks per time, each batch including a hydrogen electrolyser to generate hydrogen to move those trucks in zero-carbon fashion, with the change being implemented progressively. Moreover, Cutifani foresees technologies and efficiencies also improving over time to create even more benefit.

“Longer term, we believe this configuration is right up there with any other configuration in terms of efficiency, unit operating costs and playing a big part in the future.

“It’s also a unit that is quite flexible," he said, referring to the hybrid hydrogen battery unit which enables stripping, the biggest part of mining cost across the operation, to be done more effectively. "That’s where we want that flexibility and for us, this change represents reduction of 15% in our carbon emissions,” Cutifani calculated.

Anglo has laudably taken a hugely promising global lead by cleverly researching and developing the hydrogen haul truck, against the background of original equipment manufacturers not being in a position to advance the absolutely necessary initiative to mitigate climate change.

However, long-term, Anglo has no ambition to be a truck manufacturer; "but we needed to set the pace of change and that’s what’s happening and that’s good news for the industry", said Cutfani

Anglo’s FutureSmart Mining technologies, which have been advanced so brilliantly by technical director Tony O'Neill and his team, are key to introducing energy use in an absolute sense, thereby increasing efficiency and reducing costs, "which also provides us with the ability to develop cleaner technologies such as hydrogen haulage – and which, in turn, is all about replacing diesel used in the operations", an upbeat Cutifani explained.