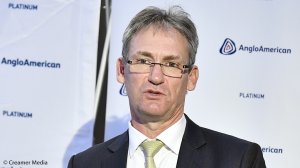 JOHANNESBURG (miningweekly.com) – The platinum industry could very easily experience an original equipment manufacturer (OEM) switching from palladium to platinum in the short term, platinum group metals (PGMs) are unlikely to be used in battery electric vehicles soon and communities are sharing considerably in the latest dividend windfall of Anglo American Platinum (Amplats).

Outgoing Anglo American Platinum CEO Chris Griffith made these points in response to questions put by Mining Weekly on the current slowness in the switch from palladium to platinum by the automotive industry, the chances of PGMs being used any time soon in battery electric vehicles (BEVs), and not only in fuel cell electric vehicles (FCEVs), and the extent to which communities will share in Amplats’ latest large dividend windfall. (Also watch attached Creamer Media video.)

A cash dividend of R11.2-billion was declared for the second half of 2019, taking the total dividend for the year to R14.2-billion.

Mining Weekly put it to Griffith that past platinum and palladium alternating took place far quicker and with seeming ease compared to the slow, undecisive manner currently.

But Griffith countered that there had always been a need to go through a process before actual substitution of one PGM for another took place.

The industry, he said, could find that tomorrow substitution had been introduced to temper prices.

In 2019, the palladium price gained 48%, setting numerous price records along the way, and the rhodium price rose 73%, while the platinum price fell 1% and the rand basket price rose by 38%. That pushed Amplats’ revenue up 33% to $100-billion. Palladium ended the year by contributing 40% to the total and platinum’s contribution fell to 29%.

“It wouldn’t be unexpected to see an OEM come out and say we have a big solution and a substitution for palladium and it’s called platinum. We know that,” he said.

But with the regulatory focus on real-world driving tests, far tighter carbon dioxide emissions and the impact of the Volkswagen emissions scandal, there was a far greater likelihood of OEMs being ultra-cautious before switching applications.

“That’s why it won’t perhaps be done as quickly as in the past. To get the right emission levels, OEMs have to spend more time coming up with the right technical solutions but don’t be surprised if you get an OEM saying it has a substitution for palladium and rhodium. In all likelihood, that substitution is going to be platinum because the fact is they're actually very, very good metals. They do the job that they’re required to do,” he said.

On the progress of the Lion Battery Technology joint venture (JV) to accelerate the development of next-generation battery technology using platinum and palladium, he said it was very early to say whether PGMs would play a role in battery electric vehicles (BEVs).

JSE-listed Amplats and TSX-listed Platinum Group Metals last year launched Lion, which subsequently entered into an agreement with Florida International University to further advance a research programme that uses platinum and palladium to unlock the potential of lithium air and lithium sulphur battery chemistries, to increase their discharge capacities and cyclability.

“But the fact is that PGMs do such amazing things in so many applications that we don’t even know where some of the solutions of the future will come from, so who says that PGMs can’t be a really cost-effective solution for batteries, and that’s why we’ve assumed that option. But if you asked us to hedge our bets, I think it would be better to expect a greater uptake in the green economy and for platinum to be associated with hydrogen fuel cells,” he said.

He said the second-half dividend allocation to communities would be R260-million, of which R157-million would go towards repaying loans and just over R100-million to the communities themselves.

“The communities are shareholders like anyone else and when we increase our dividends, the communities get their share,” he added.

Mining Weekly understands that the money will be paid as a dividend to the Lefa La Rona Trust, which benefits separate and independent community development trusts in host communities, with much of it available for development projects.

The dividend bonanza is over and above the many hundreds of millions that Amplats has spent on social and labour plan projects and corporate social investment projects.