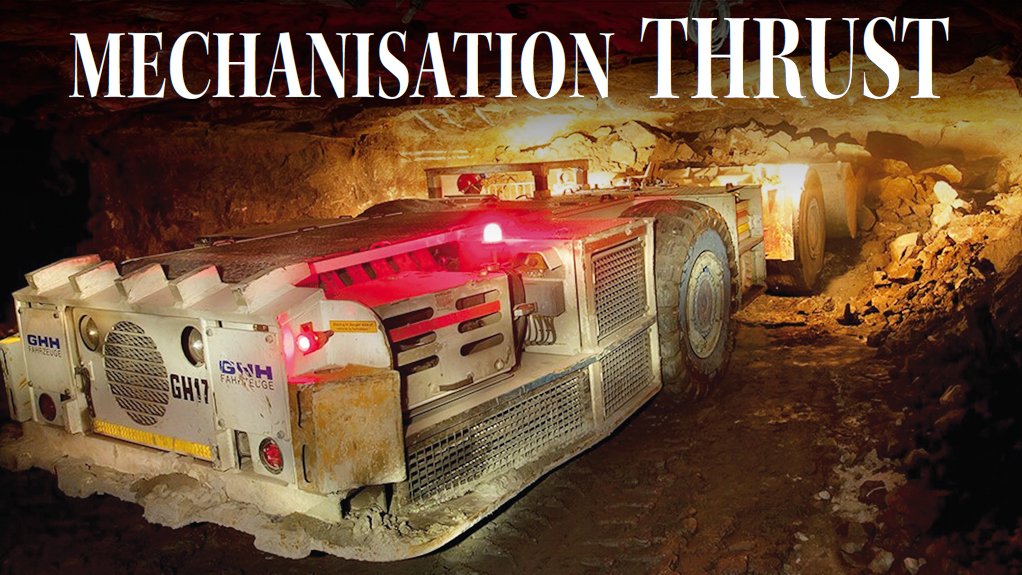 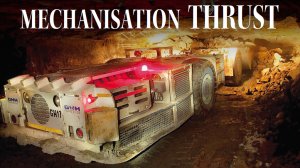 JOHANNESBURG (miningweekly.com) – Platinum producer Anglo American Platinum (Amplats) is developing a range of mechanised technologies and is aiming to produce 80% of its platinum using mechanised mining methods by 2027.

Amplats mining services head Frik Fourie says the company started implementing this strategy in 2011, when the intention was to attain this goal by 2023; however, owing to the “slump in platinum prices” over the past five years, the timeline was extended by four years. “We decided then (in 2011), as the largest platinum producer in the world, that, if we did not drive change in how the platinum industry operated, no one would.”

At Amplats’ Amandelbult mine, in Limpopo, the company is modernising its technologies with the aim of doubling the mine’s operating efficiencies.

Further, the miner is converting a portion of its Twickenham mine, in Limpopo, to be fully mechanised and is targeting completion of the transition by the end of 2017.

Fourie affirms that all future Amplats operations will be highly mechanised, with significant emphasis on remote-controlled and/or automated machines, where possible.

“Our primary focus is to remove miners from high-risk zones, as 80% of mine fatalities occur between the last line of support and the rock face,” he highlights, adding that it is of comparable significance that Amplats can considerably reduce dilution volumes by implementing more efficient mechanised mining methods and solutions at most of its operations.

At the company’s Twickenham mine’s Hackney shaft – which is under care and maintenance – Amplats’ new mining technology team is developing a new mine layout and is trialling a number of new technologies in the shaft. These include slot borers, platinum-fuel-cell-powered ultralow- profile (ULP) bulldozers, extra-low-profile (XLP) equipment and a rapid mine development system (RMDS).

He says the machine employs a standard derrick on a mobile platform and is able to drill reefs of between 90 cm and 1.5 m. “This removes the need to send mineworkers to operate in the stoping areas. The machine also features a vacuuming unit that transports the cut material from the reef to the processing plant.”

The slot borer obviates the need to establish internal supports, as all the mine’s infrastructure can be predeveloped to ensure “precision drilling”, Fourie points out, adding that the machine can be operated by one person; however, as a safety precaution, two people will be specified.

Fourie remarks that the slot borer automatically loads and recovers the cut material, while simultaneously assessing any risks related to the material before it is fed into the derrick, which lifts the material into position and then pushes the machine’s head forward.

“We have looked at the layout of our mines and ways that we can improve them. Amplats is working on a new layout design for its mines, as material vacuuming units are one of the company’s biggest constraints, as the slot borer produces significantly more volumes of material than the vacuums can handle.”

Another technology that Amplats is developing is the platinum fuel cell. The company has been trialling fuel cells on some of its ULP equipment, such as the ULP bulldozers.

The company only uses hydrogen-fuel- cell-powered ULP bulldozers, which Fourie maintains can run for two full shifts before having to be recharged. He points out that the fuel cells do not use high-pressure hydrogen tanks, making them safer for underground use.

“Quite a few of our narrow reef orebodies are 80 cm wide and it is Amplats’ aim to mine to the maximum width of the reef,” states Fourie, adding that the platinum miner has also developed mechanical sweepers with rotating steel brushes to remove debris.

Some of Amplats’ mechanised systems are already in use at its underground operations, as proof of concept of these units has been achieved.

Further, Fourie reveals that the platinum miner is exploring whether it can apply similar mobile platforms, with the addition of a backhoe loader, on the development side of its operations to use in gullies for loading shuttle car applications, such as load haul dumpers (LHDs). He explains that every panel blasted into the gully produces about 120 t of material that needs to be removed. Such an application would make the collection of these materials “significantly simpler”.

Moreover, the company has developed a remotely controlled roof bolter with two carousels that can be programmed to automatically install 21 roof bolts each at a distance of 2 m apart, with interconnections and resin bolting. Hence, the bolting technology ensures the swift and safe installation of the two lines of hanging roof bolt supports.

It was for this reason that Amplats developed its first battery-operated shuttle car. It has a 25 t load capacity and is 1.6 m high. Amplats’ medium-term plan is to establish so-called ‘eco-stopes’ where no diesel will be used, which will reduce refrigeration and ventilation costs by up to 30% on new projects.

The 23-m-long RMDS can establish a 5-m-wide by 2.9-m-high tunnel at 200 m a month. The first RMDS is already in use at Amplats’ Twickenham mine and is intended to significantly improve the time it takes to develop mines.

“If you cannot ramp up a mine within the space of five years, there is no point in developing the project to start with, as you will not be able to repay capital to investors otherwise.”

Amplats has also trialled its in-stope cutting system (I-SCS), which can mine stopes of at least 1 m high and works in conjunction with the RMDS. The I-SCS, which can be remotely navigated by a controller from the safety of a control room on the surface, develops the stope area after it has been cut by the RMDS.

These new technologies are intended to significantly increase the amount of time that stope faces can be worked. Faces are only mined for eight hours a day on average; however, Amplats aims, through the introduction of the new technologies, to extend this to 22 hours a day.

Fourie explains that Amplats will assess the effectiveness and functionality of the ULP, the XLP, the RMDS and the I-SCS, and other ranges of equipment being trialled and developed over the next 18 months. The platinum miner will then decide on the technologies it will continue to develop and those it will discontinue.