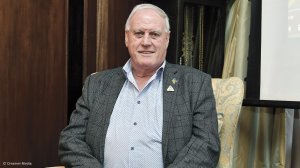 Value of Assets under Your Control: R4-billion

Number of People under Your Leadership: 400 employees and contracted project staff in various disciplines

Personal Best Achievement: The turnaround at FreeGold in 1998

Person Who Has Had the Biggest Influence on Your Career: David Rankin, former AngloCoal chairperson

Person You Would Most Like to Meet: Nobody comes to mind

Person Who Has Impressed You Most: Nelson Mandela

Philosophy of Life: Make a commitment and do your best – always

Biggest Ever Disappointment: Not having a daughter

Hope for the Future: That South Africa pulls through the extended period of political and institutional graft that has been so rampant and that, as a nation, we are able to make strides in rectifying the pressing issues facing the country

Favourite Music: I enjoy listening to most music

Dislikes: The culture of entitlement