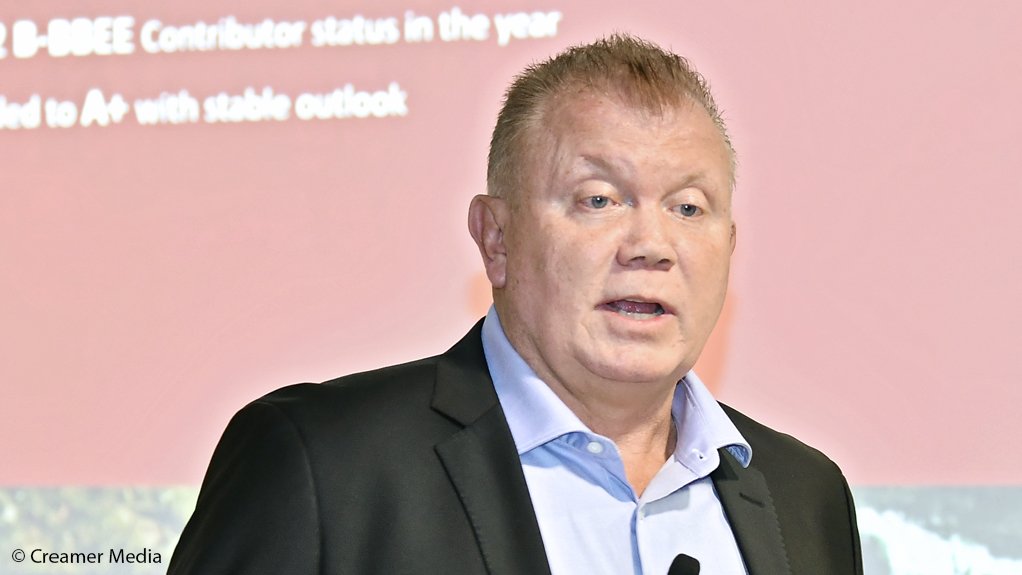 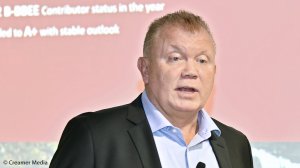 JSE-listed chemicals manufacturer AECI reported growth in all its operating segments in the year ended December 31, and managed to achieve 10% growth in its headline earnings per share (HEPS).

The company, headed up by CEO Mark Dytor, declared a total dividend of R5.70 apiece, compared with the R5.15 apiece declared in the year ended December 31, 2018.

While the company’s businesses in South Africa continued to be challenged by macroeconomic factors, power supply constraints and subdued consumer demand, foreign revenue contributed 40%, or R10-billion, to the group’s overall revenue of R24.8-billion.

AECI’s newly acquired Schirm and Much Asphalt businesses accounted for 2.5% of the 6.4% revenue increase that the company reported for 2019.

The company explained that the majority of foreign revenue was generated by the Mining Solutions operations that are active in Africa and was denominated mainly in dollars.

AECI further reported that its profit from operations was 2% higher year-on-year at R2.03-billion, compared with just under R2-billion in 2018. The company attributed the improvement to a good performance from the Mining Solutions, Water and Process and Plant and Animal Health businesses.

However, the profitability improvement was curtailed by a goodwill impairment of R147-million in the company’s Food and Beverage business during the year under review.

The company said its business realignment projects that were initiated in 2018 in the Explosives business and in Water and Process delivered to expectation in 2019.

AECI reported 30% year-on-year growth in earnings per share (EPS), to R12.23, compared with R9.38 in 2018. This was on the back of the company’s sale of its 50% shareholding in Crest Chemicals and proceeds from the sale of land in Modderfontein, Gauteng.

Neither of these transactions were included in the calculations for HEPS.

Dytor pointed out during the company's results presentation on Tuesday that AECI had continued to grow its dividend over the last five years, at an average compound annual growth rate of 10%. He added that while the company did not have a fixed dividend policy, the board looked at cash availability in a disciplined way to determine the distribution.

The company said AEL delivered a solid financial performance in a year when overall bulk explosives volumes had contracted by 0.6%.

In South Africa, bulk explosives volumes declined by a further 15.5% in 2019, following a 7% decline in 2018. AECI said sales were discontinued to Optimum Coal, which remains in business rescue, while sales to a customer in Namibia also decreased.

On the rest of the African continent, bulk explosives volumes increased by 7.7%. AECI said the strong gold price underpinned growth of the business in West Africa, with new contracts signed, while performance in Central Africa was solid owing to demand for copper remaining strong throughout the year under review.

In the last quarter of 2018, AECI Latam acquired an explosives business in Brazil for $6.3-million. The business was successfully transferred to AECI in January this year and operations will start once a final judicial process is concluded.

On the mining chemicals side, Senmin increased its export volumes by 12% in the year under review and its revenue increased by 22% year-on-year. Senmin sold higher volumes to customers in the rest of Africa, Eastern Europe and South America.

AECI confirmed that a new xanthates plant, and a pre-existing facility, was being debottlenecked to increase production volumes.

Meanwhile, the Water and Process business – under the ImproChem brand – achieved 58% growth in profits to R190-million for the year under review. This growth was aided by a customer and product rationalisation initiative, increasing the operating margin to 13.1%, compared with an operating margin of 8.7% in 2018.

The Plant and Animal Health business – under the Nulandis and Schirm brands – reported a 71% year-on-year increase in profit to R203-million, owing to a significant improvement in Nulandis' performance and a lower intangible asset write-off in respect of Schirm at R31-million in 2019, compared with R73-million in 2018. The margin achieved for this business was 4.2% in 2019, compared with a 2.7% margin in 2018.

AECI said Nulandis' performance reflected the return of a more normalised rainfall season in the Western Cape; however, the late onset of summer rainfall in the Free State still saw some farmers delay planting, particularly maize.

Although the Food and Beverage business, comprising the Lake Foods and Southern Canned Products (SCP) brands, had reported increased revenue of 17.5% year-on-year to R1.4-billion, the business reported a R46-million loss before interest, taxes, depreciation and amortisation.

AECI said the main reason for the loss was the impairment of goodwill on the SCP investment. Lower trading margins in key customers' industries diminished SCP's ability to achieve the cash flow synergies identified at the time of acquisition. Excluding the impairment, profit from the operations was R68-million.

Further, the Chemicals business, comprising Chemfit, Chemical Initiatives, Industrial Oleochemical Products, Much Asphalt and SANS Technical Fibers, reported an 8.4% year-on-year deccrease in profit to R512-million, but earnings before interest, taxes, depreciation and amortisation was about 31% higher year-on-year at R903-million.

AECI said the operating profit decline was a result of low growth in the South African economy, a depressed manufacturing sector, poor consumer demand in the retail sector, margin pressure owing to local competition and imports, and shortages of certain key raw materials.

"This portfolio remained highly cash generative. Management had initiated a project to realign the portfolio to ensure the relevance and sustainability of the business in an economic environment that was unlikely to improve in the short term.

"The costs of this strategic realignment were being finalised, as were associated internal processes. As with the other two realignment projects in the Mining Solutions and Water and Process businesses, we should recover the cash costs associated with this project in the 2020," the company stated.