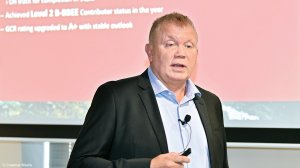 JSE-listed chemicals group AECI has declared a gross interim cash dividend of 100c apiece for the six months ended June 30, owing to its well managed cash resources and despite the negative effects of Covid-19.

The negative impact of Covid-19 on the company, in the six months under review, was about R1-billion on revenue, R454-million on profit and 294c on headline earnings per share (HEPS).

The company’s HEPS of 240c for the period under review was 34% lower year-on-year, compared with HEPS of 365c reported in the prior interim period.

The company’s profit from operations was down 32% year-on-year to R558-million.

AECI CEO Mark Dytor says that besides Covid-19-related impacts, the company’s profits were affected by R64-million in retrenchment costs associated with the restructuring of the food and beverage and chemicals segments.

Impairments of R69-million were recognised – with the company’s exit from its sauces business and the closure of Industrial Oleochemical Products’ tall oil distillation operations accounting for the majority of this amount.

However, annualised benefits of at least R100-million are expected from the restructuring.

“It was pleasing to note that in the first quarter of the year profit from operations (before taking into account any restructuring costs) had improved by more than 20% on the corresponding period in the prior year. In the second quarter, however, the effects of the pandemic on markets and performance were acute.

“The benefits of the strategic realignment projects undertaken in the prior year in the explosives and water and process businesses were in line with expectations overall, albeit that the explosives business was challenged by lower sales of initiating systems to underground mining customers as their operations were limited by lockdown owing to Covid-19,” Dytor states.

Meanwhile, the company had developed a comprehensive Covid-19 Response Plan in March, which has been updated regularly to reflect changing circumstances and requirements during the pandemic.

As it stands, 90% of the company’s 7 600 employees in 26 countries are performing their duties, either on site or at home, with 183 employees having tested positive for Covid-19. Of these, 89 have fully recovered, while the rest are being tracked.

Three of the company’s South African employees have died from the virus.

“In addition to the implementation of the AECI Covid-19 Response Plan, operational business continuity management plans have been adapted and applied in line with the company’s overall risk management framework.

“These measures have enabled continuity in operations and in the delivery of products and services to customers,” Dytor says.

During South Africa’s hard lockdown, certain AECI businesses were deemed essential, such as the supply of products and services to the coal mining sector, chemicals for the treatment of potable water, and inputs for personal care and goods industries, but effects on other sectors in which the group’s customers operate were significant.

Although most sectors resumed operations as lockdown restrictions eased, AECI says market demand remains depressed and the operating environment has yet to normalise.

Each business within AECI was tasked to estimate the impact of Covid-19 on revenue, volumes and costs as accurately as possible from March onwards. The mining solutions segment and Much Asphalt were the most seriously affected.

Conversely, the pandemic presented opportunities for ChemSystems, in the chemicals segment, and Schirm, in Germany. Both businesses entered the hand sanitiser and disinfectants markets to good effect and both are expected to continue sustaining sales in these markets for the duration of the pandemic and beyond.

AECI advises that the deferred final cash dividend of 414c declared for 2019 financial year will be paid before the end of this calendar year.

The payment date was originally set for April 6, but the company approached the Companies Tribunal for an exemption to its corporate action timetable to first conserve cash amid the peak of uncertainty during lockdown in South Africa.

AECI has invested close to R12-million internationally in socioeconomic relief initiatives that are focused on the provision of preventive gear and products in areas of need, such as South Africa’s Solidarity Fund, which received R2-million from AECI.

The company has also distributed 3 200 food parcels to date, with 3 000 more to be distributed in the next month.