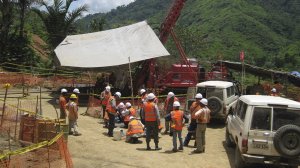 JOHANNESBURG (miningweekly.com) – Discussions with the Papua New Guinea government on the special mining lease for the Wafi-Golpu Project are to be recommenced, Harmony Gold said on Tuesday.

The resumption of the discussions comes a year after support for a memorandum of understanding (MoU), signed between the State of Papua New Guinea and the Wafi-Golpu Joint Venture on 2018, was withdrawn. (Also watch attached Creamer Media video.)

After this was signed, there was a change of Prime Minister and a court case brought against the government by the Governor of Morobe Province.

For a year now, the joint venture has been unable to negotiate on Wafi-Golpu and both parties agreed to withdraw from the MoU.

On Tuesday, however, the joint venture received notification from Papua New Guinea’s Minister for Mining that the judicial review proceeding brought by the Governor of Morobe Province had been dismissed by the National Court.

Harmony CEO Peter Steenkamp believes the joint venture is well placed to resume discussions on the basis of the progress already made on the various agreements required for completion of the project.

He believes Wafi-Golpu to be a game-changer for Harmony in term of replacing ounces and increasing margins.

“We know that the government is very keen to permit this transaction so we believe that we’re going to get some good traction going forward,” Steenkamp said at the Harmony half-year results presentation covered by Mining Weekly.

Harmony, which is leveraged to the gold price, is guiding production of 1.4-million ounces.

It has hedged 20% of its output at a high gold price.