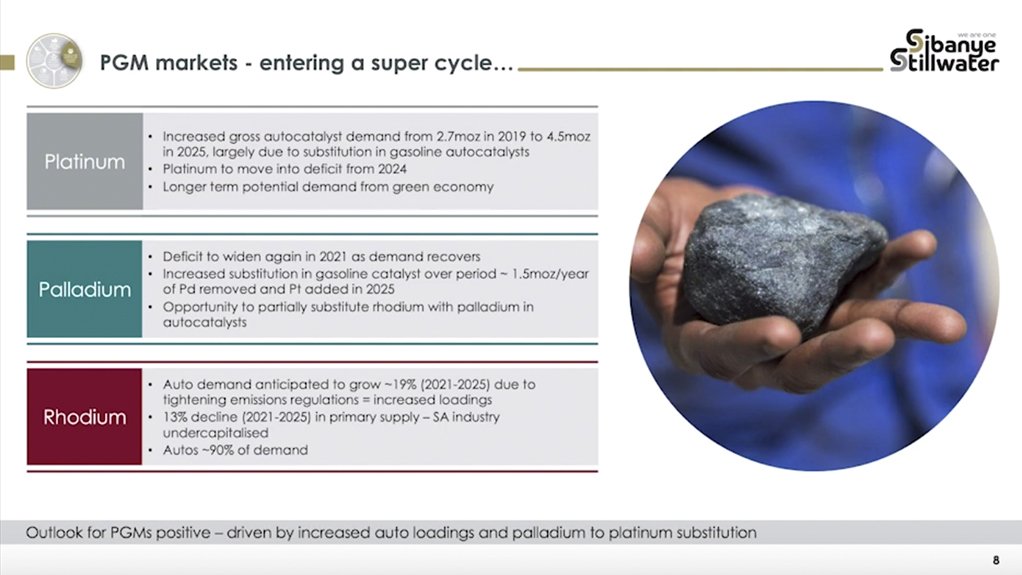 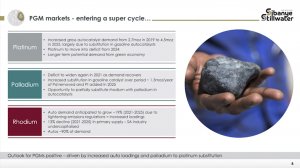 JOHANNESBURG (miningweekly.com) – Platinum group metals (PGMs) are moving into a super cycle and producers are working with end-users to prevent the metals going through a repeat of the demand-destruction phase that took place in the early 2000s, Sibanye-Stillwater CEO Neal Froneman told the BMO conference on Monday.

Speaking on a YouTube presentation covered by Mining Weekly, the head of the JSE- and ADR-listed precious and tech metals company said the three key PGMs – platinum, palladium and rhodium – had really good fundamentals that underpin them.

Displaying a slide headlined ‘PGM markets – entering a super cycle’, Froneman said the demand for platinum would increase predominantly initially through substitution of palladium in gasoline autocatalysts, which would bring the palladium market into balance, with platinum moving into a deficit from 2024.

“And, of course, the longer-term potential demand from the green economy, the hydrogen economy, really underpins platinum well into the future. So, platinum has a really good long-term future,” he said.

The palladium deficit would widen again in 2021. There would be some substitution of palladium by design.

“We have sponsored research to get palladium back into balance, and we believe that should there be any excess palladium, or should palladium move into a surplus, that would be an opportunity to address the very significant deficits that are occurring in the rhodium market,” he said.

Rhodium was, he said, really an autos metal with 90% of its demand autocatalyst-based, and with the very significantly increasing environmental requirements, rhodium would continue to be in a deficit, which explained why the price of rhodium was at an all-time high.

He recalled that in the early 2000s, rhodium and palladium peaked and then went through a demand-destruction phase, but they were not heading there again.

“As producers, we don’t want to see unstable conditions, and we are working with end-users to ensure that the combination of these PGMs is sustainable,” Froneman revealed.

HYDROGEN ECONOMY WILL BE POSITIVELY DISRUPTIVE

Froneman said the hydrogen economy would be very disruptive in a good way and identified the metals that would underpin it as platinum, iridium and ruthenium.

“We are the biggest producers of iridium and ruthenium in the world, and we’re also the biggest producers of rhodium and platinum. So, we have very significant exposure to the future hydrogen economy and that’s going to be very beneficial to all our stakeholders,” Froneman told the BMO conference, while displaying a slide showing platinum as an effective catalyst for proton exchange membrane (PEM) electrolysers and fuel cells, iridium being in hydrogen-generating PEM electrolysers with platinum, and ruthenium and platinum catalysing PEM small to large fuel cells.

Sibanye-Stillwater is itself busy with the development of a 50 MW solar photovoltaic (PV) plant for the West Wits while investigating 200 MW of additional solar PV and storage wind projects for its PGM operations in the Rustenburg area, as part of a plan to be carbon neutral by 2030.