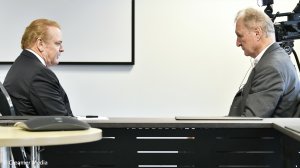 JOHANNESBURG (miningweekly.com) – The South Deep gold mine in Gauteng has an application in to self-generate 40 MW of solar power, Gold Fields CEO Nick Holland said on Thursday.

Speaking to Mining Weekly in a video interview, Holland said this could be between 20% and 25% of the average consumption of the mechanised mine near Carletonville, bearing in mind that much of it would be used during the day. (Also watch attached Creamer Media video.)

Gold Fields is looking at the options of either taking this on its own balanced sheet or having a third party do it and then provide the mine with power in terms of an offtake agreement.

“We’re looking at both options. The so-called over the fence option, where somebody else actually builds, owns and operates it, and charges us, versus us doing it ourselves.

“We’re going to look at the cost comparison over life and see what is the best result. We’ll make a call on this, I believe, in the next few months, depending on whether or not we get the approval from the Minister and from Nersa,” he said.

By this time next year, if approval is granted, the solar plant is likely to be in construction.

“Let’s assume that we get the approvals, best case, maybe the middle of the year, I think we could be in a position to start construction maybe by the end of the year, quarter four, maybe quarter three. Then it’s usually about a 12-month to 18-month build, so it’s not around the corner,” said Holland.

Gold Fields already has a 23 MW renewables plant operating at its Agnew gold mine, in the middle of the outback, 1 100 km from Perth.

“We don’t just wheel these things in and switch them on. Obviously, there are foundations that have to be prepared. But people are learning all the time so maybe the lead time will be shorter. We’ll try,” he said.

Gold Fields is building the new Salares Norte gold mine in Chile, South America. Will the company be generating its own ‘green’ power there?

“We’ll have a diesel power station to start with,” he said.

Salares Norte is about 100 km from Chile’s power grid.

“It’s very difficult for us to link up to the grid. So, to start with it will be diesel power station, which is expensive. Obviously, that’s with carbon outputs that we can do without, but then over time, we’ll look at other solutions.

“I’m sure over time, as battery technology improves, we can increase the solar from an initial 15%,” he said.

Gold Fields is taking note of the use of ‘green’ hydrogen to power trucks and will watch to see how that develops.

“In three years’ time, this world is going to be very different. Everyone is latching on to decarbonisation and clean energy, I’m glad to see. Let’s all make a difference,” he added.