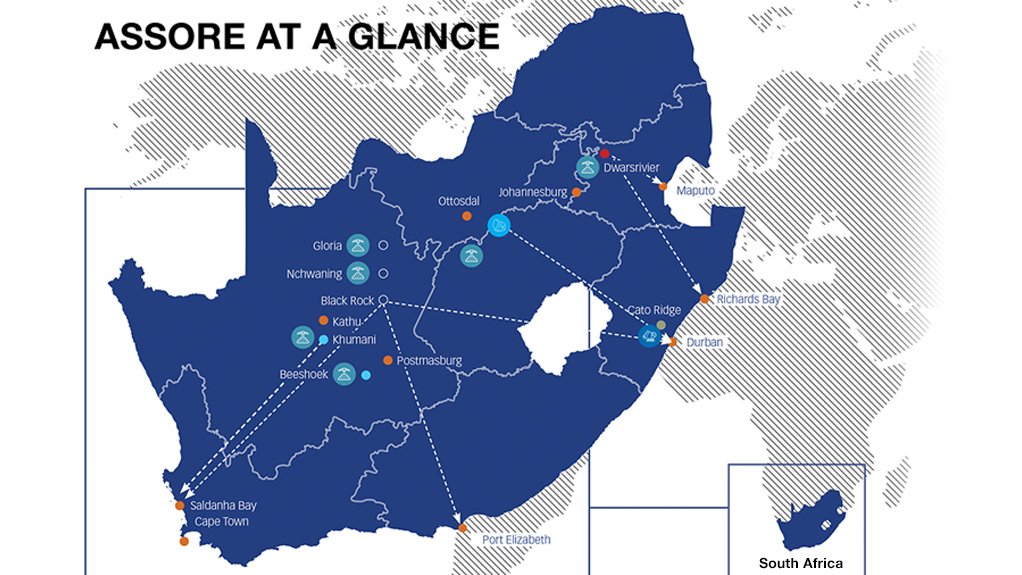 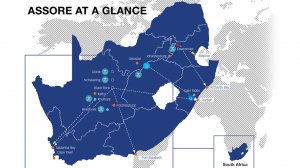 JOHANNESBURG (miningweekly.com) ­– A scoping study is under way into the self-generation of electricity for Assmang’s mines – but not its smelters, Assore CEO Charles Walters said on Friday, when the company reported interim results that were negatively affected by weaker chrome and manganese prices, and lower shipments of iron-ore in the six months to December 31.

Assmang, which Assore owns jointly with Patrice Motsepe's African Rainbow Minerals, provides three of Assore’s four commodities – iron-ore, manganese ore and manganese alloys – and Assore’s exposure to chrome ore is through its ownership of the Dwaarsrivier Chrome Mine.

Assmang’s mines are the Beeshoek and Khumani iron-ore mines and Black Rock’s Nchwaning and Gloria manganese ore mines in the hot Northern Cape, which has significant solar-power potential.

Its manganese alloys plants include the Cato Ridge Alloys smelter and Machadodorp Works in South Africa, and the Sakura Ferroalloys smelter in Malaysia.

“We’re going to look at self-generation from a mining point of view, but generating our own capacity for smelting would take significant capital. You would effectively be putting up your own power station, and based on the fundamentals of the manganese alloys business at the moment, that would be a stretch,” said Walters.

With the manganese alloys market in over supply during the period, the smelter took the opportunity to shut for maintenance after loadshedded electricity supply from Eskom became negative and disruptive.

“Allowing self-generation is a very encouraging move and we’ll certainly be looking at that for the mines. Obviously, the Northern Cape is full of sun and we’re actually in a scoping study at the moment with professional consultants at Assmang. It’s early days, but we’re under way with an exercise to consider what self-generation could be done,” he told Mining Weekly.

The chrome price came under severe pressure during the half year, when its performance was 91% down. “The chrome price is now at a break-even-type situation,” said Walters.

Manganese ore also fell considerably during the six-month period, but off a base higher than the low base from which manganese alloy prices fell.

“We really took strain in our alloys business,” said Walters. Post the reporting period, the price of manganese ore bounced back 20% and then remained flat, but growing manganese ore stocks in Chinese ports are rekindling price concerns.

Counter to that, the iron-ore price held up reasonably well in the six months, rising to more than $100/t in July, falling to $80/t in August, and then rising closer to its current position in the $90/t range.

On the outbreak of coronavirus and the potential impact of that on iron-ore continuing to hold up, Walters told Mining Weekly: “We’re concerned about the disruption that we’re seeing to supply chains in general. It seems there’s not much of a problem in getting ore into the mills, but the mills seem to be starting to struggle to get finished product out. That pipeline choke up could have an impact right up the value chain, so we’re watching the situation very carefully.”

On the benefit of the high quality of South African iron-ore, he said: “South African iron-ore quality is very good and perhaps superior to the majors of Brazil and Australia, so we do, as South Africa, get a bit of a shield in terms of us possibly being the last ore that the market stops buying, but we'll always be pushed, from a price point of view, to where the spot market is trading.”

“It’s now just a question of delivering. You’ll see that Black Rock's manganese ore volumes were up quite nicely in the reporting period. They’re improving on the back of the capital that’s been spent over a good many years now,” said Walters.

“The Gloria project is going very well. When done, we would have spent roughly R10-billion in nominal terms and that will give us the capacity to move up to five-million tonnes, but at this stage, we’re targeting to export only four-million tonnes. Had we not gone ahead with these projects, our cost position would have been severely diluted.”

On whether the capital expenditure (capex) was expansionary or sustaining, Walters said: “It’s been sustaining capex as much as it’s been growth capex. Obviously, you push the growth in tonnage to pay for the capex, so it’s roughly half replacement and half expansion, if I have to give it a guess.

“We haven’t spent huge time trying to define the difference between what is replacement and what is growth. We’re just focusing on getting the money spent efficiently and making sure that it delivers the right tonnes and the right mix of grade, at the right time,” Walters said.

On cost containment, he said: “Black Rock is beginning to show well contained unit costs, helped by increased volume. Costs at Dwarsrivier were up 6% year-on-year on volume that was lowered by mining challenges and market circumstances. It was good timing for us to pull back at Dwarsrivier, but it did have an impact on the cost per tonne.”

Capex in Assmang was at similar levels to the previous period, amounting to R2.1-billion. The iron-ore division spent R0.9-billion on mostly waste stripping and replacement. Expenditure in the manganese division was R1.2-billion, with R335-million going to Black Rock and R443-million to modernisation.

On rail logistics, he said: “The company’s iron-ore volumes disappointed but we still believe that it’s a timing issue. We still believe we’ll get to our 14-million tonnes iron-ore exports for the full financial year.

“The first-half volumes were down a bit, in the six-million tonnes range, which meant that we did not show profits commensurate with the stock we had produced in this period. But we should catch that up.

“The line is going okay, but its constrained. Ourselves and Kumba Iron Ore and some of the manganese players consume the line’s full capacity. Any little hiccup with a derailment or a problem at Saldanha and some are likely to lose a vessel somewhere along the line. It’s tight but we work very closely with them.”

On the way forward, he said: “This is a very steady ship. We’ve got cash in the bank. We’ve always been conservative. We want to keep delivering the best results we can in the economic circumstances that prevail and you can expect more of that from us going forward.”

Assore said through the Stock Exchange News Service (SENS) that world economic growth in 2019 was hampered by the US/China trade war and the growth forecasts for 2020 were that the gross domestic products of the major economies would slow.

The SENS notice added that growth in steel production was expected to slow in line with global growth. The extent of the impact on global commodity markets of the recent outbreak of the coronavirus in China, and its spread around the world, remained unknown at this stage.

When considered together with unresolved trade issues in several regions of the world, the outlook had become more negative, with the balance of risks pointing to the downside.

“On the other hand, a potential investment stimulus response from China would help to offset the current weakness in the commodity markets. In addition, Chinese environmental policies are expected to continue to have a positive impact on the demand for high-quality iron-ore and manganese ore. This will support the demand for the group's high quality products,” the SENS notice said.

“The potential increase in the supply of iron-ore is likely to introduce some weakness in iron-ore price levels. On the other hand, an improvement in manganese ore prices is anticipated, with Chinese demand recovering and improved demand expected from outside of China.

“The surplus in supply of stainless steel, ferrochrome and chrome ore is predicted to persist. As a result, limited potential exists for major price improvements for these commodities which will continue to suppress the financial performance in this segment,” it added.

Assore consistently pays out 50% of earnings and its latest interim dividend is in line with that.

“Unfortunately, the earnings are down 29%, so our dividend is down from R10 per share to R7 per share," said Walters.

Headline earnings for the half-year decreased to R2.1-billion, compared with R2.9-billion for the previous corresponding period.

The rest of the group’s operations reported headline earnings that were 68% lower than the previous period, at R0.2-billion, to which Dwarsrivier contributed a profit of R31-million.

Net cash was R900-million down on the R9-billion at the end of June.