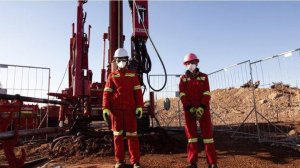 The mining industry has traditionally been a male-dominated environment. Nowhere is this more evident than in exploration drilling, where handling the drill rods alone requires substantial physical strength and dexterity, in addition to being able to load and unload heavy equipment from the drill rigs itself. However, when drilling technology solutions provider Rosond of Midrand designed and developed a next-generation drill rig that automates this arduous and dangerous process, an opportunity arose for several women to be deployed at Kumba Iron Ore in the Northern Cape. Recruiting and training this team formed part of the company’s tender with Anglo American, explains Rosond MD Ricardo Ribeiro.

“What I enjoy most about my job is that we always work as a team. This truly creates a family environment where everybody is there for each other. I feel empowered, because for many years only men were allowed to work in the mining industry. I would like to thank Rosond for giving me such a big opportunity. I know I still have much to learn, which is why I am so excited about this job and being part of women in mining,” says Bolokang Innocentiah Mere, who lives in Kathu. Her role as a Grade Control Drill Assistant is to ensure that all samples taken are labelled correctly, and to assist with set-up when relocating to the next exploration site.

Drill Assistant Lesogo Mavis Kanon, who works at Kuruman, agrees that women like herself are paving the way for increased gender equality in the mining industry. “What I enjoy most about my job is acquiring the knowledge to overcome the challenges I face on a daily basis. Rosond has taught me that people should not be judged on gender alone, but on skills and competency. I am blessed to be in my current position, as this opportunity has shown me that anything is possible, and that we can indeed bring about a positive change to the industry.”

Reabetswe Prudence Kaekae comments that her position as Drill Assistant has allowed her to not only operate the machinery itself, but also to think out-of-the-box and be more multitasked. “It is quite challenging yet interesting at the same time. It is a different working environment that you become used to as time goes by.” Her vision is to learn more about the mining industry so she can become an instructor herself one day, teaching the next generation of women about the latest drill rig technology being developed by Rosond.

Diamond Drill Assistant Agness Sethunya has a wide range of tasks, from washing core samples to general paperwork. “I enjoy learning new things each and every single day, but mostly I enjoy the challenges I have to tackle as a woman working with drill rigs and other heavy equipment.” Her future plan is to become a Safety Officer and ultimately a qualified engineer.

Mercia Monwe is an assistant on the Ros 8II EX drill rig, and says she enjoys learning from her fellow drill crew members, who are highly mindful of safety and efficiency while on the job. “At first it was a challenge, but at the end of the day I learned that even working in a male-dominated industry, I can achieve anything.”

Being able to work in the mining industry is an incredible achievement, says Drill Assistant Palesa Cheraldine Buneditte, adding that she now has access to opportunities for personal and career growth that were simply unavailable to her before. Even Letlhogonolo Moricho, who works as a cleaner at Kolomela, has been inspired by what her fellow female colleagues have achieved. “I am very excited to be a part of the mining industry, which has put me on a path to learn more and one day maybe even get to work on the drill rigs themselves.”

Rosond has supplied 28 next-generation drill rigs to the Kolomela and Sishen mines as part of a R2 billion, five-year tender to ensure Anglo American is up to date with the latest drilling technology as it modernises its geoscience operations. The drill rigs feature increased safety due to the fact that they are largely automated, and include control cabins with air-conditioning and ablution facilities attached.