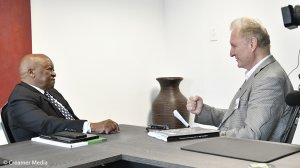 JOHANNESBURG (miningweekly.com) – A study being undertaken by platinum group metals (PGM) mining company Royal Bafokeng Platinum (RBPlat) into the generation of renewable energy in general and solar power in particular is at a very advanced stage.

“We should have the results in the second half of this year, if not earlier,” RBPlat CEO Steve Phiri tells Mining Weekly. (Also watch attached Creamer Media video.)

The head of the black-controlled JSE-listed PGMs company envisages the self-generation of renewables being done competitively in partnership with a private-sector company for the purpose of ensuring energy reliability and greater environmental protection, with the capital expenditure (capex) required not borne by RBPlat itself.

During Eskom’s stage 6 load-shedding last year, all primary use of electricity had to be stopped at its BRPM and new Styldrift PGM mines in North West province, which meant its workforce could not go underground.

With the mechanised Styldrift ramping up to steady state, RBPlat is destined to becoming a 550 000 oz/y to 600 000 oz/y producer of four element (4E) platinum, palladium, rhodium and gold metals.

Though RBPlats is beginning to hear the take-off roar of its mechanised Styldrift mine’s high-stope engines, it is also discovering that the skills required for mechanised mining are scarce in South Africa, where conventional low-stope drill-and-blast mining has predominated.

“You don’t go along to Checkers and Pick n Pay to buy those skills, and they are very mobile. They move from one mine to the other because they are in demand,” said Phiri.

Styldrift has created employment for close to 3 000 people, excluding project contract personnel, which number another 1 000.

While providing housing for employees to own does put a strain on cash flow, the benefits far outweigh the cost.

Palladium and rhodium, the PGM metals of the moment, are more prevalent in the upper group two (UG2) reef than in Merensky reef, where platinum is the high flyer.

Because of the strong demand for palladium and rhodium, new emphasis on mining UG2 is reflected in RBPlat's recommencement of UG2 mining at BRPM’s South shaft, which is migrating very rapidly from Merensky to UG2. In a year’s time, South shaft will be a UG2 mine.

The higher-grade UG2 at North shaft is already being mined to ensure that higher quantities of what have become scarce commodities are being delivered into the market to the benefit of RBPlat’s basket price.

If the prices of palladium and rhodium continue at these heady heights, and some calculate that they could go even higher, Phiri is adamant that there will be no alternative than for the automotive industry to substitute platinum for palladium.

Palladium is currently the preferred PGM for petroleum-fuelled vehicles in especially Europe, where diesel dominance has been lost.

“Platinum may not substitute palladium 100%, but we see a percentage of platinum coming into petroleum autocats quite soon,” said Phiri.

Meanwhile, fuel cell electric vehicle (FCEV) technology, which is platinum rich, is gaining traction, particularly when it comes to buses, trucks, trains and ships. FCEVs can refuel in a matter of minutes and give consumers a longer range. If hydrogen refuelling infrastructure continues to grow and FCEVs scale up, FCEVs could well begin to compete more visibly in the zero-emission space.

“If you go to China, you see a lot of them,” said Phiri, who described as “amazing” the take up of FCEV buses and trucks in Shanghai, for instance.

His visit to California also showed a repeat of Shanghai’s large number of FCEV buses and trucks.

More should be done in South Africa, said Phiri, to support the emergence of FCEVs against the backdrop of the reiterated positive sentiment of the South African government towards FCEV development.

“We’re in a third-world country where things take a little bit longer to take effect, but the intention is certainly there,” said Phiri.

RBPlat’s 4E basket price is expected to remain at positive levels. Its degeared balance sheet has been optimised. The momentum of Styldrift towards steady state is on track and should eventuate in higher production volumes at lower cost. Together with the consistent performance of BRPM, higher revenue and a greater generation of free cash flow should follow. All this has opened the way for the prospect of annual dividends.

“We’ve always said that once Styldrift has ramped up to steady state, we’ll definitely pay dividends,” Phiri confirmed, which dovetails with the RBPlat board approving a policy of distributing a minimum of 10% of free cash before growth capital.

The board has stated that this will be done through the anticipated declaration of a dividend each year and consideration also being given to the return of excess cash to shareholders by way of special dividends.