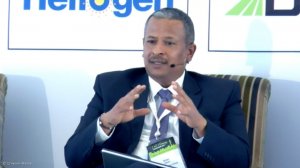 “I think he’s got it right,” was Dames's summing up of the President's energy initiative during a discussion at the Coal & Energy Transition Day, covered by Mining Weekly. (Also watch attached Creamer Media video.)

In response to the event’s chairperson and mining stalwart Bernard Swanepoel, Dames spoke of achieving optimal performance out of existing capacity and adding new supplementary capacity as being the way to go.

“You have to get Eskom working better, and it’s doable, it’s possible, and you have to add more capacity,” said Dames in highlighting renewable energy as the additional capacity of choice.

On green hydrogen, Dames spoke of high energy density being among hydrogen’s “unique advantages”. Storable for short and long periods, he highlighted hydrogen as being a secondary fuel and green hydrogen being produced using renewable energy.

“Hydrogen is very attractive from the sense of the energy density. Small amounts can produce quite a lot,” said Dames, who added that green hydrogen’s high cost of production and logistics would, however, need to be carefully looked into.

On renewable energy, he forecast that "the world will revolve around renewables, and hence in South Africa we’ll need lots and lots of it.”

African Rainbow Energy and Power’s holding company is described as being the only African company that is a partner to Breakthrough Energy Ventures, which was started by Bill Gates and which includes several global personalities such as Jeff Bezos, Richard Branson, Jack Ma, Mukesh Ambani and others. The goal of Breakthrough Energy Ventures is to use technology and innovation to provide clean energy that does not contribute to climate change and the ventures company is developing long-duration storage batteries that can store green energy for eight to ten hours.

Expanding on electricity storage, Dames also singled out pumped storage schemes as long-duration energy storage schemes that can be used to dovetail with the variability of renewable power to ensure constant power availability.

A pumped storage scheme is a type of hydroelectric energy storage scheme with a configuration of two water reservoirs at different elevations that can generate power as water moves down from one to the other reservoir, passing through a turbine.

As reported by Engineering News & Mining Weekly earlier this year, a call has been made for the proposed but delayed 1 500 MW Tubatse pumped storage scheme, near Roossenekal, in Mpumalanga, to go ahead as an independent power producer (IPP) project, or as a public-private partnership (PPP), to provide more electricity storage capacity potential in South Africa.

Ingula, Drakensberg, and Palmiet are owned and operated by Eskom, Steenbras by the City of Cape Town, and Tubatse would likely be the first IPP or PPP should a decision be taken to go ahead with it.

African Rainbow Energy, which invests in renewable technologies including solar, wind, and battery energy storage solutions, has already secured a deep investment pipeline and has partnered on a number of bids in Window 5 of South Africa’s Renewable Energy Independent Power Producer Procurement Programme, or REIPPPP.

African Rainbow Energy is financially closing a pipeline of 2 100 MW of renewable projects, and “many other exciting things that we're thinking through”, said Dames, who let it be known that the potential exists for the creation of large-scale clean-energy alternatives for South Africa and Africa, with some of these under consideration by his group.

He spoke of a portfolio of 2 100 MW being 30% private-sector owned. “Since we’ve invested in a company that works in that space, they’ve gone from doing the first 10 MW wheeling project for Amazon, to closing two 100 MW projects for a large mining company – and we’re going to do another 100 MW for a mining company,” Dames disclosed in his conversation with Swanepoel.

Also noteworthy is that African Rainbow Energy and Power has a 40% stake in the SOLA Group, a vertically-integrated provider of renewable energy solutions, which is aiming to transform Africa through clean energy.

The 5 000-MW-in-three-years challenge set by South Africa’s National Planning Commission provides the critical mass for the creation of a new local energy storage industry that will have the potential to export into the growing global market for energy storage solutions, Bushveld Minerals CEO Fortune Mojapelo stated in an interview with Mining Weekly last month.

Long-duration batteries support the integration of renewable energy into electricity grids and Mojapelo sees upcoming energy storage demand as providing a generational opportunity that South Africa should not miss.

On energy storage being the flexible renewable energy enabler, he notes that sun shines at its brightest during off-peak periods “and, ideally, you want to be storing that energy and using it during peak periods when you're running those diesel generators, which are quite expensive".

“Similarly, if you look at wind generation, its peak generation capacity is during off-peak windows from a demand perspective. Pair that with long-duration energy storage, and you can deploy this power flexibly into the time zones when you need it the most.

“Overall, by doing that, you're improving the efficiency of the grid and enhancing the contribution of renewable energy to the grid,” Mojapelo points out.

To meet emerging demand, Bushveld has positioned itself for broad-based involvement through its far-reaching vertical integration model, with its downstream business including the construction of an electrolyte manufacturing plant in East London, the development of a hybrid minigrid at its Vametco vanadium processing plant in Brits, and investment into vanadium redox flow battery (VRFB) manufacture. The company also has the primary vanadium-processing Vanchem facility in Mpumalanga.

The minigrid project, which will serve as a renewable energy-powered VRFB reference site, will use locally mined and locally beneficiated vanadium, demonstrating how vanadium battery energy solutions can provide more local value for South Africa than any other storage technology and thus underpin a just energy transition in South Africa.