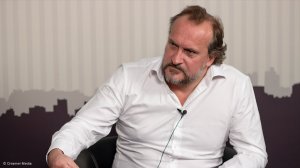 JOHANNESBURG (miningweekly.com) – A plea for the government to awaken to the massive real potential of the South African mining sector was made on Wednesday by Eunomix CEO Claude Baissac, who decried the disincentivising of South African mining over the past 20 years as an inexplicable paradox and a massive mineral policy mistake.

“Every major change in policy reduced the performance of the industry all along the economic value chain, from investment to returns, job creation and production,” Baissac said.

While there were now encouraging signs of a policy turnaround, what was still lacking in his view is a frank conversation about what has caused the decline and how that can be rectified.

He urged the government to view the mining sector holistically to maximise the returns for all the South African people.

“The economy of mining is a complex one. Too little mining is the waste of an opportunity. Too much of mining also brings risks, like Dutch disease and the resource curse, which are real,” he said.

Mining countries that relied too heavily on mining had generally failed to be successfully developed, whereas South Africa continued to be one of the few jurisdictions, along with Chile, Canada and Australia, where mining plays an integral role in economic development.

Mining should not represent more than 15% to 20% of the gross domestic product (GDP) of any economy, to avoid the over-strengthening of the currency during high commodity price cycles and the rendering of the rest of the economy less competitive – “the infamous Dutch disease”.

“But right now, the South African mining sector is 4% of GDP, which is ridiculously low and far below its potential. If we doubled it, it would probably generate 200 000 to 300 000 more jobs very rapidly. We’re not talking about making mining 30% of the economy. We’re talking about making it 8% to 10% of the economy, which is achievable over the next five years, and it will bring with it a lot of economic benefits, firstly in jobs, secondly through exports and thirdly tax revenues for a government that is fiscally broke,” he said.

He cautioned that the government’s lofty policy goals on mineral beneficiation needed to be attuned to the economic realities of South Africa, where the price of electricity, the cost of labour and the lack of skills had rendered beneficiation uneconomic across a broad front.

“I’m not convinced that we’re having those tough conversations. I think we’re still playing politics and we’re still trying to please one another,” Baissac said.

There was no doubt that policy had played a role in killing off exploration at a time when exploration funding in competitive mining jurisdictions was profuse.

On reports of the curtains coming down on deep-level precious-metals mining, he questioned whether South Africa was really running out of gold in the ground and suggested that the country was rather running out of the capacity to extract gold safely and economically.

“We have lots of metals and minerals that are not being explored and mined efficaciously,” he said.

He called for a meaningful conversation and consensus on the huge boost that mining could give to the economy of South Africa and urged the country to set reasonable targets collectively to obtain the best for all the people of South Africa from this country’s extraordinarily rich mineral endowment.