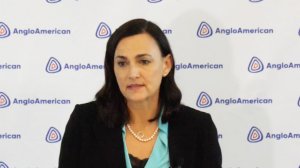 Speaking to Mining Weekly in a Zoom interview, Viljoen highlighted how PGMs are poised to play a role, no matter the direction in which the energy transition heads. (Also watch attached Creamer Media video.)

Seventy per cent of Amplats’ production already helps to stop internal combustion engines from polluting the world’s air, and running in close parallel is the growing use of PGMs to catalyse the generation of green hydrogen, and convert renewables-based green hydrogen fuel cell electric vehicles into the world’s cleanest and greenest mobility.

Now, the unique properties of PGMs are also poised to play a key energy density enhancing role in batteries, and thus battery electric vehicles, as a result of work being done since 2019 by Platinum Group Metals and Amplats with Lion Battery Technologies.

“What's really exciting for us going forward is if we think about the energy transition to renewables, one of the challenges with renewables, as we know, is that wind and sun is not necessarily stable, and we need ways of storing energy to have it available when we don't have sun and wind,” said Viljoen.

Key is that hydrogen is, in effect, stored energy in and of itself, and going hand-in-hand with it are PGMs, making the metals role players in storage as well, in that they catalyse the generation of hydrogen, which can be stored, and in fuel cells, they catalyse mobility and power generation, coupled to unrivalled cleanness and greenness

They are now poised to also uplift the energy density of lithium sulphur batteries, lithium air batteries, and lithium-ion batteries.

“So, the exciting thing about our product is it doesn't matter how this energy transition goes, we will have a role to play,” said Viljoen.

In a world that has no option but to clean up its act, it is clear that PGMs are within a hair’s breadth of becoming ubiquitous process catalysers.

Regarding the energy density PGMs can provide, some original equipment manufacturers (OEMs) of cars favour the higher density the metals can provide and Lion can add 30% more range, or for the same range and power, 30% less battery, which offers more space and less weight. As reported by Mining Weekly, this is what some OEMs are after, and a solution that PGM producers are poised to bring to the market with Lion Battery.

Amplats' commitment to market development is underscored by its relationship with venture capital company AP Ventures, which is a potential investor in PGMs-linked battery technology.

Amplats more than doubled its earnings before interest, taxes, depreciation and amortisation (Ebitda) to R108-billion in 2021, and contributed an important R148-billion to all its stakeholders within the hard-pressed South African economy, prompting this opening question during a one-on-one interview:

Mining Weekly: The record results of Amplats show a contribution to society of an enormous R148-billion. Please highlight the details of this distribution of value to your stakeholders, particularly to the fiscus during these tough times of social grants?

Viljoen: I think that's a very good opening question for us to talk about  – the real value that we do generate as a mining company. To your point, we have contributed R148-billion in the South African economy. If you break that down, R35-billion of that made up the taxes and royalties that went back into the fiscus. We spent R14-billion on salaries and wages, R28-billion on local procurement, of which R5-billion was doorstep community spend. We spent a further R2-billion on social investment, such as Covid support, and then – which I think is very important and something we often miss – we spent a further R14-billion on making sure that we can sustain the assets that we have, regrow them for the sustainability of the business, and to continue the contribution back into broader society.

The R80-billion dividend declaration equates to paying out every single cent of the headline earnings. Is that a first?

It is the first full year in which we've paid 100% of headline earnings. I think it's important for us to notice that we have been saying that part of our capital discipline, that we will make sure that our shareholders share in the benefits that we do create with a baseline 40% dividend, and within the framework of the work that we have to do and the future outlook of our markets, we felt it best to give the money back to our shareholders, I think it's important to notice that it is the first really big payout to our shareholders in a number of years. So, whilst all of the other contributions to the South African sector continue, our shareholders do not often see this kind of payout.

Why is it particularly important to be a leader in the field of environmental, social and governance matters, ESG matters?

It goes to the heart of our purpose of re-imagining mining to improve people's lives. It goes to the core of our value system and who we are in mining. That’s why we want to be a leader in ESG. Over and above that, I think more and more it’s becoming a prerequisite for us to do business. It's a prerequisite from our employees, from our social stakeholders, from governments, from our shareholders, that unless we can show that we are responsible, that we shouldn't be doing the work that we're doing. That is at the heart of driving, reimagining mining to improve people's lives.

And then the platinum group metals, or PGMs, that you produce mitigate against climate change right now, as we speak today, and what do you see ahead that will ensure that PGMS are used even more intensely to preserve what Mother Nature has given us?

As you rightly say, 70% of our product goes into the exhaust systems of internal combustion engines to clean the air. What's really exciting for us going forward is if we think about the energy transition to renewables, one of the challenges with renewables as we know, wind and sun is not necessarily stable, and we need ways of storing energy to have it available when we don't have sun and wind. In the world of PGMs, hydrogen plays a very big role both in the generation of hydrogen, the storage, the transport and in fuel cells. Our product plays an important role in catalysing all of those processes. I think the other thing that's really interesting is how the unique properties of our product also could play a role in batteries, where we are doing very interesting work with our partner Lion Battery Technologies with the application of specifically palladium and iridium in lithium air and lithium sulphur batteries. So, the role that our product plays, specifically palladium in lithium sulphur and lithium air batteries, and also the application in lithium-ion batteries, to increase the energy density in these batteries. So the exciting thing about our product is it doesn't matter how this energy transition goes, we will have a role to play. The uncertainty of the future is exactly how that will transpire.

How close are your operations to benchmark, or to what you call P101, and what key operational innovations do you see going forward?

We refer to P101 performance, with P100 being the best possible, and we are wanting to do better than that with P101 performance. We’re making progress and we’re continuously on a learning journey. We've identified the areas in the business where we see the biggest impact, and we've driven towards benchmark performance in those areas for starters – and this is perhaps a good time to talk about our Anglo Converter Plant (ACP), which has impacted our performance over the last couple of years quite tremendously. The reliability of the ACP asset was definitely not at benchmark level, and not where it needed to be, which caused quite a bit of disruption for us in 2020. The counter is that we’ve applied P101 principles as we've rebuilt the ACP. The furnace has not been operated beyond design capacity. We’ve really run it in a very stable way, and put a large number of ounces into the market at a time when the prices were really good.

What steps are planned to slash Scope 1 and 2 emissions – and what are your plans for the more vexing Scope 3 emissions?

Well, you know they say that charity begins at home, so when we talk Scope 1 and 2 we obviously need to look at ourselves in terms of renewables and how we use hydrogen. We do have a national strategy that we've developed within the group, which looks at photovoltaics, wind and also at hydro pumping to both generate renewables and store. We are now developing our own hydrogen to be able to use hydrogen in greenhouse gases generated from diesel. To that extent, there are a couple of steps. We've started to build our own 100 MW photovoltaic plant at Mogalakwena operations and that has the potential and certainly the plan is to expand that to 320 MW. In addition to that, we will use that to generate our own hydrogen for use in a fuel cell application in a 300 t haul truck at Mogalakwena. That we will expand across a wider portfolio of work to reduce our Scope 1 and 2 emissions. Scope 3 emission reduction is a piece of work that is underway to work with both upstream and downstream and we have built that ESG requirement from both procurement and capital allocation points of view, to drive those inputs and then downstream applications or implications for Scope 3.

Our plan in looking at renewables is to include all of our assets and the hydrogen as an option to store. In our smelting operations, it's slightly different to smelting other ores such as iron-ore, for instance, in steelmaking. We don't use coal in the same way, so our processes are slightly different. But in terms of being a form of storage, on the back of renewable energies, that could certainly be something we will look at using.

Looking overall, what's the biggest message that you would like readers, listeners and viewers to take away with them?

I think, Martin, it is the value of collaboration, and the understanding that we have a number of stakeholders and shareholders that work together for us to ultimately extract the value from the orebody. The orebody we mine does not belong to us. It belongs to the people of this country. The money we work with doesn't belong to us, it belongs to our shareholders. What we as a team bring to the party is we know how to mine, we know how to extract metals, add the value out of our orebody, and when these three come together, in good collaboration, we can really create value for all of our stakeholders.