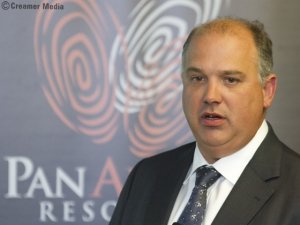 JOHANNESBURG (miningweekly.com) – As precious metals miner Pan African Resources wrapped up its latest acquisition, the Evander operations from gold miner Harmony, the JSE- and Aim-listed company plans to shift its focus to developing its portfolio of operations.

CEO Jan Nelson said on Tuesday that Pan African would not pursue further acquisitions after it received the Mineral and Petroleum Resources Development Act Section 11 approval from the Department of Mineral Resources (DMR) to buy the Evander operation, in Mpumalanga.

The group, which had met all the requisite conditions for the R1.5-billion Evander deal, expected DMR approval within the next four weeks, after which it would continue the operation’s 6- to 12-month integration into the group.

Following Pan African’s successful R703-million rights offer and a new R600-million revolving credit facility from two banking firms in January, the company was able to “comfortably” acquire the mine.

Nelson had, on several occasions, referred to the acquisition as game-changing for Pan African, which aimed to double the operation’s gold production to 200 000 oz in the next full financial year.

Evander, with an anticipated life-of-mine of more than ten years, had an expected yearly gold production profile of about 100 000 oz.

Pan African currently owned the Barberton gold mining operations (BGMO), in Mpumalanga, which comprised three mines with a total output of 95 000 oz/y, as well as the near-term Phoenix platinum project, in the North West province, with a yearly platinum-group element (PGE) output of 12 000 oz.

He commented that he was encouraged by the progress made at BGMO, particularly with the development of the tailings retreatment project, which was expected to boost yearly gold production by 20 000 oz by mid-year.

The 100 t/h, or 1.2-million-ton-a-year plant, which was a larger-scale version of Phoenix’s 30 t/h chrome tailings retreatment plant, was expected to be commissioned on June 30 – on time and within budget.

Pan African reported that the Phoenix tailings retreatment plant had, during the six months to December 2012, sold its first 3 136 oz of PGEs – lower than initially forecast, owing to a reduction in head grade and recoveries.

Over the next seven months, the company aimed to expedite the construction of an additional tailings storage facility allowing Phoenix to bypass oxidised tailings. At the moment, recovery and concentrate was negatively impacted.

The Evander tailings retreatment plant was currently under discussion and the group would aim to build on the infrastructure that was already in place at the mine.