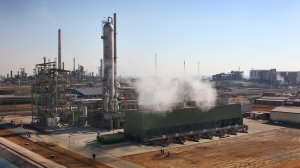 Diversified chemicals group Omnia had a strong performance in the 2021 financial year, enabling it to resume dividends and return over R1-billion to shareholders, despite the impact of the Covid-19 pandemic and general economic and sector challenges.

Referring to the company’s financial struggles in 2019, Omnia group FD Stephan Serfontein on June 22 told Engineering News that the resumption of dividends demonstrated the group’s “resilient performance in generating cash, to doing the turnaround in the business, focus on manufacturing excellence, supply chain optimization and reducing operating leverage in the business”.

This, in turn, generated cash which allowed Omnia to settle its debt, which Serfontein noted was a “strong message” in being able to return dividends to shareholders.

“To be in a position where you actually sit on cash and where you are able to distribute dividends to shareholders, that’s something that we’re really proud of and it put Omnia in a really strong position going forward,” he commented.

Throughout the pandemic, JSE-listed Omnia continued its delivery of essential services, including primary chemicals and solutions for the agriculture, mining, manufacturing and fuel sectors, which play an essential role in food security, economic stability and the livelihoods of people globally.

CEO Seelan Gobalsamy on June 22 said the group’s results reflect a “resilient performance” and were achieved through continued delivery against the group’s strategy that required decisive management action and agility.

“Our proactive approach to managing all our businesses and the group’s balance sheet has placed Omnia in a strong financial position, allowing us to resume dividends and return over R1-billion to our shareholders,” he said.

In October 2020, Omnia entered into an agreement to sell Oro Agri to European Crops Products 2 for $146.9-million. The effective date of the sale is January 7, 2021, and Oro Agri has been reported as ‘agriculture biological’ and accounted for as a discontinued operation.

Serfontein said that there was an increased focus on the company’s agriculture division, which went through restructuring, particularly in light of its manufacturing capabilities and the Sasolburg facilities.

“The biggest contribution came from our manufacturing excellence, where the supply chain optimisation, manufacturing optimisation as well as the full benefit of a new nitrate plant, which came through in our numbers – especially in the Southern African Development Community (SADC) region.”

The group’s international businesses also had an impact, he added.

The consistent delivery against clear strategic objectives resulted in improved cash generation of R2.3-billion from the underlying businesses which, together with the proceeds from the disposal of the discontinued operation, supported the ability to extinguish core term debt and contributed to Omnia’s strong financial position.

Omnia ended the financial year with a cash position of R1.8-billion.

“We are committed to create long-term value for stakeholders through sustainable business practices, the pursuit of organic and inorganic growth opportunities, greener technologies and expansion into geographies that align with Omnia’s purpose and enhance the group’s impact in the world,” Gobalsamy commented.

In terms of safety, Omnia achieved a recordable case rate (RCR) of 0.35 compared with 0.49 in the prior period for general safety cases.

Total greenhouse-gas emissions reduced to 261 500 t of carbon dioxide equivalent, 58% less than in the comparative period.

Energy efficiency and water use efficiency improved by 9% and 8% respectively, despite an increase in production volume of 15%.

Having achieved supplier recognition of 125% as well as full scores for ownership, enterprise and supplier development, as well as socioeconomic development, Omnia’s broad-based black economic empowerment rating improved to Level 2.

“The group’s positive performance extends beyond financial benefits as demonstrated by the improvement in sustainability metrics, including safety performance, empowerment, water and energy use efficiency and greenhouse-gas emissions,” added Gobalsamy.

The Omnia board was, however, carefully considering further capital allocation decisions that were value-accretive, provided the right diversification that was complementary to Omnia’s core businesses and skill set and strengthened the group’s overall positioning, the group said in the statement.

Speaking about prospects for the year ahead, Gobalsamy said agriculture and mining fundamentals were "encouraging”, adding that while market challenges and Covid-19 risks remained, each of Omnia’s divisions were “focused on driving their respective strategies, realising efficiencies and leveraging their trusted market positions to take advantage of growth opportunities”.