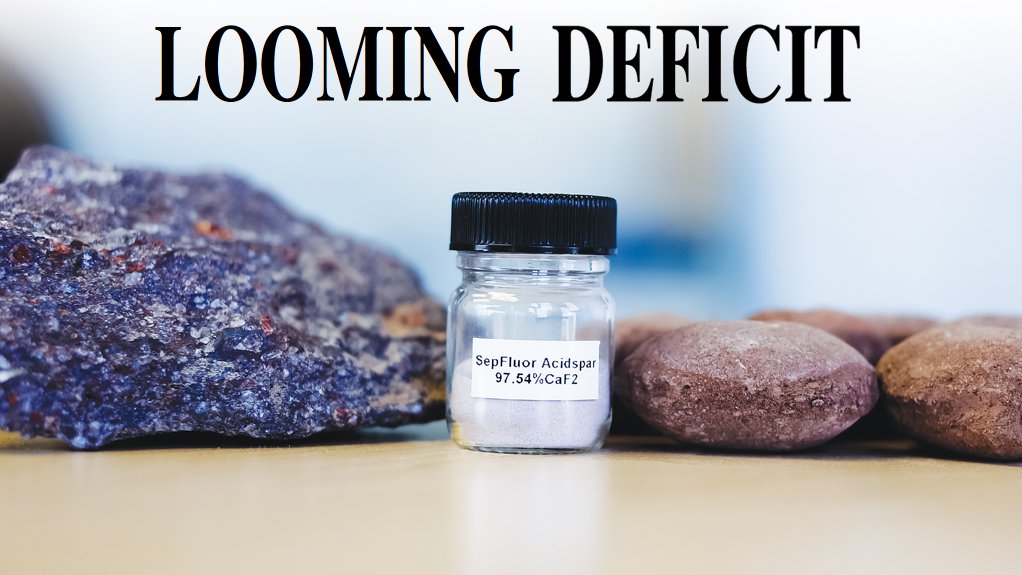 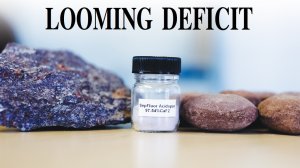 JOHANNESBURG (miningweekly.com) – Following the breakthrough of opening the first new mine in Gauteng, South Africa, in the last 12 years, which is being developed by producer SepFluor’s wholly owned Nokeng fluorspar mine, the company aims to become vertically integrated in the fluorspar value chain in future.

Fluorite ore is mined for the production of calcium fluoride (CaF2), also known as fluorspar, which is considered a valuable commodity and has a global market value of about $2-billion, according to SepFluor.

China and Mexico lead global production, with about 80% of total output, while China and Europe are the largest users, with an estimated 20% of consumption.

He points out that the country is well placed to export fluorspar, owing to the logistics provided by the Richards Bay and Durban ports, to other world markets, with about 95% of South Africa’s acidspar currently exported.

Through Nokeng, SepFluor aims to double South Africa’s current fluorspar production of about 180 000 t/y. While the fluorspar market has been in a negative cycle, with acidspar prices falling as low as $190/t to $200/t in the past two to three years, Wagner believes that the market has survived the bottoming out of the price from mid-2016 to the end of that year.

“This year, we have seen the upturn and, while we are still not 100% sure whether the upturn is sustainable, . . . our forecast is for a rising market over the next five to eight years.” Wagner says.

While prices for acidspar have been as high as $550/t in the past, spot prices have increased to close to $400/t in China in the past two to three months. Wagner attributes the price increases to China’s environmental legislation and operational closures that have driven a large shortage in fluorspar as a raw material.

He expects that some fluorspar producers will push up prices when price negotiations take place at the 2017 Fluorspar conference, which will be hosted by Industrial Minerals Events in Amsterdam next month.

Fluorspar is, however, regarded as “an obscure mineral”, having no benchmark or referencing price.

With China’s exports having decreased over several years, which will potentially result in the country becoming a net importer of acid-grade fluorspar by 2020 or 2021, SepFluor sales and technical manager Loek van den Heever notes that Nokeng has received substantial enquiries from producers in China.

Demand for the mineral will rise because of growing aluminium and steel production, the plastics and polymers market, and the use of hydrofluro-olefins refrigerants, as they have zero ozone depletion and extremely low global warming potential, he says.

He adds that Nokeng’s market studies indicate that there will be a shortfall of fluorspar of 600 000 t to 800 000 t in global markets by 2026, despite production from current operations.

Consequently, there still are prospects for SepFluor to develop another two to three mines between now and 2026.

“The overall vision is [for SepFluor] to be vertically integrated at some stage in the future and to have multiple mines,” Wagner tells Mining Weekly.

Vertical integration would entail owning a mine that produces fluorspar, as well as a chemical beneficiation plant to transform the product into hydrogen fluoride (HF) for the production of aluminium trifluoride, says Wagner, who tells Mining Weekly that vertical integration remains a perpetual prospect for SepFluor.

Consequently, the company has completed advanced studies and permitting for a beneficiation plant, and is actively working on financing for its development. The costs are expected to be more than double those of the mine, thus requiring further equity investment and debt finance.

BENEFICIATION VISION
While Wagner acknowledges that the global fluorspar market only allows for one new mine to be built every two to three years, he highlights the competitive advantage of a new chemical beneficiation plant – if brought on stream in the next two to three years.

“Competitive advantage would stem from owning and operating a plant near the mining source,” he says, adding that Nokeng’s potential beneficiation plant is envisaged to be in Ekandustria, near Bronkhorstspruit, about 50 km from the company’s mines.

“The main product would be aluminium trifluoride (AlF3), which is used as an energy reductant flux in aluminium production,” Wagner notes. A fair proportion of AlF3 could be sold to local aluminium producers, while the balance could be exported.

The HF facility will also produce anhydrite for use in the building and construction industries and in fertiliser applications. Residual available HF produced by the plant could be a key driver behind several downstream fluorine-based products and fluorochemical initiatives, Wagner further posits.

Despite the viability of the plant, he is aware that the markets could impact on downstream product pricing. He says: “Significant work [needs] to be done on establishing other downstream fluorochemcial-type industries that can be created in South Africa.”

INDUSTRIAL MINERAL
Wagner says CaF2 is “largely irreplaceable in its use” and highlights that the mineral is a critical commodity for all industrialised nations.

The mineral’s importance is underscored by its listing as one of the US’s top five critical minerals, as well as on the European Commission’s list of critical raw materials, which was revised in 2014.

HF is produced by reacting a naturally occurring mineral, fluorspar, with sulphuric acid. HF, better known as hydrofluoric acid, is one of the basic raw materials for a variety of commercial and industrial products.

The main application for HF is in the manufacture of fluorocarbons. Around 60% of HF manufactured worldwide is used for this purpose. Additionally, HF is widely used in electronics, the metallurgical industry, petroleum production, pharmaceuticals, agrochemicals and crop protection, consumer products, detergents, crystal glass and ceramics. HF is a dominant industrial source of fluorine. As a flux in aluminium production, aluminium trifluoride can reduce energy consumption by about 50%, Wagner explains.
The compound is also used to produce lithium hexafluorophosphate, used to produce the electrolyte for lithium batteries. It is further applied in end-use applications, such as aerospace, solar panels, flame-retardant clothing and composites for automotives, and has uses as an active pharmaceuticals ingredient, says Van den Heever.

FLUORSPAR HUB
Focusing on the fluorspar business “for the long haul”, SepFluor has several projects in the pipeline, with four projects – ranging from early exploration to ‘shovel-ready’ mines – envisaged for the next ten years.

Nokeng, with first production expected by the first quarter of 2019, is to be followed by the Wallmannsthal, Kruidfontein and Welgelegen/Welgevonden projects.

Construction of Wallmannsthal is expected to start by 2020 or 2021, with construction for Kruidfontein slated from 2024 to 2025. Welgelegen/Welgevonden is expected to come on stream by about 2028, Wagner says.

Work at Nokeng, which is expected to lead in terms of timing and rank in the bottom cost quartile globally when it reaches full production in 24 months’ time, is progressing well.

Nokeng’s orebody comprises a 12.2-million-tonne reserve that complies with the South African Code for the Reporting of Exploration Results, Mineral Resources and Reserves. The mine has an estimated 19-year mine life and will comprise an openpit mine and a concentrator plant, with an average run-of-mine feed rate of 630 000 t/y.

Current site activities include engineering, procurement and construction (EPC) contractor Group Five’s terracing the various levels for the concentrator plant and opening the substation area for the placement of the ground earth mat. The contractors have also started digging the conveyor line that will run under the road from the mine site to the concentrator plant.

Wagner adds that the EPC contractor’s scope of work includes the construction of a metallurgical-grade fluorspar briquetting plant at Nokeng. The briquettes will be used in steel smelting. Nokeng is still considering the economics of undertaking in-house briquetting or outsourcing the production.

Nokeng has further equipped two water supply boreholes for the main site water supply, while its site construction offices have been completed and orders for all major equipment have been placed, including for the tailings pumps.

The mine’s 20 mVA transformer, built and approved to State-owned power utility Eskom’s standards, is expected to be ready sooner than planned and will be placed in storage until needed.

“We are a little ahead of schedule in most [activities],” Wagner says.

Nokeng will further issue a mining contract tender enquiry this month, but the contractor is only expected to undertake site establishment activities early next year.

SepFluor, meanwhile, has completed a prefeasibility study for the Wallmannsthal project, for which it has secured a water-use licence and a mining right. The project has a high-grade deposit of 47.7% CaF2 in situ and an existing resource of at least 7.9-million tonnes in the measured and indicated categories.

“SepFluor needs to complete the environmental authorisation and the definitive feasibility study, after which it can construct, commission and operate the mine,” Wagner says.

Wallmannsthal, which will be SepFluor’s second greenfield mining project, will be funded from the operating cash flows from the Nokeng fluorspar mine development.

However, the granting of a prospecting permit for Kruidfontein by the Department of Mineral Resources may be “imminent”, says Wagner.