Motsepe calls on South Africans to come together to boost economy 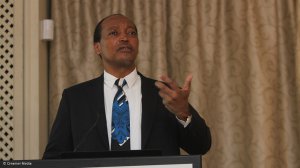 JOHANNESBURG (miningweekly.com) – Top South African business leader Patrice Motsepe on Friday made an impassioned plea to all South Africans, irrespective of political affiliation, to close ranks and focus on building an economy that is sufficiently strong to benefit the country’s entire population.

Speaking at the presentation of 51%-lower half-year headline earnings on dollar-priced commodity declines across the empowered company’s entire portfolio, the executive chairperson of diversified mining company African Rainbow Minerals (ARM) made the point that South Africans could ill afford the extreme politics of highly developed and sophisticated economies and needed to put extreme politics aside when it came to business and country and bond centrally to ensure vital economic wellbeing for all. (Also watch attached Creamer Media video).

At question time after reporting a basic earnings loss of R996-million on a R1 404-million impairment of the troubled Lubambe copper mine assets in Zambia, Motsepe said in response to Creamer Media’s Mining Weekly Online on the economic challenges facing South Africa as a whole: “When it comes to business and country, we have to focus on those things that unite us, that put us together . . . and are in the best interests of jobs, the poor and business growth.”

After outlining how ARM had managed to reduce its on-mine unit costs to levels below the inflation rate, Motsepe responded to questioning on what South Africa needed to achieve a sustainable economic turnaround.

The Soweto-born founder of the iron-ore, coal, platinum, copper, manganese, nickel and gold group that has had a meteoric rise since launching as the fledgling Future Mining 22 years ago said the extreme right-wing and left-wing political model of countries like the United States would not deliver the crucial economic sustenance that South Africa needed.

“In a country like America you can afford to have extremely hostile right-wing and left-wing views,” he said, adding America would remain an exceptionally successful economy irrespective of which political wing ran it.

But in South Africa, that unsuitable model needed to be “thrown into the deepest sea”.

Having political loyalties was fine, but when it came to developing business and economic sustainability, a move to the centre was essential in South Africa, along with focus on what was in the country’s best interests and in the best interests of job creation and business growth.

World-class business could not be run in South Africa without rules that promoted investment. Business needed to partner with government and other stakeholders to create a world-class competitive and attractive economic environment "that's good for all of us".

While at times South Africa fumbled its way through issues, Motsepe was absolutely convinced the country would pull itself right and he expressed full confidence that South Africa was on the way to an eventual economic turnaround that would benefit all stakeholders.

"We've got to stick in there . . . the commitment at all levels is in the right direction," Motsepe added. (Also watch attached Creamer Media video).

Peppered with analyst questions, ARM top-brass revealed that the company was studying the opportunity presented by the unbundling of Kumba Iron Ore out of Anglo American.

Average dollar prices realised by ARM on export iron-ore declined by 34% compared to the first half of last year as concerns about continuing increases to supply and lower-than-expected steel demand, especially in China, negatively impacted the seaborne iron-ore market.

Manganese ore prices were lower on similar supply and demand concerns, with the average realised dollar prices for high-grade and low-grade manganese ore plunging 32% and 30%.

Nickel prices fell during the last quarter resulting in the average price being 43% lower than the corresponding period.

Platinum and palladium prices were 29% and 26% lower with the 24% weakening of the average rand/dollar exchange rate partly offsetting the decline.

Capital expenditure (capex) was cut by 27% to R589-million while attributable capex at ARM Ferrous was R779-million.

The Modikwa platinum mine recovery plan was yielding positive results and Ministerial consent had been received for the disposal of ARM's 50% shareholding in Dwarsrivier chrome mine, with deal completion expected on March 31.

The company said Impala Platinum (Implats) had agreed to increase ARM's shareholding in Two Rivers platinum mine from 51% to 54% on incorporation of the Tamboti rights into Two Rivers.