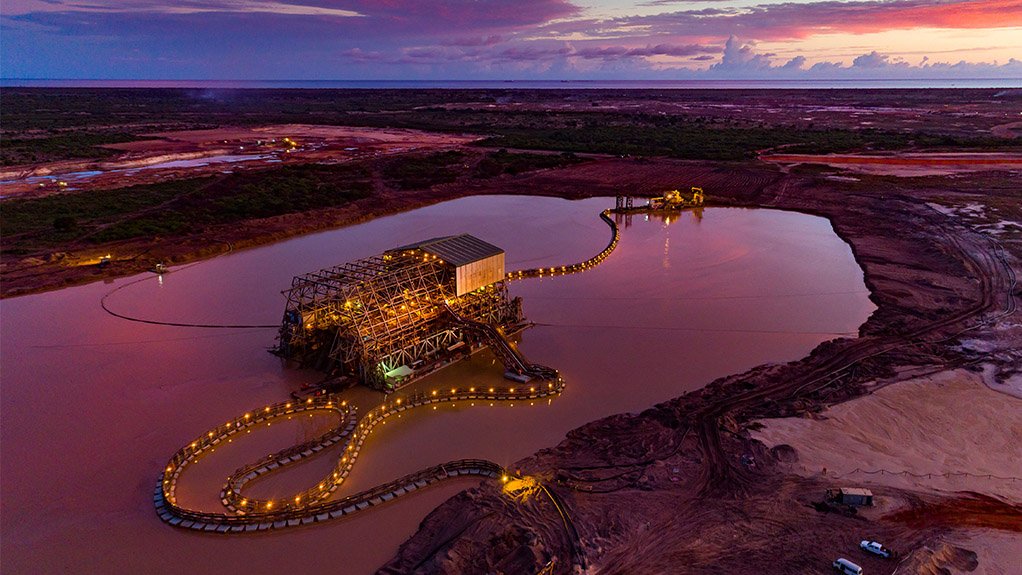 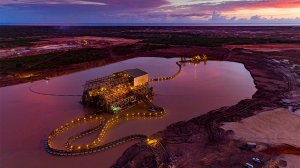 BEN BAXTER The initial key challenge of moving WCP B and its dredge was the construction of the road, which started in August 2019
THE ROAD AHEAD The road for the relocation of wet concentrator plant at Moma has a weight-bearing capacity of 8.4 t/m2
ON THE MOVE WCP B its dredge will relocated by specialist heavy lifting and transport contractor Mammoet

The construction of a purpose-built, 23-km-long, 66-m-wide road for the relocation of wet concentrator plant (WCP) B and its dredge at the Moma titanium minerals mine, on the north-east coast of Mozambique, is on track to be completed in the third quarter of this year, says Ireland-headquartered mining company Kenmare Resources COO Ben Baxter.

The road will facilitate the movement of the 7 000 t WCP B from the Namalope ore zone, where mining started in 2013, to a new ore zone, called Pilivili, which has several favourable characteristics, says Baxter.

WCP B is expected to complete its mine path at Namalope in the same quarter that the road is due to be completed.

“Pilivili is the highest-grade ore zone in Moma’s portfolio. It has strong coproduct credits, in addition to low slimes and free-flowing sand, which contribute to ease of mining and processing.”

Kenmare is targeting 1.2-million tonnes of ilmenite production, which represents a 35% growth in production, compared with that of last year. The relocation of WCP B, which is a first for Kenmare, is the final step in achieving this target.

“We considered numerous options, but moving these assets intact and by road was chosen, as it is the lowest-risk option and limits time out of production. If we had chosen to disassemble and then reassemble the WCP and dredge, it would have taken significantly longer. Every week that WCP B is not in production represents material lost revenue, as it accounts for about 40% of Kenmare’s mining capacity.”

The company also considered moving WCP B and its dredge by sea barge, as the Moma mine is close to the coast. However, this would involve increased scheduling risk, as a significant period of forecast calm seas would be needed, delaying the move for several weeks, notes Baxter.

The pumping contract to fabricate and install the 17 km positive displacement pumping system for the transportation of HMC to the mineral separation plant has been awarded to German pumps manufacturer Feluwa and civil construction project management services provider Binvic Mozambique, which will supply the overland water and HMC pipelines.

The relocation of WCP B and its dredge will be undertaken by specialist heavy lifting and transport contractor Mammoet.

The assets will be lifted from a starter pond, adjacent to the Namalope mining pond, using self-propelled modular transporters before being transported along the road, into the Pilivili mining pond.

The road, which has a weight-bearing capacity of 8.4 t/m2, will allow for the 60-m-wide plant to be transported along the road smoothly, with some clearance on either side, Baxter says.

The process will take about 48 hours, but Kenmare has scheduled up to 12 weeks of downtime, owing to the time needed to drain the mining pond, prepare the assets for the transporters and re-establish them once they arrive at Pilivili.

“We are also using the opportunity to undertake some maintenance work, as WCP B and its dredge will not be required to move again during their economic life, so it is one of the very few opportunities we’ll get to access them in dry conditions,” he highlights.

Once the move is completed, the road will serve as the main access road between the Pilivili ore zone and the main operational area at Namalope, where the mineral separation plant, camp and Kenmare’s other mining operations are located. It will also be used by the Moma mine’s host communities.

“A river-crossing is planned once the plant has been refloated, and ensuring the environmental protection and geotechnical stability of this section of the move has been imperative,” explains Baxter.

Baxter says the initial key challenge of moving WCP B and its dredge was the construction of the road, which started in August 2019, but was limited to Kenmare’s mining licence area until the environmental-, social- and health-impact assessment approval was received in November that year.

“It’s a huge civil engineering project, as it’s a road almost the width of a football pitch. We appointed specialist civil engineering contractor TPH Mozambique, part of the Teichmann group of companies, to construct the road, as well as the infrastructure terrace.”

However, the Covid-19 pandemic has presented new challenges, owing to the restrictions in place globally, particularly in Mozambique and South Africa.

Baxter says these challenges primarily pertained to the fabrication of equipment and transporting contractors into Mozambique.

Consequently, Kenmare has withdrawn its guidance for the timing of the WCP B move, but it is continually looking for ways of mitigating delays and undertaking the move as close as possible to its original schedule.

Baxter has expressed his gratitude towards Kenmare’s owner’s team, led by project director Gary Short, as well as engineering, procurement, construction management contractor Hatch and its specialist contractors, for their commitment to developing this project during the various Covid-19 restrictions.