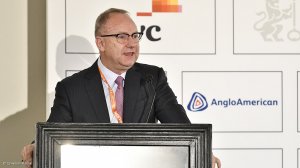 JOHANNESBURG (miningweekly.com) – Modern, sustainable and innovative mining was capable of building thriving mining communities that were healthier, better educated and employed in greater numbers, Anglo American CEO Mark Cutifani said on Wednesday when he delivered a keynote address at the Joburg Indaba.

Cutifani said communities and governments wanted the company to partner with them to achieve self-sufficiency and genuine empowerment that would enable them to prosper long after mining ceased (Also watch attached Creamer Media video.)

“This is a topic that is dear to my heart, and indeed many of my colleagues at Anglo American,” said Cutifani, who is the latest South African Mining Hall of Fame inductee for his outstanding contribution to mining over the last 12 years.

“Our employees entrust us with their lives and livelihoods. We owe it to them to seek out the best technologies and processes to make their work safer and more efficient by removing our people from harm’s way and reducing our environmental and physical footprint – while opening up the possibility for our employees to develop new skills, so that they are better prepared to meet the demands of the changing times,” he added.

Ultimately, for mining to deliver enduring value South Africa was required to embrace modern mining – in all its facets, beyond just technology – while working tirelessly to attract much-needed investment for the industry to thrive for many years to come.

South Africa needed to think differently to fulfill mining’s true potential of benefitting South African society as a whole. The new required paradigm was for mining to move from merely sharing value to helping to create enduring value for all, which required that everyone actively participate in the process.

Enduring value required sustainable and healthy returns for shareholders, a consistent contribution to the national fiscus, self-sufficient mining communities; and workforce adaptation to changes in the nature of work.

Enduring value creation required an enabling environment for investment in the sector; modern mining with all of the opportunities it brought; and the navigation of a transition sensitive to South Africa’s current financial and social complexities.

Despite mining being a cash-starved, cost-pressured and regulation-constrained industry for most of the past decade, Anglo had invested more than R300-billion in South Africa to develop the Venetia diamond mine, the Mogalakwena platinum group metals complex, and Kumba Iron Ore’s ongoing expansion of the Sishen and Kolomela iron-ore operations, and would continue to invest decisively when prospects materialised that were competitive on a global basis.

He was pleased last year to see the number of mining companies answer the call to invest in South Africa made by President Cyril Ramaphosa and the upcoming Presidential Investment Conference, scheduled to take place next month, provided an opportunity for mining to demonstrate its substantial contribution to South Africa’s economy and the country’s future growth.

“This raises an essential question for those of us who are deeply invested in the success of the South African mining sector: How do we gear ourselves for a different trajectory? There are many reasons to believe in South Africa’s mining industry, irrespective of the challenges we face, because South Africa remains one of the top-ranked countries globally in terms of mineral endowment. There is no shortage of geological opportunity,” Cutifani told the conference covered by Mining Weekly Online.

He said Minerals Council South Africa calculated that even in the absence of a greenfield exploration boom in South Africa, mining investment could almost double in the next four years if the country were to return to the top quartile of the most attractive mining investment destinations.

Such an investment doubling would create additional jobs, and materially increase exports and direct and indirect taxes and royalties paid to the fiscus.

But this would only happen with a stable and investor-friendly political climate that international and domestic investors required.

“Secondly, we need regulatory clarity and long-term certainty,” he said.

It was clear that misgivings on some of the unresolved issues in Mining Charter III could only be resolved if the industry and the Department of Mineral Resources and Energy found a solution that guaranteed the growth and sustainability of South Africa’s mining sector.

“Thirdly, we, as an industry, need to better promote ourselves. Investors must believe that we have confidence in our industry, economy and institutions if they are going to invest. We cannot achieve this when we keep pulling from different ends.

“We need an aligned voice, bringing labour, government, nongovernmental organisations and mining companies to promote the South African mining industry. I’m not for a second suggesting that we should abandon our respective positions and causes, I’m merely making the point that we’re all vested in the success of this industry and need to start acting in that way,” he said.

Following through positively in a way that enabled the country to compete effectively with other mining jurisdictions would create the certainty required for investment for the short and the long term and drive wholesale economic renewal for South Africa by an industry that already employed 453 000 people directly and 1.4-million indirectly, which benefited 4.5-million overall.

But even with these critical foundations in place, and with the necessary mining rights secured to attractive endowments, success would be challenging without a fundamental remodelling of South Africa’s mining sector so that it embraced new technology and new skills to render it globally competitive.

“The reality is that the future of mining will need to be very different if it is to be genuinely sustainable as a business prospect, in any country, and South Africa has a prominent role to play in hosting a new, modern mining industry, but it must be able to compete globally,” he said.

Crucially important was mining’s inherent ability to create long-term, sustainable economic prosperity that is not reliant on mining.

The mining industry impacted all 17 of the Sustainable Development Goals to varying degrees through its direct activities, social investments, taxes, and investment of the revenues it created.

“We can accelerate transformation and development for all South Africans,” said Cutifani.