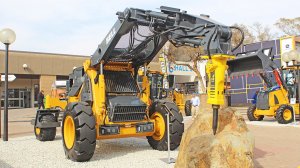 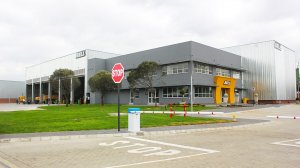 SIMILAR DESIGN Like the E-series small trucks another key aim of the new design for the larger trucks is lowering the cost of every tonne on the truck
GAINING MARKET ACCEPTANCE The upgraded E-series rockscaler has a slewing boom and a sealed air-conditioned cabin
COMMITTED INVESTMENT The Rustenburg facility has six larger workshop bays with space for 12 machines, a 10 t overhead crane and more space for better parts stockholding

This is according to Bell Group marketing director Stephen Jones, who tells Mining Weekly that the company remains focused on completing its line of Bell E-series trucks, which will include the larger B35E to B50E range of trucks, planned for release in Europe in mid-2016.

Like the E-series small trucks, which have been widely accepted in the marketplace since their introduction in 2013, the large trucks include, but are not limited to, an operator cab with efficient and clean ergonomics, low noise levels and a full-colour driving screen with reverse camera display, as well as sealed switch modules that are impervious to water and dust ingression.

Similarly, another key aim of the new design is lowering the cost of every tonne on the E-series truck, which allows for increased profitability and competitiveness. This has been successfully achieved with the small trucks and will be carried through to the larger models, Jones says.

“While mining companies have looked for, and always will look for, the lowest-cost-per-tonne equipment solution, Bell has more recently noted environmental and, particularly, safety issues have come to the fore.

“It is important to listen to these market needs, adapt business accordingly and deliver effective solutions,” he stresses.

Therefore, the company has introduced the E-series rock-scaler – an upgraded version that has gained acceptance in underground mining.

The product’s improvements include a slewing boom and a sealed air-conditioned cabin – a standard feature for enhanced safety for the cabin.

Bell Equipment has noted a trend towards smaller construction machines and has, therefore, increased the production of its tractor loader backhoes (TLBs) to cater for this demand.

The company further plans to bring its new L-series TLB into local production in 2016.

The increased demand for compact, multipurpose equipment was underlined by industry body the Construction and Mining Equipment Suppliers Association, which, in October, told Mining Weekly that “. . . 2014 was the first time during which overall sales were dominated by compact and smaller equipment, constituting 51% of overall sales, compared with 49% for larger equipment”.

Jones reiterates that the South African mining equipment manufacturing and supplier industry “is experiencing the worst downturn in business, as a result of the global drop in demand for commodities”. This market environment has curtailed new mining projects and put immense pressure on the mining industry.

These observations follow on those of Bell Equipment Sales Africa sales and marketing director Terry Gillham, who, in July, acknowledged the effects of a global decline in world commodity prices for copper, coal and iron-ore, among others.

“With no improvement in the commodity demand expected in the short term, Bell has adjusted production rates for the company’s ADTs at its factory in Richards Bay, KwaZulu-Natal, accordingly,” notes Jones.

He further stresses the lack of procurement preference, or assistance offered to local manufac- turers – a challenge exacerbated by high capital costs and extended working capital.

“This capital is required to source nonavailable components, such as engines, which have to be imported, and puts additional strain on the competitiveness of the local offering,” Jones concludes.

Heavy equipment manufacturer Bell Equipment remains committed to investing in new, modern facilities, similar to the one launched in Rustenburg, in North West, in October.

The new Bell Equipment customer service centre comprises 2 600 m2 under roof, which is built on an 8 000 m2stand.

Key features of the new premises include six larger workshop bays with space for 12 machines, a 10 t overhead crane, more space for better parts stockholding, as well as offices for sales and administrative staff.

The new workshop’s parts store is fitted with a 4.5-m-high vertical storage unit, has 60 trays and 2 270 compartments to store smaller parts.

The stores comprise a double-volume height to accommodate the construction of a second floor when needed, while a 100 kW generator has been installed to ensure that customer service is not compromised during power outages.

Preceded by operations opened in Middelburg and Nelspruit, in Mpumalanga, and in Kitwe, Zambia, the Rustenburg facility is the fourth such facility to be officially opened in the past 12 months.