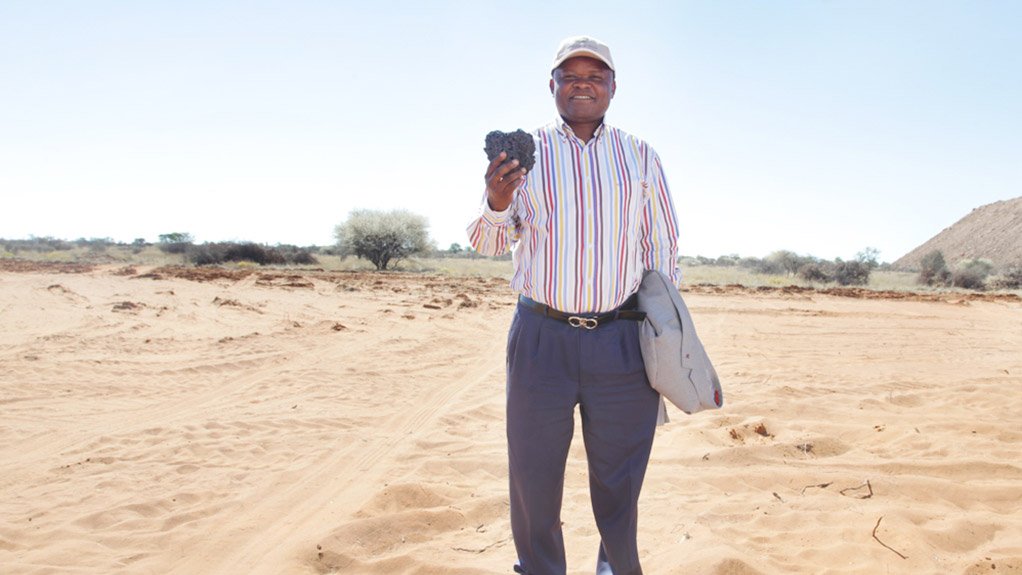 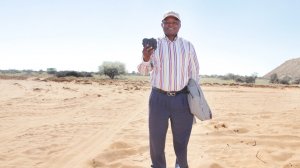 A flashback to 2003 when Ntsimbintle's Saki Macozoma, seen holding some of the hard grey manganese metal mined from the sands of Kalahari, turned the first sod at the Tshipi mine.

Ntsimbintle, headed by struggle veteran Saki Macozoma who was imprisoned on Robben Island from 1976 to 1982, is a manganese mining and exploration business born out of South Africa’s own transformation in 2002, when the government announced it wanted to broaden ownership of the country’s strategic resources.

The one-time Robben Island prisoner has been at the forefront of developing Tshipi é Ntle Manganese Mining’s 2.4-million-ton-a-year Tshipi Borwa mine, and Creamer Media’s Mining Weekly Online was in the sands of the Kalahari with him at its sod turning in 2003, along with Pallinghurst mining luminary Brian Gilbertson, who was instrumental in turning South Africa’s former Gencor mining house into BHP Billiton, the world’s biggest mining company.

Pallinghurst company Jupiter is a 49.9% shareholder of Tshipi é Ntle and the positioning of Tshipi Borwa in the lowest cost quartile at a time of rising manganese prices, resulted in Tshipi making its maiden R1-billion distribution in March.

With the manganese price remaining strong over the past few months, Tshipi has agreed to distribute a further R500-million to its shareholders in September, which will result in a total shareholder return of R1.5-billion this year.

Tshipi is one of the newest mines in the 35-km-long and 15-km-wide manganese belt of the Kalahari, which is to the hard grey metal what the Bushveld Complex is to platinum and what the Witwatersand gold basin was to gold.

During the first four months of this year, Tshipi achieved monthly production volumes capable of supporting an output of more than three-million tonnes of manganese ore a year and exported more than any other producer in South Africa.

The 500 km2 manganese field that hosts it is said to contain 20-billion tons of manganese ore at grades of 20% to 48% manganese, compared with China’s largely-below-20% grade, with lower quality manganese requiring more electricity.

Technically and geologically, South Africa has superb manganese that others can only dream about – large, thick, shallow, homogenous, continuous seams.

Tshipi’s close-to-surface manganese is mined relatively cheaply, with all the initial R1.7-billion funding that kicked the project off coming in the form of foreign equity capital, in the realisation that steel needs manganese and hardly any development takes place in the world without steel.

Ntsimbintle says in a release that dignitaries, shareholders, business luminaries and VIP guests gathered in Kathu on June 22 to honour its communities, particularly those surrounding the mine, and to commemorate the broad-based forming of Ntsimbintle in 2003 by nine black groups that have since broadened to 16, many of them from within Northern Cape’s grassroots communities.

The John Taolo Gaetsewe Developmental Trust – previously known as the Kgalagadi Rural Poverty Node Charitable Trust and  made up of members directly from the Kgalagadi district – focuses on youth development, people living with disabilities, HIV/Aids, poverty alleviation, and women and children.

This trust, a 14.44% shareholder of Ntsimbintle, is chaired by Cynthia Mogodi, who played a leading Ntsimbintle directorship role even during Mining Weekly Online’s 2003 visit.

To date, the John Taolo Gaetsewe Developmental Trust has received dividend payments from Ntsimbintle of R46.2-million, which has greatly empowered the trust to carry out its mandate of championing sustainable socioeconomic solutions for Kgalagadi’s poor and needy.

The mine also does its share in socioeconomic development through its social and labour plan, with some of its projects including a teacher development programme, a bulk water supply project, an enterprise development project, learnership programmes and university bursaries.

What is being looked forward to is the 51% Ntsimbintle-owned Mokala Manganese, which has an 80-million-tonne manganese resource, 12-million tonnes of which is amenable to opencast mining.

A feasibility study has been completed on the proposed project and the award of a mining right is imminent.

Ntsimbintle has also reached agreement with Lehating Mining and its major shareholder, Traxys Projects LP, to amalgamate into one mine the Lehating mining right and a future mining right within the Wessels prospecting area.

The upcoming Lehating/Khwara amalgamation area hosts one of the few remaining high-grade (49%) manganese deposits in the Kalahari manganese field.

"It’s an honour to be part of such an incredible journey of transformation, and to finally see the vast mineral wealth of our country being shared more equitably among the people than ever in our history,” says Macozoma, 60, whose first job in 1982 was as a soils analyst with Blasting & Excavating in Port Elizabeth, the city of his birth.

But his analyst tenure was shortlived as the police did not want him to have access to explosives, which led to his joining of the South African Council of Churches.

He later hit the high spots as Transnet’s head and sat on the boards of some of South Africa’s top corporate companies.