Govt calls for elimination of mining deaths, halt to spread of occupational diseases 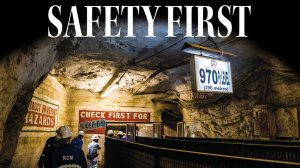 JOHANNESBURG (miningweekly.com) – The mining sector must strive to achieve zero harm by doing everything possible to prevent fatalities, injuries and the spread of diseases among workers at South African mines.

This is the plea of Department of Mineral Resources (DMR) acting mines chief inspector Xolile Mbonambi, who spoke at the Southern African Institute of Mining and Metallurgy’s 2016 MineSafe conference earlier this month.

He said South African mining industry stakeholders had to collectively adopt the fundamental stance that, if mines could not undertake mining safely, they should not mine at all until the necessary measures had been put in place to protect the lives of mineworkers.

Mbonambi emphasised the DMR’s commitment to ensuring that the milestones that were agreed on by all industry stakeholders at the 2014 Mine Occupational Health and Safety Summit were achieved within the agreed timeline.

These include the elimination of all mining fatalities by December 2020, which entails a 20% reduction in serious injuries (an injury which either prevents the injured employee from performing normal or similar duties for 14 days or longer, or which causes the injured employee to lose part of a limb or a joint or sustain a permanent disability) by December and every year thereafter until 2020.

Another goal was to achieve, from January 2017, a 20% yearly reduction in lost-time injuries – an injury that leads to employees’ being incapacitated to such an extent that he or she cannot perform normal or similar tasks the next calendar day.

Mbonambi highlighted that, since 2004, significant improvements had been recorded in the fight against the spread of occupational diseases at mines. Nonetheless, the numbers remained “stubbornly high,” as 6 577 cases of mine-related diseases were recorded in 2014.

He commented that the 2015 interim figures for silicosis had shown that there was a slight improvement, with fewer than 1 000 cases having been reported, compared with 1 063 cases in 2014. A total of 3 460 mineworkers contracted tuberculosis (TB) in 2014, while the interim figures for 2015 indicated that more than 3 460 mineworkers had contracted TB.

“This is an indictment on the industry broadly, as we all know that there is medicine available to treat TB and it is a curable disease. All stakeholders must redouble their efforts to ensure that TB is eradicated at South African mines.”

Therefore, Mbonambi stressed, achieving the 2014 occupational lung disease milestones that had been adopted at the summit was crucial to ensuring the eradication of these diseases at mines. This also entailed having 95% of all exposure measurement results below the milestone level for respirable crystalline silica of 0.05 mg/m3 by December 2024.

Mbonambi added that industry was committed to ensuring that no new cases of silicosis, pneumoconiosis and coal worker’s pneumoconiosis would occur among previously unexposed mineworkers by 2024 using current diagnostic techniques.

Moreover, he highlighted that the repercussions of fatalities extended well beyond the boundaries of mines and had substantial socioeconomic impacts, affecting the poorest of the poor locally and communities of neighbouring countries the most.

It was exceptionally important for the DMR to continue determining why fatalities occurred at mines, he remarked.

Mbonambi added that, based on the DMR’s preliminary findings, it had issued several Section 54 and Section 55 work stoppage notices this year. He explained that the department had found that such stoppages were necessary to protect workers by not allowing operations to continue in unsafe areas, which provided mines with the opportunity to ensure they solved the problems in the areas of concern.

REFUTING INSINUATIONS
Mbonambi said, in recent months, “certain mining companies” had levelled “serious allegations” against the DMR, accusing officials of using instruments that were legally available to them to further their own purposes.

The particular instrument of contention is the Mine Health and Safety Act’s (MHSA’s) Section 54 work stoppage notices. “These allegations have the potential to tarnish the integrity of government and undermine an important legislative instrument,” he said.

There are provisions for recourse in the MHSA – if an employer is of the opinion that a Section 54 instruction is not warranted, it might be appealed – but, Mbonambi said, to date, the DMR had received very few such appeals from mining companies.

FIGHTING AGAINST FATALITIES
Mbonambi urged all employers, particularly mine management teams, to take more responsibility for the health and safety of workers: “We should not place more value on profit margins than the lives of workers.”
Without mineworkers, there would be no mining sector, he said, and called on all sector stakeholders to continue working together to improve the health and safety of workers.

Moreover, Mbonambi pointed out that it was of “great concern” to the DMR that, in the year to August 31, there had been 61 fatalities recorded in the mining sector, with gold (27) and platinum (22) the biggest contributors to this “worrying tally”. A total of 51 fatalities had been recorded during the corresponding 2015 period.

He noted that more than 40% of the fatalities that occurred in 2016 were attributable to falls-of-ground (FoG) accidents, adding that the DMR was of the view that many FoG accidents were the result of companies mining in areas that had previously been decommissioned, without undertaking proper risk assessments. Mbonambi attributed this to miners seeking to “cash in” on improved platinum and gold prices.

“Hence, it is essential that, if miners are going to recommission work areas, they must first undertake full risk assessments to ensure that these areas are safe . . .”

The fatalities recorded to date this year were a major setback for the industry, which had consistently recorded improved health and safety records over the past 20 years, and which achieved its lowest-ever fatality number (77) in 2015, he said.

Mbonambi urged gold and platinum miners to pay more attention to preventing FoG accidents, transport-related accidents and the spread of respiratory diseases that continued to be major causes of loss of life.

He contended that there was generally a lack of implementation by mining companies of emergency preparedness and response mechanisms for mine accidents. Mbonambi remarked that many mines were also failing to adopt leading health and safety practices, such as pedestrian detection systems and providing their workers with adequate safety training.

DMR, he said, would continue to work with mining companies to support all health and safety initiatives. “However, we expect companies to fulfil their commitments [so] that they do not just look good on paper, but strive to achieve genuinely positive results in preventing loss of life.”

RIGHT TO REFUSE
Mbonambi noted that there was also a need to ensure that mineworkers had the knowledge and skills to exercise their rights to withdraw or refuse to undertake unsafe work or work in dangerous environments.

“The DMR continues to receive reports of intimidation and victimisation of mineworkers who decide to exercise their rights in this regard.”

He emphasised that this was contrary to the Guideline for a Mandatory Code of Practice on the Right to Refuse Dangerous Work and Leave Dangerous Working Places, which came into effect on July 1.

He stated that “all employers should walk the talk”, because the department could not continue to condone poor compliance with mine standards, as this was resulting in the loss of life.

Mbonambi also called on mineworkers to not risk their lives for production bonuses.

“The DMR has issued directives for all mines to be more vigilant and implement measures that will safeguard the lives of mineworkers to ensure the industry aim of causing zero harm to all mine employees.”

Mbonambi also lamented that women remained a target of physical, emotional and sexual harassment by their male counterparts.

“This is completely unacceptable and must be brought to an end immediately,” he stressed.