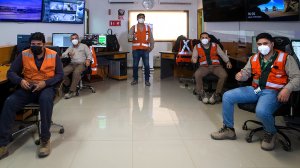 Glencore to convert surface drills to autonomous operation in Chile.
Conversion of drills and wireless network installation expected from June 2023.

JOHANNESBURG (miningweekly.com) – Diversified mining and marketing company Glencore is to convert surface drills in Chile to autonomous operation as part of the first phase of a digital mining journey.

Glencore's Compañía Minera Lomas Bayas copper mine in the Atacama Desert, northern Chile – which extracts low-grade copper oxide ore – is the first mover. Given its low grade, the mine is seen as a compelling business case.

Glencore operational excellence and technology global GM Cristian Carrasco described the initiative as the first of many expected Glencore copper group technological initiatives seeking to modernise, transform and align the business to stakeholder’s requirements and priorities.

The project is significant as Lomas Bayas will be the first to adopt intelligent drill technology globally in Glencore mining operations. Conversion of Caterpillar drills and wireless network installation is expected to be completed in June 2023.

The first phase will be completed using technology provided by US-based Flanders, which has a regional office in South Africa’s Middelburg. The 15-year-old Ardvarc autonomous system, which is agnostic to original equipment manufacturers, is said to enable advanced functionality through interoperability with fleet management systems and other data acquisition platforms.

The initial phase will provide information to continue the journey to full automation of mining equipment across the operation, Flanders stated in the media release to Mining Weekly.

“We have high hopes that the results will enable us to continue walking down this path,” Lomas Bayas mine manager Felipe Bunout stated.

Ardvarc is said to typically lift productivity by up to 30%, provide greater drill accuracy and the ability for one person to operate up to eight drills from its remote command centre, improving decision-making by integrating functions across the value chain.

Flanders regional director Martin Schafer pointed to the technology adding a financial dimension as well as environmental gains in the form of the autonomous drills having shown a 7.3% reduction in fuel compared with manned drills – a reduction of about 1 200 litres of fuel a year, the equivalent to 2 966 fewer tonnes of carbon dioxide being emitted into the atmosphere.

Lomas Bayas produces 75 000 t of copper cathode a year, with its low-grade copper ore processed by heap leaching and converted to copper cathode after processing through a solvent extraction and electrowinning plant.