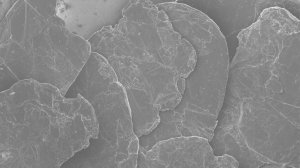 Photo by Focus Graphite
High-grade spherical graphite under a microscope.
Photo by Reuters

The Ottawa-based company said that the two premium (medium and fine) grade SPGs it had developed had achieved first-cycle irreversible capacity losses of 1.44% and 1.01%, respectively, which compared favourably against the performance of benchmark SPG grades.

Focus contended that its SPG grades might help to solve one of the critical issues holding back market growth for Li-ion batteries, which is to increase the cycling capacity of batteries.

One of the problems in using carbon-based materials in Li-ion batteries is that it forms a solid electrolyte interface layer, which produces an irreversible capacity loss, generally in the range of between 5% and 10% for benchmark SPG grades currently available in the market.

Irreversible capacity loss means that a portion of the valuable lithium and graphite within the battery is wasted with each cycle, resulting in reduced efficiency and increased costs.

The Lac Knife anode graphite had proven unique in having such a low loss, Focus said.

Further, the low surface areas of the premium coated grades of SPG could help to improve the safety of Li-ion batteries. Higher surface-area carbons in these batteries can cause the temperature of the battery to increase and possibly result in ‘thermal runaways’ occurring.

The SPG material had also demonstrated a reversible capacity of 365.08 Ah/kg.

More than half of Focus’ Lac Knife deposit is of 98% purity, low-cost, fine flake (-100 mesh) graphite, which could be affordably purified and shaped to meet future battery material demand for the anodes used in lithium-ion batteries.

In December, the company struck a ten-year offtake accord with a Chinese industrial conglomerate, to buy a minimum of between 20 000 t/y and 40 000 t/y of large, medium and fine flake graphite and value-added graphite.

The agreement came on the heels of China, which produces about 90% of the world’s flake graphite and processes most battery-grade spherical graphite, announcing it was shutting down about 20% of its flake graphite production in Shandong province, illustrating the need for reliable, low-cost, high-quality graphite flake production outside of China.

Current prices for coated, spherical graphite were at the $8 000/t point. This compared with about $20 000/t for battery-grade synthetic graphite, the only alternative for the anode in the battery.

“Commercially and competitively, these results open the door for Focus to confidently accelerate our plans to market and sell our battery-grade, high-margin products to potential partners and customers. The data presented validates Lac Knife’s potential to become a North American source of low-cost high purity flake graphite concentrate that could, possibly, lead to the production of batteries with better performance,” Focus president and COO Don Baxter said.

US automaker Tesla Motors’ intention to build a large battery-manufacturing facility in the south-west US provides the opportunity for the graphite industry to compete for the right to supply purified and shaped battery-grade materials to an industry innovator.

Tesla had announced that it intends to invest $5-billion to construct a massive battery manufacturing facility, which the New York Times had reported is expected to reduce the per-kilowatt cost of its battery packs by more than 30% by the end of the first year of volume production for its third-generation electric vehicle.

At full tilt, the factory, known as the Gigafactory, would produce about 500 000 Li-ion batteries a year by 2020, more than suppliers worldwide produced last year.

Tesla’s aim is to reduce input costs for both its electric vehicles and for energy storage units for its SolarCity solar power subsidiary, which uses Tesla battery packs for its residential and business customers to lessen and manage their dependence on electrical power from the grid.

Both the US and China had set mandatory production targets for electric and hybrid electric vehicles at one-million vehicles each by 2015/16.

It is estimated that batteries for two-million electric vehicles would create a demand for an additional supply of 160 000 t/y of high-value purified graphite. Global production of flake is currently estimated at 500 000 t/y, according to Focus.

However, the Gigafactory would also cause surging demand for other resources, most critically lithium and cobalt.

UK-based analyst Industrial Minerals Data (IM Data) manager Simon Moores said that lithium, the second largest input mineral by volume, would see demand rise by 25 000 t/y from a Gigafactory at capacity. This would represent an increase in demand from the battery sector of 50% on 2013 levels.

Mined as a mineral and processed into a chemical, lithium is used as the cathode material in both hydroxide and carbonate form.

Chile is the leading producer of battery grade lithium today.

Cobalt demand from the battery sector could rise as much as 17% on 2013 levels thanks to Tesla's plans. This is the equivalent of 7 000 t/y.

The metal is also used as a cathode material in Li-ion batteries.

Cobalt would also see rising demand. The leading supplier of cobalt is the war-torn Democratic Republic of Congo (DRC), which supplies about 55% of the world’s output.

Tesla had stated it does not get its cobalt from the DRC; however of most concern would be the lack of dedicated cobalt mines around the world, with most supply coming as a by-product such as is the case of copper mining in Africa.

“It is also important to note besides the DRC, there is no large producer of cobalt but rather many countries producing very small amounts varying from 3 000 t/y to 7 000 t/y, which collectively equate to the remaining 45%,” Moores said.

Other less critical raw materials Tesla would need include nickel, bauxite (aluminium) and copper. The company would not be using rare earths as its cars do not use a permanent magnet.