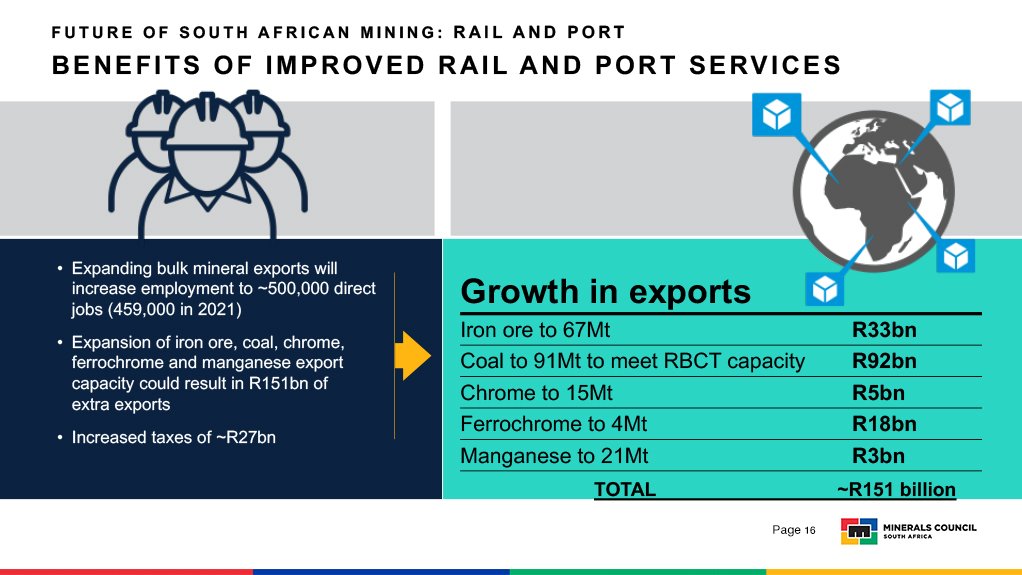 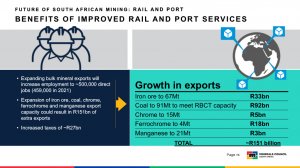 An opportunity for South Africa to become a lot more globally competitive.

JOHANNESBURG (miningweekly.com) – Expanding bulk mineral exports can increase employment to 500 000 direct jobs, up on the 459 000 of last year.

What is generally required is for South Africa to lift its export performance to levels of existing capacity.

The reward is R151-billion worth of extra export revenue.

As measured by delivered tonnages compared with contracted tonnages, in 2022 the opportunity cost for all bulk minerals – iron-ore, coal, chrome, ferrochrome and manganese – was R50-billion.

But this is not opportunity cost, this is opportunity lost, Minerals Council South Africa CEO Roger Baxter highlighted at the Joburg Indaba, covered by Mining Weekly.

Increased taxes from this would be R27-billion. Roughly 19% of every rand earned from exports comes back in tax revenue to the fiscus.

Increasing coal to 91-million tons to meet the existing capacity of the Richards Bay Coal Terminal would add an additional R92-billion.

Taking iron-ore exports to 67-million tons would add another R33-billion to the export total.

The country could get R18-billion more by exporting four-million tons of ferrochrome – and another R3-billion could be obtained from more manganese going to market.

It all hinges on getting logistics right through a partnership of State-owned companies and the mining companies themselves.

Improved rail and port services are a must because of the major benefits that will accrue.

“We need to make sure that in partnership we are focused on improving our performance and how we compete on that international playing field.

“We can be a lot more globally competitive and we think this is an opportunity for us,” Baxter emphasised.