CSIR statistics underline how significantly loadshedding has intensified during 2022

CSIR statistics underline how significantly loadshedding has intensified during 2022 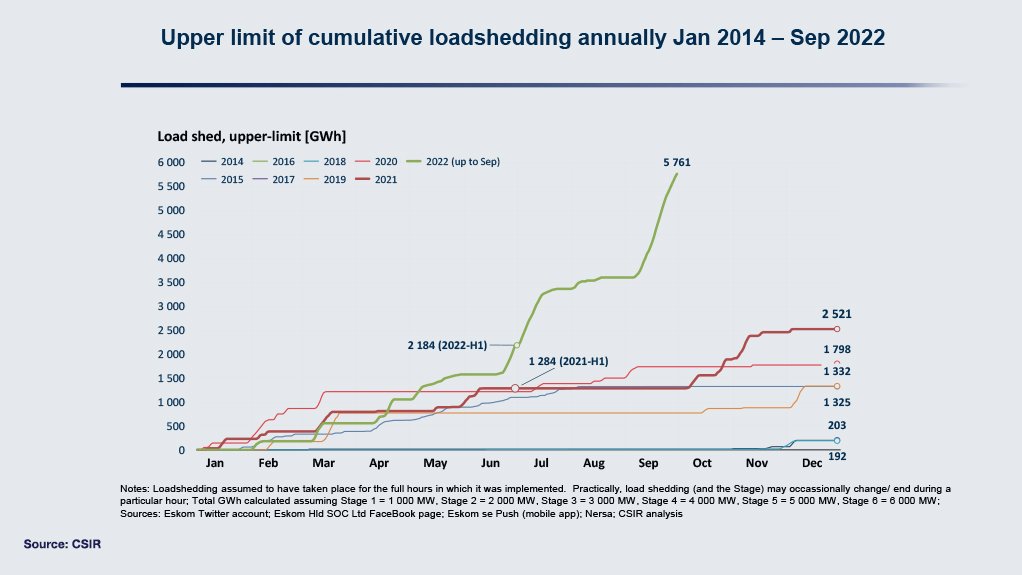 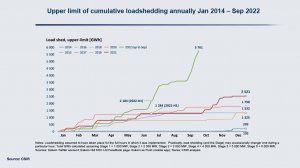 Statistics released by the Council for Scientific and Industrial Research (CSIR) underlined how significantly loadshedding has intensified during 2022, which is the first year that the majority of the rotational cuts have been implemented at Stage 4, representing 4 000 MW of simultaneous cuts.

It is also the first year since 2019 that Stage 6 loadshedding was implemented, and for far longer periods (nearly ten times longer) than was the case three years ago.

Produced by Warrick Pierce and Monique Le Roux, the publication shows that 5 761 GWh of energy had been shed by the end of September, and 1 949 hours disrupted.

Loadshedding contributing the lion’s share of the 4 315 GWh of demand-side response implemented during the nine-month period, with the balance arising from interruptible contracts.

In 2021, previously South Africa’s worst-ever year for loadshedding, 2 521 GWh of energy was shed and 1 169 hours disrupted.

The intensification of loadshedding during the year led to the July 25 announcement by President Cyril Ramaphosa of a series of interventions to address ongoing power cuts, including the establishment of a National Energy Crisis Committee (Necom).

Three priority levers were identified to close the prevailing supply/demand gap, namely: improving the performance of Eskom’s coal fleet; procuring additional capacity from the non-Eskom sources of supply and scaling up demand-side management.

To support the stabilisation for the system Necom is also targeting the procurement of a further 2 295 MW during the coming 12 months, which could arise from ongoing and emergency procurement programmes, as well as imports from the region.

Some 1 450 MW of demand reduction is being targeted through various interventions, including power alerts and other measures to change consumer behaviour.

Recent market reform allowing embedded generation plant, initially below 100 MW in size, but eventually of any size, is expected to unlock further private supply, as is an Eskom initiative to lease grid-ready land parcels to independent power producers and generation investments by municipalities.

The maintenance effort will seek to decrease unplanned outages, which have contributed to the fall in the fleet energy availability factor (EAF), while commissioning the remaining new-build units, while addressing defects.

The CSIR attributes the decline in the EAF largely to the increase in unplanned outages experienced by Eskom and also suggests that there has been a “flattening out” of the EAF during the year.

The capacity factors of the coal and nuclear plants both fell to 52.4% during the first half of 2022, having been 55.7% and 53% respectively in the corresponding period of 2021.

They show that during the first half of 2022, the total system demand was similar to the year before, but still 3 TWh (2.5%) below the pre-Covid lockdown levels of 2019.

Coal continued to dominate the South African energy mix, meeting more than 80%, or 113 TWh, of the total system load.

The contribution of wind, solar PV and CSP increased in 2022 to a total of 6.2 GW installed capacity and provided 6.5% of the total energy mix.