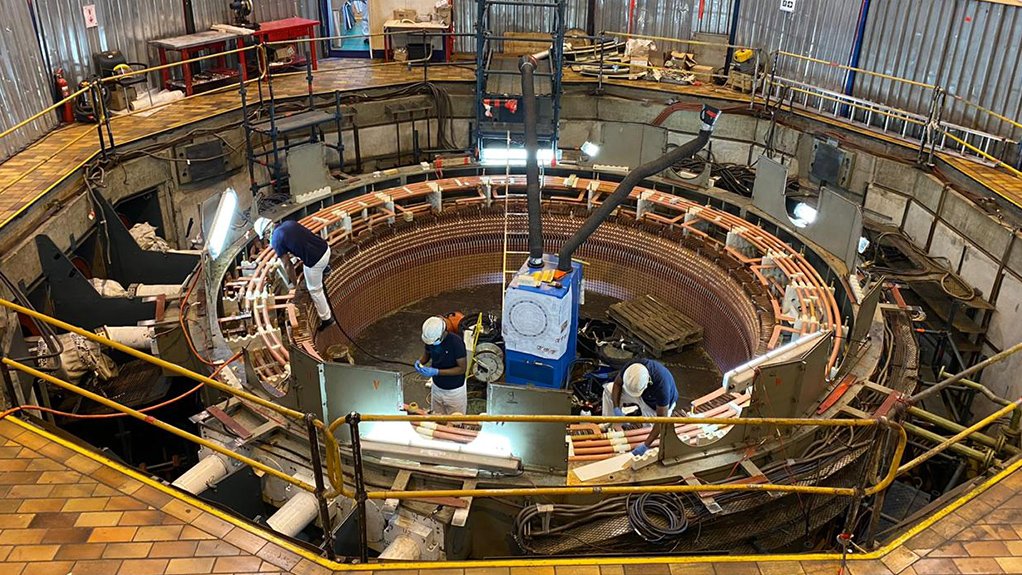 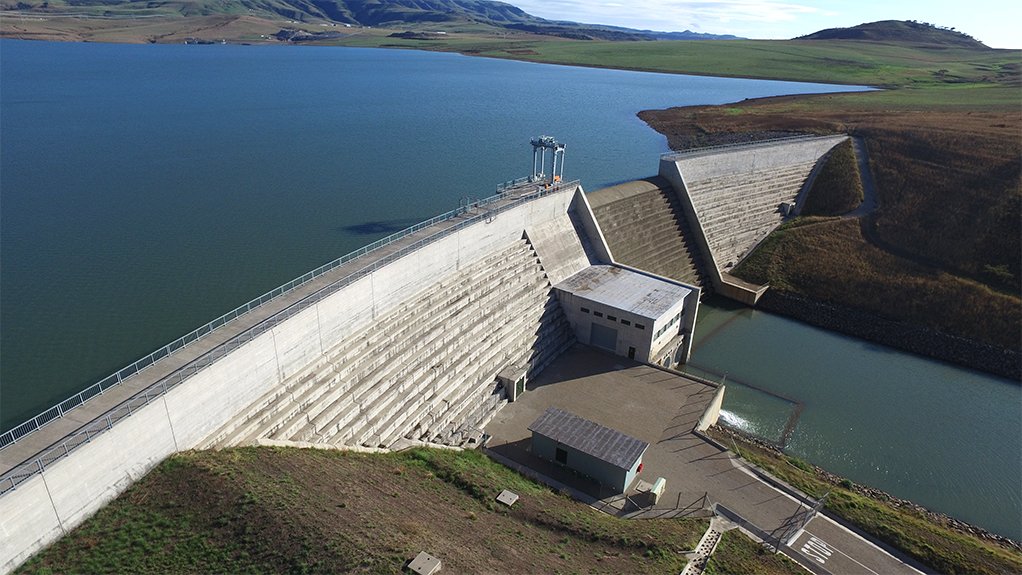 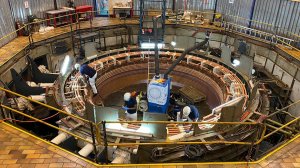 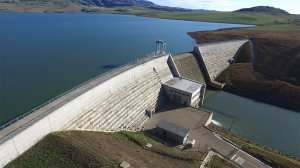 WIND UP M&C technicians worked to install several hundred stator bars as part of the complex stator winding operation
HYDROPOWER The hydro pump storage scheme provides for up to 27.6 gigawatt-hours of electricity storage in the form of 27-million m3 of water

The massive stator winding contract, which was performed by a winding team from M&C under the supervision of Voith, was the final stage in the refurbishment of three of the station’s four 250 MW motor-generator units. Eskom engaged Voith to refurbish Unit 1.

M&C divisional CEO Richard Botton project-managed the winding of the stator of the 281.5 MVA reversible motor-generator.

“We have worked with Voith over several years, during which time we have performed similar projects, such as a stator rewind at Eskom’s Ingula pumped storage scheme, among others. These have stood us in good stead and almost certainly played a key role in Voith’s decision to award us the contract for Unit 1,” he says.

The contract was scheduled to start in early 2020 but only got under way in late-August that year as a result of Covid-19 and the subsequent strict lockdowns.

“This left us with only three months to complete the rewind – half the original period allocated. We introduced two shifts per day with a 10-man team on each shift to ensure the work was completed on time,” Botton explains.

The 6.5-m-diameter stator was wound on site under Voith’s supervision after the removal of the rotor. Deploying a Voith-supplied winding kit, the winding teams were required to install a total of 720 heavy duty stator bars that had to be connected in an extremely complex bus arrangement.

“Our teams had to undergo special training by Voith technicians beforehand before getting started on it,” Botton points out. The contract was completed on schedule in mid-November of 2020.

When it was brought to Voith’s attention that the restrictions on travel between countries resulting from the Covid-19 pandemic prevented it from flying in one of its own senior engineers from Germany to recommission the unit, the company asked Botton if M&C could assist.

He recommended that M&C engineering and technical executive Rob Melaia recommission the unit owing to Melaia having previously commissioned other power plants as part of repair and refurbishment contracts M&C had undertaken. These included the N’zilo hydro station in Katanga province, in the Democratic Republic of Congo, in 2013 and the South African Bureau of Standards’ National Electrical Test Facility’s High Power test laboratory in Gauteng in 2020.

Voith duly assigned the recommissioning to M&C after checking and approving Melaia’s credentials.

Thereafter, many hours of conference calls between Melaia in his office at M&C’s main repair facility in Cleveland, Johannesburg, and senior technicians at Voith’s head office in Heidenheim, Germany, who provided detailed instructions on the required procedures.

Melaia successfully performed the recommissioning of Unit 1 over a period of five days in March last year.

“By the time I got there, I was thoroughly briefed about what I was required to do. The process was challenging and I had to give it all of my attention. The one thing that gave me the greatest confidence was knowing that M&C had done the winding of the stator. I wouldn’t have felt so confident if anyone else had done it,” Melaia says.

“It is a massive feather in our cap that M&C was able to offer to put the unit back into service. This is yet another set of skills we have in our division, further demonstrating M&C’s ability to partner with international OEMs and proving that local competency is of a high standard,” Botton adds.

“In this contract M&C have again demonstrated their ability to rewind complex large machines, including complying with the OEM’s stringent specifications. M&C also showed flexibility when encountering delays caused by circumstances outside their control by doing their utmost to ensure that the project was delivered on time,” M&C marketing & commercial executive Mike Chamberlain concludes.