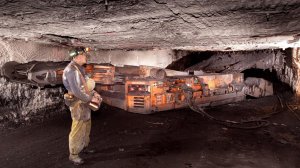 TORONTO (miningweekly.com) – US miner Cliffs Natural Resources on Friday reported that it expected to book a $6-billion after-tax noncash impairment on its seaborne iron-ore and coal assets in the third quarter, sending its NYSE-listed stock sliding as much as 10% during intraday trading.

The Cleveland, Ohio-based company said the impairment was driven by its revised outlook for long-term pricing trends for the commodities it produces and the particularly adverse market conditions for seaborne iron-ore and metallurgical coal in contrast with its more stable US iron-ore business.

Cliffs said the adjusted value of its long-lived assets would be more reflective of current market value.

The company, which underwent a management change in July, following activist shareholder Casablanca Capital’s victory in a proxy contest, added that the impairment charge would increase the debt-to-capital ratio over the 45% threshold agreed to in its debt facility.

Cliffs explained that it was working with its banking group to obtain an amendment that would eliminate the debt-to-capitalisation covenant, adding that it was “confident” that this amendment would be completed by its third quarter earnings, scheduled for release after market close on October 27.

Casablanca, under leadership of Cliffs’ new CEO, Lourenco Goncalves, early this year outlined its strategy to focus on Cliffs’ core US assets, which it believed would restore value for shareholders.

The activist advocated the spin-off of Cliffs' Bloom Lake iron-ore project, in Quebec, together with its Asia Pacific assets, to create ‘Cliffs International’.

An expansion of the Bloom Lake iron-ore mine the firm acquired through its buyout of Consolidated Thompson in 2011 was delayed in 2012, which resulted in a $1-billion goodwill impairment.

In contrast, the ‘Cliffs USA’ iron-ore assets would benefit from unique supply and demand characteristics, while barriers to entry in the Great Lakes generated strong cash flow and ensured long-term contracts, which provided volume and price visibility.

As of the end of the third quarter, Cliffs had no drawings on its $1.25-billion revolving credit facility and expected to close the quarter with about $250-million of cash on hand.

For the third quarter ended September 30, Wall Street analysts had expected an adjusted net loss of $0.01 a share on revenue of $1.29-billion.

Cliffs stock had shed more than 60% in value since the start of the year and on Friday closed down 8% at $8.74 apiece.