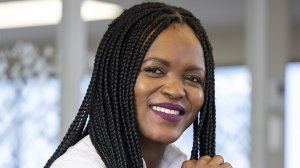 The general increase in women working in the local mining sector may not always have been a deliberate move, but minerals processing equipment manufacturer Multotec gravity concentration and polyurethane GM Christina Ramotsabi says more companies are committing to “challenging the norm”.

“The narrative is changing,” she tells Mining Weekly, adding that career expos, with more women interested in the field, are indicative of this change.

“Women are showing up and making it difficult to be overlooked,” pointing to the increasing number of women starting their own businesses in the sector, such as Fenoma, a 100%-owned and 66%-black-women- managed beneficiation and metallurgical resource support company; and 100% women-owned GNF Engineering, which provides consulting services for mine supplying and engineering projects.

However, Ramotsabi laments that women still face challenges in the traditionally male-dominated industry.

Although the challenges are numerous, she highlights a preference to do business directly with men, a general misperception about women and the way they look, and the physical strength of women.

Ramotsabi recalls such a misconception when she was questioned on whether she would be able to do her work because she had had a manicure.

“One customer commented after site work that he was skeptical and wondered how I was going to do what I needed to with my nails. Despite his misgivings, he was happy with the outcome of the site visit.”

She proudly declares: “I enjoy looking good, irrespective of what I am wearing or doing. I wear makeup with overalls – I am that girl,” adding that a woman who wears makeup is no different from a man applying moisturiser before reporting for duty.

She urges that the local mining industry, among others, should give women opportunities based on their competence and not their appearance, gender or physical strength.

“We need to trust that the women would have read through the job brief, and that they are being interviewed for a position that may be perceived to be suitable for men. Trust that women have done their research and that they have applied their minds to say that, irrespective of their physique, they can do the job,” Ramotsabi stresses.

Further, women often lose out on opportunities, owing to pregnancy, she laments, noting that “men have an advantage in this regard, as they do not miss out on opportunities and are still seen as more flexible and available than women of child-bearing age”.

Ramotsabi suggests that these challenges be mitigated through the industry and the country’s “agree[ing] that we are different” and that the change to include more women in traditionally male-dominated industries “needs to be deliberate”.

For example, she suggests employing temporary workers during the time that permanent employees are on maternity leave.

Multotec creates an environment that enables women to enter different segments of its business which enables them to progress and develop in the mining industry.

Ramotsabi says Multotec’s striving to be an inclusive and a diverse company has resulted in more women occupying senior management positions within the company that were previously mostly occupied by men.

“There have been some changes in the past few years. There are now a lot of women, including myself, in senior management roles, like Sally Nkambule, Este du Toit, Janine James, Beverly Slabbert and others.”

During her 15-year tenure at the company, Ramotsabi says Multotec has “really made progress in this area”, and its commitment to include more women “is quite visible”.

Women have also been integral to Multotec’s success in product development, research and development (R&D) and engineering, with the likes of Jeantelle Rust, Refentse Molehe and Alice Mienie being either directly involved in the launch of new products or responsible for R&D, coming up with concepts, designs and prototypes.

More women have also been appointed as applications engineers – positions traditionally occupied by men – within Multotec.

Quoting former South African President Nelson Mandela, Ramotsabi says “it looks impossible until it is done”, as she urges more women to realise that they can “achieve anything” they desire through hard work, commitment and discipline.