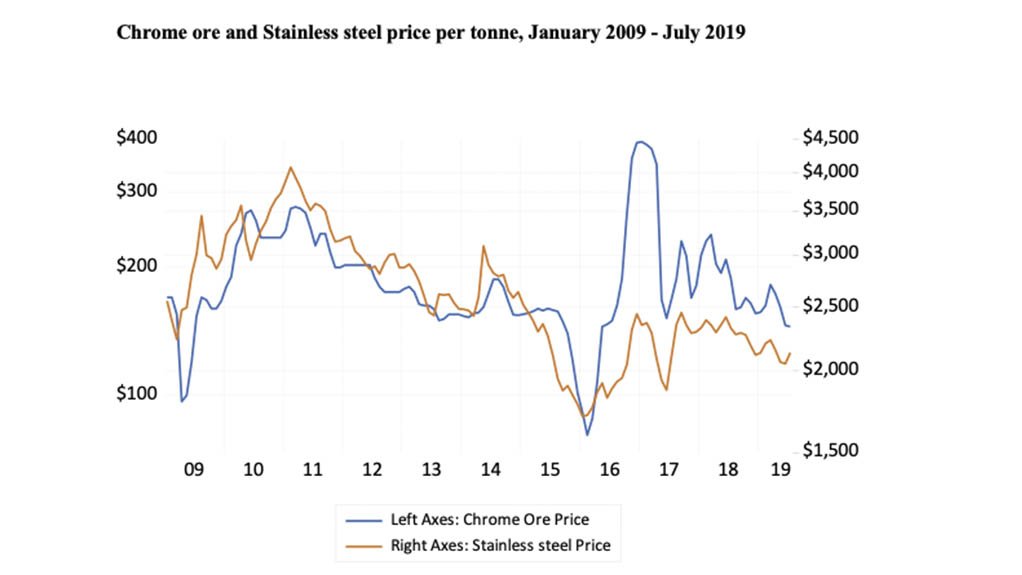 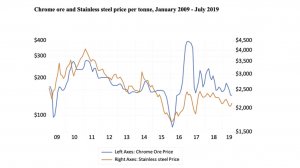 The global Stainless steel value chain is probably unique in terms of its very high levels of geographic concentration.  At the one end of the value chain South Africa produces more than 50% of global Chrome ore and is responsible for about 71% of Chrome ore exports.  At the other end, China produces 53% of global stainless steel and, because it has no local Chrome ore production, accounts for 84% of global imports. Ferrochrome, which is used in the production of Stainless steel, is also geographically concentrated, with South Africa accounting for 49% of global exports and China for 35% of imports in 2018. China’s share of Ferrochrome imports used to be much greater, but Chinese local Ferrochrome production has continued to grow whilst South African production continues to fall because of rapid increases in the price and unreliable nature of electricity supply.

Economic theory tells us that in a competitive market any rise or fall in prices should lead to equivalent changes along  the value chain, regardless of whether prices are rising or falling.  Under these market conditions one would expect, for example, that an increase in 304 Stainless steel prices would cause an immediate increase in demand (and prices) for Nickel, Ferrochrome and Chrome ore.  Similarly, a fall in Stainless steel prices would cause  an equivalent decrease in demand (and prices)  along the value chain.

But a concentrated market creates conditions for what economist call asymmetric price transmission, where price changes along the value chain are different depending on whether prices are rising or falling.  Thus, if China was able to take advantage of its dominance as a Stainless steel and Ferrochrome producer, as well as it being the largest importer of Chrome ore, one would expect a decrease in Stainless steel prices to be very quickly pushed down the value chain to help shield Stainless producers’ profit margins.  Conversely, Stainless steel producers would try boost their margins when prices rise and delay passing on such increases to Chrome ore, Nickel and Ferrochrome producers.  Similarly, if South African Chrome ore producers could use their dominance in the Chrome market to influence prices, one would expect to see export Chrome ore prices rise faster when demand is rising and for prices to fall slower when demand is contracting.

The graph above shows monthly Chrome ore and Stainless steel prices from January 2009 to July 2019.  While the magnitude of changes often differs, visually the timing and magnitude of price rises, and falls appear very similar.

This conclusion was verified by a much more rigorous econometric analysis using a Non-Linear Autoregressive Distributed Lag (NARDL) model (Le Roux, 2020).  No evidence of either long-run or short-run price asymmetry was discovered within the 304 Stainless steel supply chain.

At first glance this finding is surprising given the extremely concentrated nature of the Stainless steel, Ferrochrome and Chrome ore industries. But more careful consideration suggests the finding is perhaps not that surprising given that, although the market is geographically highly concentrated, the individual industry players i.e. Chrome ore miners, Ferrochrome smelters and Stainless steel producers are all heavily dependent on one another. This is because there are not any significant substitutes available at any stage in the supply chain, as South Africa is the only country that can provide Chrome ore in the volumes required by China, and the Chinese Ferrochrome smelters and Stainless steel producers are the only buyers large enough to consume South Africa’s Chrome ore and Ferrochrome export volumes. Furthermore, the large South African Chrome ore and Ferrochrome producers all have sales teams based in China who gather market intelligence and negotiate prices with Chinese Ferrochrome smelters and Stainless steel producers on a daily basis.  Price information is thus very efficiently distributed, and all players would immediately be aware in the event that they were being taken advantage of. It is thus not in the interest of any of the large market players to exploit their dominance for their own advantage at the expense of other players in the supply chain.

More worrying is that the tax could change the historical nature of price transmission within the stainless steel value chain.  Chinese Ferrochrome producers may seek to claw back the higher input cost imposed on them by not passing on future increases in Ferrochrome prices to Chrome ore exporters.  An industry previously characterised by price symmetry may become one in which price asymmetry prevails.  The beneficiaries of this change are unclear.