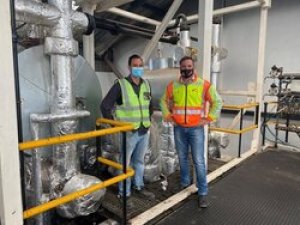 South African chemicals group AECI Much Asphalt and carbon negative materials producer Origin Materials have launched a programme to create a novel low-carbon bitumen that is expected to create considerable value in the developing African market.

“Bitumen is the glue that holds the whole asphalt mix together. It aids in compaction during the paving process and provides durability and stiffness.”

He mentions that at the heart of the programme is Origin Materials’ patented technology which turns inexpensive, sustainable wood residues into carbon-negative, cost-advantaged materials.

It reduces the need for fossil fuels and provides stable pricing largely decoupled from the volatile petroleum supply chain.

Marais say that this programme is significant owing to the vital role of bitumen in asphalt production. “As the binder, it influences the long-term performanceof asphalt.

He adds that AECI Much Asphalt already includes up to 40% reclaimed asphalt in its products. This has resulted in not having to mine more than a million tonnes of aggregate and not refining approximately 53 500 t of bitumen, since 2012.

“At the same time, the alternative binder is also an opportunity to ensure sustainability in the South African asphalt and bitumen market.

With the closing of the Engen refinery and recurrent production challenges experienced by other local refineries, South Africa has become a net importer of bitumen over the past year,” says Marais.

Marais highlights that the 10/20 bitumen is commonly used in the production of high modulus asphalt – EME - which is well suited to high trafficked roads likely to suffer significant fatigue and stress.

“While the demand for EME incorporating 10/20 penetration grade bitumen is growing in South Africa, it is anticipated to increase exponentially when the major N3 freeway contracts are awarded.

“Currently, this grade of bitumen is only supplied by one South African refinery.”

He adds that other local refineries have been unable to produce 10/20 bitumen owing to higher demand for other “normal” grades and difficulty in meeting the required specifications. Unforeseen breakdowns and scheduled shutdowns at refineries add to the problem.

“AECI SprayPave acquired a multistage bitumen converter from Technix Industries in New Zealand, only the second to be commissioned worldwide.

“The technology enables the business to convert the feedstock bitumen that is available locally to grades that are both lower in penetration and higher in softening point.

“This can be done predictably and repeatedly. Throughput of 30 t/d to 60 t/d can be achieved when converting from conventional 70/100to 10/20,” Marais concludes.