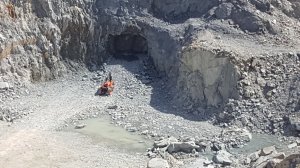 TSX-listed miner Guyana Goldfields has started underground development at the Aurora mine, in Guyana, completing the first blast on the Mad Kiss portal.

The blast is a key milestone and marks the start of underground construction, president and CEO Scott Caldwell reported on Friday.

The company stated that the contractor would complete and reinforce the collar and extend the decline 200 m to fulfil the scope of the early works phase. This should be completed early in the first quarter.

Guyana further reported that it was finalising the review of bids received for the underground development contract with the target of final award in the fourth quarter of 2018.

The plan is to advance the exploration decline about 2 500 m and provide a platform for further underground exploration and definition drilling.

The decline is intended to provide access to all principal underground mining areas, including some higher-grade zones in Mad Kiss and East Walcott that could potentially provide supplemental mill feed during the development period.

“The decline provides an ideal platform to potentially upgrade and expand the current underground resource and unlock the full potential of the Aurora deposit,” Caldwell stated.

The underground operations will deliver 2.1-million ounces of the 3.8-million ounces that the Aurora mine will recover by 2033. The 2018 optimised life of mine plan (2018 to 2033) contains a total of three-million tonnes of ore grading 2.87 g/t gold.