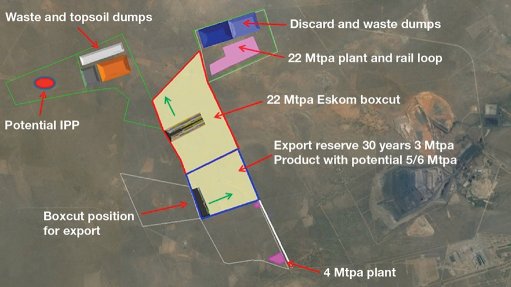 ASX- and JSE-listed Waterberg Coal Company (WCC) has submitted an application to the Department of Energy (DoE) – through its subsidiary, Waterberg Energy Company – to establish a coal-fired independent power station with an initial capacity of 600 MW to support power generation for its Limpopo-based projects, WCC CEO Stephen Miller tells Mining Weekly.

Although WCC aims to substantially increase this capacity over time, he emphasises that the company does not intend to be the owner, operator and manager of the plant. “We only intend to be a participant in the [plant] through the supply of coal.”

Miller notes that the plant will be configured to use the lower-quality coal, derived from export coal production and also from its Eskom coal project in due course.

“We will export RB1 and RB2 export-grade coal of between 24.5 calorific value (CV) and 27 CV,” he says, adding, however, that a lot of mined material which does not fit into these coal-quality categories will be stockpiled.

Miller says that, if the low-grade coal were not used as fuel for a power station, it would have been used as backfill for the WCC’s opencast mining process, with transporting the coal from mine to power plant being the only marginal cost.

He highlights that such a cost would be minimal, as the land on which the plant will be located is only 5 km from the mine site, and a conveyor will be used to move the coal.

“It would be a seamless transition from mine pit to the generating facility,” states Miller.

Additionally, he notes that the proposed site of the IPP is less than 12 km from the existing main power-transmission line into which the electricity generated by the plant will be fed.

Miller also points out that the Medupi power station is located only 15 km from the proposed plant site and, as Medupi is nearing completion, a pool of trained local workers will become available to work on the power station.

“This will allow us to consequently save a significant amount in training time and costs, thereby ensuring much greater efficiencies in the construction and operation of the [power station].”

He tells Mining Weekly that the company is in discussions with several of its industry partners that have the required skills, technology and funds to help develop the plant.

Miller expects the DoE to make a decision on the company’s application to develop a plant by the end of this year.

He adds that the WCC, which has resources to ensure a life-of-mine of at least 100 years, has coal reserves that are more than sufficient to supply not only one 600 MW coal-fired power station but multiple power stations of this size and larger.

“In fact, since companies have become aware of our development plan for the Waterberg, we have actually received several enquiries from industry players about potentially selling coal to them to fuel their [power stations],” Miller says.

He therefore believes that there is significant long-term potential for the WCC to supply several power stations in the region, particularly amid State-owned power utility Eskom’s power supply constraints.

“This would provide us with an additional source of revenue generation.”

The mine and the power station will use significant amounts of water, and one of the main constraints of developing the Waterberg region has been the water shortage in this area.

However, Miller informs Mining Weekly that the WCC concluded an agreement in January with the Lephalale municipality, which manages the largest town in the Waterberg area. The agreement entails taking over and running one of the municipality’s two wastewater treatment plants in return for being able to use the ten-million litres a day of wastewater that the plant currently produces.

“Some of the water offtake will be recycled and used for municipal requirements. The rest of the wastewater will be used to build our mines and the future [power station],” he explains.

WCC believes that this is good use of existing infrastructure and it will soon start with upgrades to the plant to improve operational efficiencies. Miller says this initiative, together with the “considerable volumes” of water available from boreholes on WCC properties, should be sufficient to meet the requirements of the export project and the IPP.

He adds that, as an additional support measure, WCC has applied for an allocation of water from the R15-billion government-supported water schemes, the Mokolo Crocodile River Water Augmentation Project 1 and 2, as these project pipelines will run along the southern boundary of WCC properties.