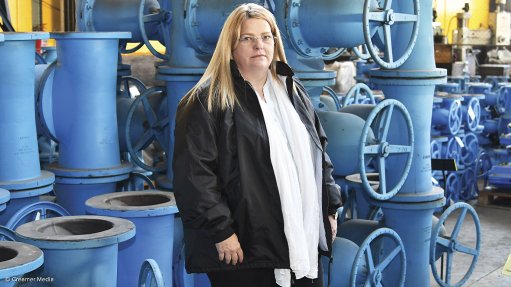 Valves supplier Invincible Valves has bought another property to expand its operations, along with accompanying plant equipment and machinery.

The new property in Germiston is on the same street as the current facilities.

Invincible Valves MD Pam du Plessis tells Mining Weekly that the new facility will house the manufacturing, reconditioning and rubber-lining capacity of the business, while the rest of the operations will continue at the original site.

“This move will make our operations more efficient while enabling us to expand our capacity significantly,” she says.

The new premises should be fully operational by next month.

Du Plessis explains that the additional premises are part of the company’s strategy to diversify its offering while taking advantage of the soft market to see markets strengthen again in the medium term.

About 68% of Invincible Valves’ income is derived from exports. The company also engages in project work and manufactures its own range of valves.

“All this work is done in-house now, particularly rubber lining. We even do our own rubber lining on imported valves to make sure it is done according to the right standards,” she explains.

Du Plessis adds that a consulting engineering firm has been contracted to determine the optimal workflow in the new facility to ensure that, upon commissioning, no rearranging or redesigning of the shop floor will be required.

The company has also opened a series of satellite branches around South Africa to provide better access to servicing and parts for clients in key critical areas of the country.

“Currently, all our stock is held on the main premises in Germiston. However, we aim to disperse some of that stock to the satellite branches to reduce the time and cost of delivering stock to key clients in remote areas,” she explains.

She believes that this strategy will make the delivery of stock more efficient and also ensure better market penetration while capitalising on a competitive advantage in terms of capacity to provide improved client service.

Invincible Valves has had a satellite branch operating in Mbombela since 2015, which services the mines in Mpumalanga.

This has proven to be so successful that a second branch was opened in Polokwane, in Limpopo, in October last year, which Du Plessis says was an immediate success.

Invincible Valves aims to have a third satellite branch, to service the Western Cape, operational by April. No property has been allocated for the premises yet, which would be dependent on the location of the sales representative appointed.

She says that the opening of another satellite branch in the Free State is being planned for later this year, which will serve the Free State and Northern Cape.

“Using this strategy, the company has had significant success in Ghana and the Democratic Republic of Congo,” she says, adding that, while there has been uptake in other African countries, growth in those countries has been slower.