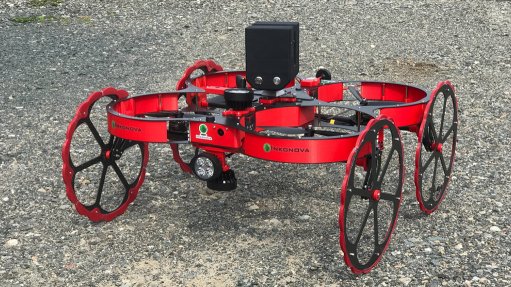 TILT RANGER The underground mobile scanning system is the first of its kind available in Africa, and is distributed through Mining Technology Suppliers

It is inevitable that advances in robotics, the Internet of Things and artificial intelligence will impact on the mining survey industry, says surveyor Johan Weakley.

He explains that, through the collaboration of Canadian geotechnical solutions provider Clickmox Solutions and Swedish drone developer Inkonova, it is now possible to map underground areas with an unmanned aerial vehicle (UAV) using scanners employing a simultaneous localisation and mapping (Slam) algorithm.

In this way, it can provide three-dimensional (3D) profiling and mapping of caved-in areas, stopes, ventilation shafts, ore and/or waste passes, mine drifts and other underground mine openings.

The underground mobile scanning system – which is the first of its kind available in Africa, and distributed through Mining Technology Suppliers – was tested in various underground mining operations in Canada, and was first launched at the 2016 MinExpo conference, in Las Vegas, in the US.

The system has since been used in a variety of trials and case studies, including to map three inaccessible stopes in an underground gold mine in Mali.

“The TILT Ranger has been designed to carry a payload capacity surpassing 1 kg and is designed in a way that provides a stable platform for the scanner . . . the Slam algorithm software makes it possible to produce a map (in global positioning system-deprived areas) of the area the UAV traversed while the scanner was running.”

The scanner, best suited to applications that terrestrial vehicles or humans cannot access, typically produces models and images similar to those obtained by stationary scans, owing to its scanner having both moving and stationary scan capabilities. The system can be used to map anything from day-to-day production to areas that are potentially dangerous because of slope instability, Weakley explains.

“The first and most obvious benefit is . . . safety. One can collect data in areas inaccessible to personnel owing to dangerous working conditions,” notes Weakley. He adds that the system will also add value to any mine rescue team, in addition to the “more routine drone applications”.

Additionally, the compilation of data will take “a fraction of the time” that it takes other systems, such as closed-circuit monitoring systems, to compile data. Once the underground drone system has been commissioned, it is “easy” to map mine development and other areas quickly and effectively, says Weakley, adding that these kinds of systems will “undoubtedly . . . become the mapping tools of choice . . . in a short space of time”.

The system is easy to transport and set up, compared with other underground mapping systems. The TILT Ranger is equipped with carbon fibre propeller protection and wheels, enabling it to fly over and roll on horizontal surfaces and steep inclinations.

Weakley states: “Because this underground mobile scanning system is a relatively new concept, its implementation should be considered and assessed by all possible future users.”

Some of these considerations include training, “specialised personnel to fly the drone and to operate the system as a whole”.

Processing and implementing all the scanned data into the relevant users’ systems will also have to be assessed. “Implementation of the system would probably call for a small team of dedicated, competent and knowledgeable operators and technical personnel, but the potential benefits will be significant,” Weakley stresses.

As part of its drive to improve its product offering, Inkonova introduced a drone with a new collision-avoidance system late last year. This UAV reduces operator input and, thus, possible pilot errors.

Clickmox has also partnered with US-based autonomous flight and aerial solutions software developer Exyn Technologies to test a fully autonomous drone with 3D scanning capabilities for underground mines in different underground locations. It is expected that the fully autonomous system will be ready for release in about three months’ time, Weakley concludes.