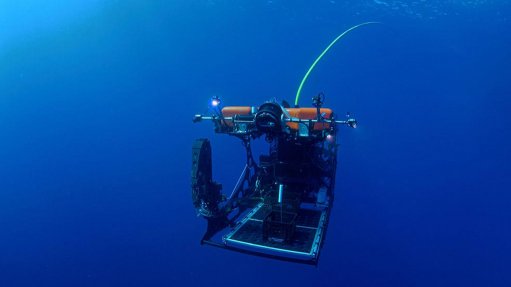 Steenkamp’s assertion is corroborated by independent geologist Dr Johan Hatting, who confirms that 4% of the diamonds emplaced in kimberlites in the Southern Africa subcontinent can be accounted for through production and resource data onshore, while the remainder can be found in the Atlantic Ocean.

Hatting indicates in his March 2018 research report, ‘Diamond Potential of the West Coast of South Africa’, that offshore deposits have the same diamond grades as their onshore counterparts and, in most cases, “boast even better grades”, owing to the added enrichment caused by the re-deposition of the eroded and relocated diamonds. He further enthuses that the offshore diamond deposits on the country’s West Coast are a largely untouched and undiscovered resource.

Despite the potential wealth presented by marine diamond deposits, Steenkamp suggests that midwater marine diamond mining has previously been inhibited by a lack of effective remote mining tools. He states that large companies, such as global diamond mining company De Beers, have managed “to flex their financial advantage” by effectively deploying subsea crawlers in deeper marine mining areas that are more conducive to excavation equipment, owing to their flat seabed.

“The midwater seabed – which refers to the ocean floor at depths between 30 m to 60 m – has virtually been untouched because it is too deep for the effective use of divers, while crawlers are not able to traverse the rugged, uneven seabed,” says Steenkamp.

He explains that remote technology that marries a jet pump to an auger head with gears capable of cutting and crushing rock is now a reality, while powerful miniature cameras that can operate in underwater depths of more than 100 m are also now available off the shelf. These small cameras and powerful light-emitting-diode lights can be used to effectively monitor remote mining operations on the seabed, with the development of new infrared technology further enabling an operator to “read” the ocean floor and find trap sites at bedrock depths, he adds.

Steenkamp suggests that junior mining operations will be able to deploy highly effective mining vessels that can pump enriched diamond concentrate from the seabed 24/7, and be operated by a crew of 30 professionals. He states that using this method will prove to be a more cost-effective and lucrative mining operation as opposed to a land-based counterpart.

Steenkamp concludes that the diamond mining industry is “now standing at the dawn of a new exciting marine mining era that will deliver spectacular results”.